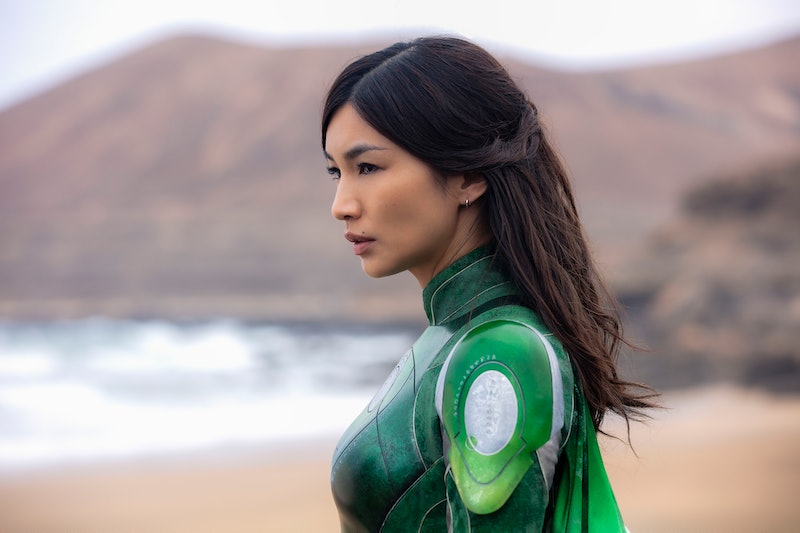 The post-credits scene — a sequence added at the end of a feature, which acts as a coda or postscript to its events — has become a standard element of the Marvel Cinematic Universe: fans know not to leave their seats until the screen cuts to black, lest there be yet another teaser queued up.

The MCU’s latest movie, the Chloé Zhao-directed Eternals, is no exception. It offers viewers not one, but two such scenes, both of which hinted at exciting things to come. So, what happens in the Eternals post-credits scenes?

Three of the Eternals — Makkari (Lauren Ridloff), Druig (Barry Keoghan), and Thena (Angelina Jolie) — are aboard the team’s spaceship. They’ve set out in search of Eternals living on other planets, whom they hope to warn about Arishem’s true plans. Still, they can’t help but worry about what’s happening back on Earth, as they haven’t heard from their teammates for some time.

Then, out of nowhere, two curious new characters teleport into the ship: Pip the Troll and Eros (Harry Styles). Eros introduces himself to the Eternals, explaining that he’s come to help. “Your friends are in big trouble, and we know where to find them,” he says. Eros is an Eternal himself, so he seems well positioned to aid the team’s quest.

The Second Scene Teases Kit Harington’s Future In The Franchise

Just before Sersi (Gemma Chan) was kidnapped by Arishem at the film’s close, her boyfriend Dane Whitman (Kit Harington) mentioned something about his family history, and seemed poised to reveal a crucial detail about his identity. Viewers didn’t get to learn more during the movie itself, but during the second post-credits scene, Dane takes center stage.

He’s seen opening a mysterious box to reveal a curious sword — a sword fans can assume is the Ebony Blade, the Black Knight’s trademark weapon. He approaches it cautiously, before an offscreen voice asks, “Sure you’re ready for that?”

In the comics, Dane takes up the mantle of the Black Knight, a position that’s been passed down in his family from generation to generation since the Arthurian Age. Whoever bears the title of the Black Knight at the time wields the Ebony Blade, and must wrestle with its curse: the longer the sword is used, the more bloodthirsty and violent its user will become.

Harington hopes he’ll be able to tell more of Dane’s story — and given this post-credits introduction to the Ebony Blade, it seems like he’ll get a chance to do just that. “I had read up on who [Dane] could be, or might be,” the actor told Total Film. “So there’s the possibility for a longer trajectory. And hopefully, I think this is the tip of the iceberg for my character.”

Dont have Disney+ yet? Sign up here to stream everything Marvel.

More like this
Why Did Meatball Leave 'The Bachelorette'? His Second Chance Didn’t Last Too Long
By Grace Wehniainen
Memes & Tweets About Logan Switching From Rachel To Gabby On 'The Bachelorette'
By Grace Wehniainen
The 'PLL: Original Sin' Creators Say A’s Identity Will Be “Very Clear” By The Season Finale
By Alyssa Lapid
'The Sandman’s Ending Is A Departure From Neil Gaiman’s Comic Book Series
By Kadin Burnett
Get Even More From Bustle — Sign Up For The Newsletter

This article was originally published on November 4, 2021