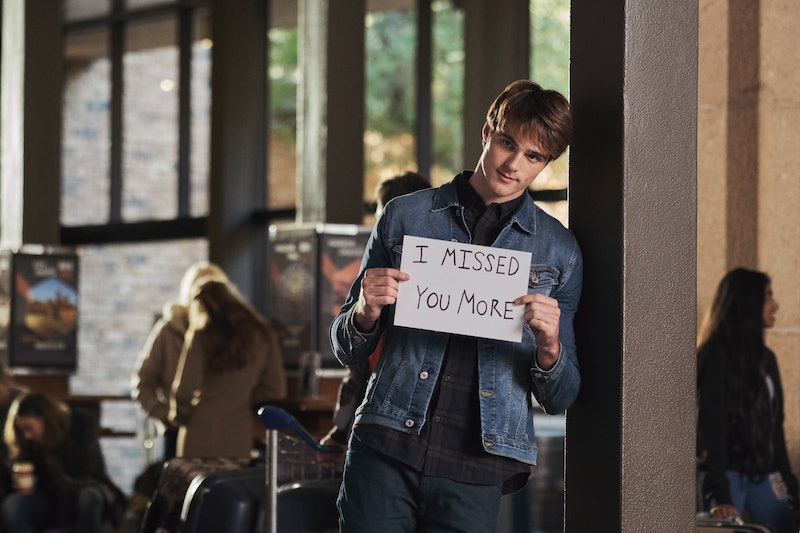 Within days of The Kissing Booth 2’s Netflix premiere, fans learned that The Kissing Booth 3 is definitely happening and will hit the streaming platform in 2021. That’s great news considering — spoiler alert — The Kissing Booth 2 ended with Elle’s fate up in the air in a pretty epic way. After struggling to decide whether to join Noah at Harvard or go with Lee to UC Berkeley, Elle opted to lie instead, claiming that she had been waitlisted for both colleges, leaving both her and viewers with a lot of unanswered (and seriously important) questions.

“She’s really good at getting herself into a pickle, that’s for sure,” King told Entertainment Tonight, regarding Elle’s big cliffhanger. “Elle Evans is notorious for trying to make everybody happy, which in turn, the way she goes about it, makes everybody mad in the long run, including herself.”

However, that isn’t the only dilemma on Elle’s plate these days. She’s also stolen the heart of Marco, who seems just as determined as ever to win her affections despite the fact that she and Noah are still together. But how will this all factor into the storyline moving forward? Here’s everything that’s been revealed so far about The Kissing Booth 3.

Will Jacob Elordi Be In The Kissing Booth 3?

Though some fans may be worried about the actor’s busy work schedule interfering with his continued involvement in the Kissing Booth franchise, never fear. Despite the prominent role he plays on the HBO hit series Euphoria, Elordi is definitely coming back to play Noah for the third film. In fact, he even popped up in the special sneak peek of the third installment, solidifying that he isn’t going anywhere anytime soon.

Who Else Will Be Returning?

Along with Elordi, the film’s core cast members King, Joel Courtney, Taylor Zakhar Perez, Maisie Richardson-Sellers, and Meganne Young confirmed during Netflix’s #TKBFanFest livestream on Sunday, July 26 that they are reprising their roles for The Kissing Booth 3. So yes, get ready to have the gang all back together again. And, unfortunately for Elle-Noah shippers, this does mean that Elle will still be smack dab in the middle of her unresolved love triangle between Noah and Marco.

Was The Kissing Booth 3 Delayed Due To The Coronavirus?

Though most film and TV productions were forced to shut down in the wake of the COVID-19 outbreak, fans didn’t have to worry about The Kissing Booth 3 being delayed due to the coronavirus. As it turns out, the third installment in the series was already filmed in secret.

When Will The Kissing Booth 3 Premiere?

As King accepted her People’s Choice Award for Comedy Movie Star on Nov. 15, she got a little more specific than the general 2021 premiere date that Netflix had been promoting. “I told myself that if I won, I would share a very exciting piece of news with everybody, so I want to tell you that Kissing Booth 3, our final installment, is going to be released in summer 2021!” she revealed. And on April 27, 2021, Netflix confirmed the third Kissing Booth installment would premiere on Aug. 11.

That’s one detail that will have to go unanswered for now. The third movie will take place during the summer before Elle heads off to college and will center on her decision of where to go, according to Deadline. Considering that the clip shows her ignoring a call from the Harvard administrations office, that may not bode well for her future with Noah. Only time will tell.

This post will be updated with the trailer as well as additional plot details as more information on The Kissing Booth 3 becomes available.

More like this
Here’s Everything Coming To & Leaving Netflix In February
By Jake Viswanath
'The Queen’s Gambit' Season 2 Tweet Wasn’t From Anya Taylor-Joy
By Mary Kate McGrath, Jack Irvin and Grace Wehniainen
Netflix Shut Down 'Bridgerton' S3 Rumours About A “Very Dark” Storyline
By Bustle
Pamela Anderson’s Dating & Marriage History Could Be Its Own TV Series
By Jake Viswanath
Get Even More From Bustle — Sign Up For The Newsletter
From hair trends to relationship advice, our daily newsletter has everything you need to sound like a person who’s on TikTok, even if you aren’t.

This article was originally published on July 27, 2020