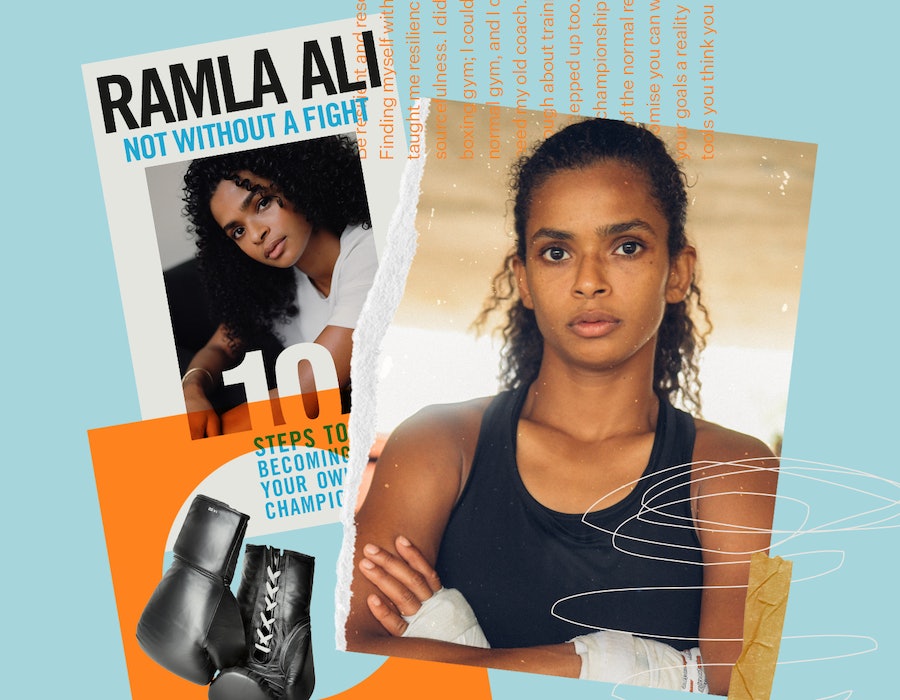 “I hope it will inspire many of you to find your own fight and be your own champion,” tweeted boxing champion Ramla Ali of her debut book at the start of the summer. It is a simple tweet, you might think, but one that speaks volumes about the author. While direct and concise, she’s also compassionate, uncomplicated, honest and humble, constantly striving to create change.

Ali has been breaking boundaries from the word go, and her remarkable story – both in and out of the ring – forms the basis of the book. Published by #Merky Books on September 23, it charts the key fights that have brought her to where she is today: a gold medalist, activist, model, and now author.

From her arrival in England as a conflict refugee, to her start in boxing (which she purposefully hid from her family for years), her first fight in the National Amateur Championships, and becoming the first Somali boxer to compete in the Olympics, Ali’s approach is forthright and candid throughout, avoiding any potential to veer into X Factor-style sob-story territory. The narrative is not devoid of emotion, rather imbued with the drive to tell her story in order to create positive change in the lives of others.

Part autobiography, part inspirational guide, each major fight is followed by succinct takeaways that distill the life lessons Ali has picked up along the way into actionable advice. Below are five of her inspiring mottos which, frankly, we’d all be wise to live by.

Not Without a Fight: Ten Steps to Becoming Your Own Champion
Penguin

Excerpt from Not Without A Fight by Ramla Ali

Be resilient and resourceful

Finding myself with no club taught me resilience and resourcefulness. I didn’t need a boxing gym; I could train in my normal gym, and I certainly didn’t need my old coach. I knew enough about training, and Richard stepped up too. If I can train for a championship fight without any of the normal resources, then I promise you can work to make your goals a reality – without the tools you think you need.

I’m not going to say stop comparing yourself to others, because if I’m honest, I still do it and sometimes we just can’t help it. That said, you will never be the person you compare yourself to, and they will never be you. We are unique, moving through the world at different paces with different goals and priorities. It’s fine to look at what other people are doing, but at the end of the day, you’re the only one making decisions about your own life, so don’t get so wrapped up in watching others that you forget to think about yourself.

Sometimes we all need a helping hand, someone to guide us or bounce ideas with. Often when we’re looking for a ‘mentor’ we imagine this formal relationship with a teacher-like person, but actually, having someone who supports you can be much less official. Sometimes it’s worth asking yourself, do I already have one? If the answer is no, go out and find one; never be afraid of asking for help. If the answer is yes, then you’re one of the lucky ones. Make sure you let the person or people helping you know that you value them. The strongest relationships are ones which work on both sides.

When I suddenly found myself without a club, I thought I had lost my community. In reality, it was never that black and white. I was part of something much bigger than LCB; I was still a boxer, and there were plenty of people I could have reached out to if I had let myself. Being part of a group can be such a special feeling. I’ve grown up belonging to a close-knit Somali community, and through boxing, I’ve always loved having other fighters around me. Finding your community is as simple as knowing that there are other people out there who share your values and have similar goals. Even strangers can be part of the same community, and to me that’s the strongest reminder that we are never alone.

Be kind to yourself

Things might not have gone the way you hoped, but don’t let your goals slip away from you. It’s when you’re feeling the worst that you owe it to yourself to be the kindest. I used to really punish myself whenever something didn’t go to plan. As I grew older, I learned that I would get back on track much quicker if I accepted the situation and allowed myself to take the time I needed, before picking myself up and carrying on.

Not Without A Fight: Ten Steps To Becoming Your Own Champion by Ramla Ali is published by #Merky Books

More like this
David Beckham’s Controversial Qatar Deal Skyrocketed His Net Worth
By Catharina Cheung
Jessica Simpson On The Time She Was Pursued By A Backstreet Boy & An *NSYNC Member
By The Editors
Watch Jacinda Arden’s Devastatingly Honest Resignation Speech
By Sam Ramsden
Joey Essex Is Rumoured To Be Dating A 'Love Island' Favourite
By Sam Ramsden
Get The Very Best Of Bustle/UK
Sign up for Bustle UK's twice-weekly newsletter, featuring the latest must-watch TV, moving personal stories, and expert advice on the hottest viral buys.