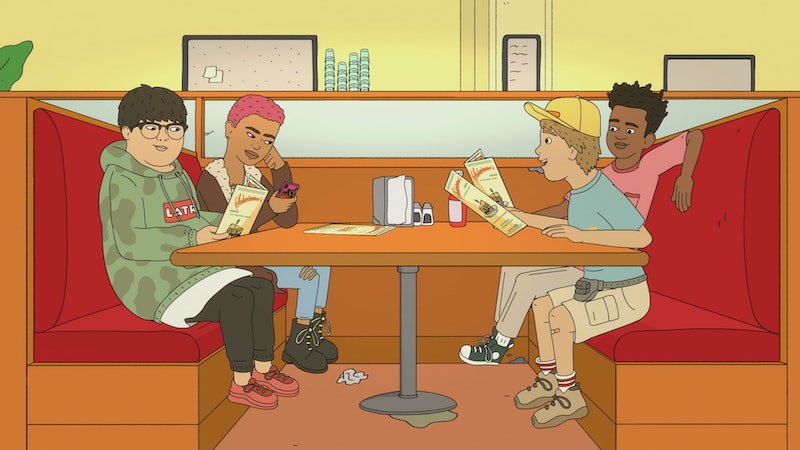 “This show is a love letter to kids today — the generation that will most definitely save the world from global warming, if they don’t die from eating Tide Pods first,” Fairfax creators Matt Hausfater, Aaron Buchsbaum, and Teddy Rileys said of Fairfax in a statement, per The Hollywood Reporter. “It’s a modern look at the timeless struggle to be cooler than you are, to fit in while standing out, and what it feels like to wait in line for a pair of sneakers you’re never going to cop.”

Although Amazon has yet to release any details, a Fairfax Season 2 is definitely happening. When the series was picked up in January 2020, it was given a two-season order — meaning that another eight-episode season is on the way, likely in the not-too-distant future. Here’s everything we know so far.

It’s safe to assume that the four main voice actors in Fairfax — Gisondo, Clemons, Kim, and Young-White — will reprise their roles for Season 2. Guest stars in Fairfax Season 1 included actors such as Rob Delaney, JB Smoove, Yvette Nicole Brown, Ben Schwartz, Billy Porter, and John Leguizamo. There’s no word on if any of them will return for Season 2, but you can assumedly expect even more celebrity voice cameos.

Amazon has not announced a premiere date for Season 2. Considering that there has been only one season of the show, there’s no established release schedule, making it hard to predict when a second season might air. However, the two-season order would have given the team a head start on production.

A trailer for Season 2 has also not yet been released, but this post will be updated as more information becomes available.

More like this
'The Rings Of Power' Episode 5 May See The Realms Brought Together
By Kadin Burnett
'Elite' Season 6 Is Arriving Sooner Than You Think
By Gretchen Smail and Grace Wehniainen
The ‘You’ Season 4 First Look Shows Joe’s New Identity And Potential Victims
By Bustle Editors
The ‘Emily In Paris’ Season 3 Release Date Is Here, Plus The First Footage
By Bustle Staff
Get Even More From Bustle — Sign Up For The Newsletter