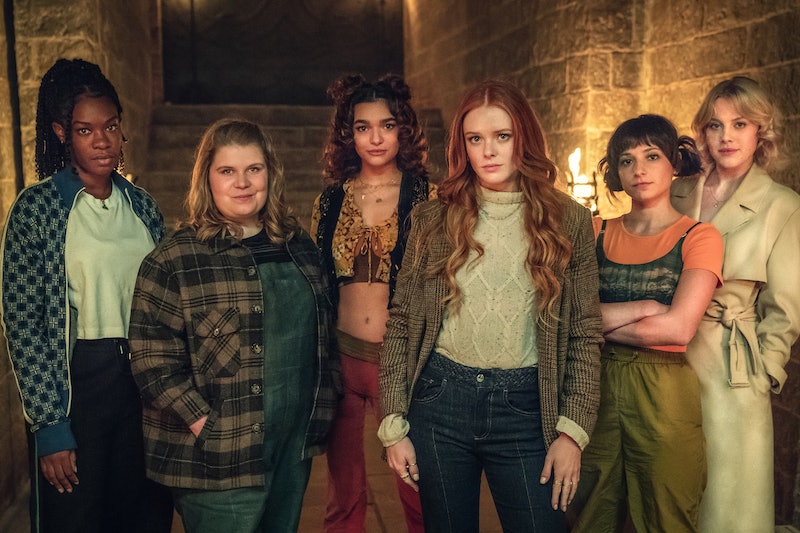 Netflix’s Fate: The Winx Saga is a fantastical coming-of-age story that centers on six fairies who attend a magical Otherworld boarding school called Alfea. Over the course of their quest to master their powers, the young women must also navigate love and rivalries, while taking on some menacing mythical monsters. Premiering on Sept. 16, Season 2 upped the stakes, and, though Netflix has yet to renew the series, a finale cliffhanger involving Bloom (Abigail Cowen) will surely have fans ready for a potential Fate: The Winx Saga Season 3.

Based on Rainbow and Nickelodeon’s animated series The Winx Club — which ran for eight seasons and spawned various spinoffs — Netflix’s live-action reimagining puts a darker, more grown-up spin on the children's show. Season 2 introduced new magic, new romance, and some new faces, as the students returned to Alfea, but things quickly went awry when fairies started to go missing in the night. So, it was ultimately up to Bloom and her suitemates to put a stop to the dangerous threat before it destroys the Otherworld.

While the first season largely focused on Bloom, Season 2 provided new opportunities for writer Vanessa Benton. “In Season 2, we got excited to kind of expand on all these characters. Because growing up, everyone that I knew had their own character that’s like, ‘I was so-and-so!’ and ‘I’m, you know, so-and-so,’” Benton explained to Screen Rant in August. “And so it was kind of important for us to give people like that a chance to have their moments with their character. So just bringing in more of the original source material and background for each girl and trying to bring that out more in Season 2.”

It remains to be seen if that strategy will continue into another installment, but here’s everything we know about a potential Fate: The Winx Saga Season 3 in the meantime.

Major spoilers ahead for the Fate: The Winx Saga Season 2 finale. Netflix’s description of the season’s seventh and final episode teased that it would be up to the Alfea students to protect their school and friends against the Blood Witches. Meanwhile, Bloom was faced with a “painful choice” that was revealed by the finale’s end.

Though viewers were left pondering several loose ends, Bloom’s decision to travel into the Realm of Darkness was perhaps the most consequential. In one of Season 2’s final scenes, she explained to Sky that the only way to close the portal that Sebastian opened was “on the other side,” warning that the Otherworld was “at risk” every second it was open. Deciding that she was a danger to her loved ones, Bloom said that neither she nor the Dragon Flame belonged there anymore.

“This whole year I’ve been trying to figure out what I’m supposed to do with this power inside me, and now I know,” she told Sky of her plan to “save the Otherworld” while saying an emotional goodbye. “You mean more than anything in the world to me. But this is bigger than us.”

After saying “I love you” to each other and sharing a goodbye kiss, Bloom disappeared through the portal, only leaving behind letters to explain to her friends where she had gone. Though she didn’t know exactly what dangers awaited her on the other side, she certainly stumbled upon a new mystery. Once in the Realm of Darkness, she came upon a woman standing by a fire. In the final line of the season, Bloom said, “Mom?” just before the screen faded to black and the credits rolled. Season 3 will likely reveal who the woman is, especially if it is Bloom’s mom, should the show get renewed.

After Season 1 premiered in January 2021, the second season didn’t drop until nearly two years later. Meanwhile, according to one of Cowen’s Instagram posts, filming for Season 2 wrapped in November 2021, ahead of a September 2022 premiere. Given that there seems to be about a year gap between the wrap and premiere dates, a third season could premiere in late 2023, pending a quick renewal and production start date.

This post will be updated as more Fate: The Winx Saga Season 3 details become available.