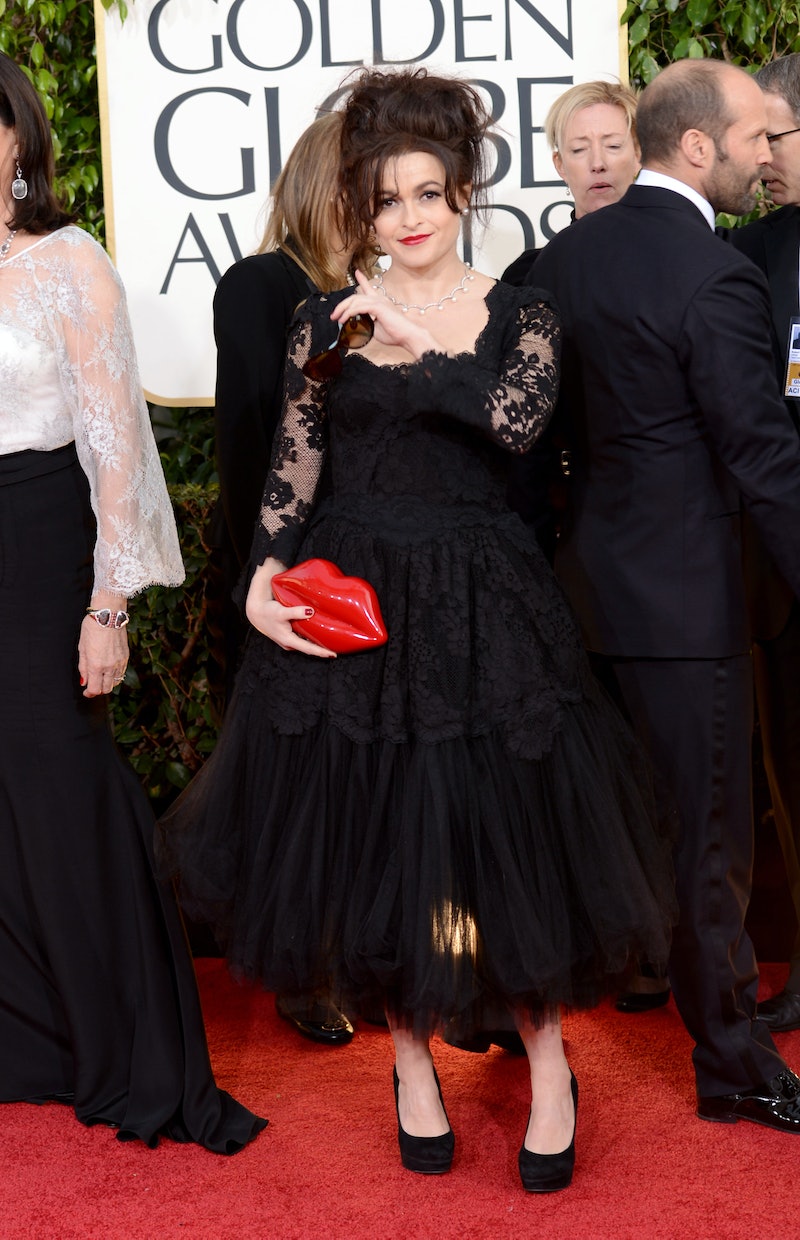 Here's one thing I've come to appreciate in recent times: getting dressed up to stay at home. On Thursday Nov. 12, Netflix UK invited the cast of The Crown season 4 to do just that, with an at-home red carpet premiere. Because, as they say, "If one cannot go to a premiere, the premiere must go to one (?)". Helena Bonham Carter, Gillian Anderson, Olivia Colman and more took part in the somewhat unusual virtual event, and quite frankly there was so much going on that we need to talk about it.

Season four of the hit royal drama begins on Sunday (Nov. 15), and it's set to detail the pretty scandalous era from the 1970s to the 1990s. Between Gillian Anderson's already epic portrayal of Margaret Thatcher, and the very convincing young Prince Charles and Princess Diana, we're close to losing our crowns in anticipation.

Ahead of the official release date, the cast dusted off some serious outfits, and quite literally rolled out a red carpet in their living rooms to celebrate the exciting new season. Nothing says 2020 quite like an event over Zoom and yet, like any red carpet, all eyes were still on the fashion choices. See Netflix's Twitter for some of our favourites.

The question we often ask on occasions such as this is, can Helena Bonham Carter out-do Helena Bonham Carter in the style-stakes? The queen of red carpet drama didn't disappoint, in a black lace Dolce & Gabbana dress – which she previously wore on the 2013 Golden Globes red carpet – platform heels, and, naturally, a crown. And what says "I got dressed upstairs" more than rollers in your hair? She was escorted by her two adorable dogs, too.

Meanwhile, Emma Corrin, who makes her debut in The Crown this season as Princess Diana, fully committed to the cause in top-to-toe tartan Miu Miu. If you're thinking, "Harry Styles could probably pull that look off, too", you're onto something, as both Corrin and Styles share the same stylist, Harry Lambert. I'd love to be a fly on the wall in those fittings...

In her own front room, Olivia Colman (or rather, HRH) wore a classic Paul Smith tuxedo, looking a world away from her character, Queen Elizabeth. As one The Crown fan tweeted: "From the red carpet to the couch, perfection."

Elsewhere, Josh O' Connor, who plays Prince Charles, looked mighty dapper wearing a smart-casual suit trouser and roll-neck combo by Loewe. Giving his best smize down the camera lens, the actor seemed to be channeling his inner runway model. As one Twitter commenter noted: "I do love how Josh O'Connor always looks like he's going full Blue Steel on a runway." I mean, if you've got it, flaunt it...

Gillian Anderson – impossibly chic in Dior – was accompanied by her partner and The Crown creator Peter Morgan. While Emerald Fennel, who plays Camilla Parker-Bowles, also showed up in fine form for the premiere.

Did it make us more excited for the new The Crown season? Absolutely. Will we be thankful for the return of real live events in the future? Most definitely.