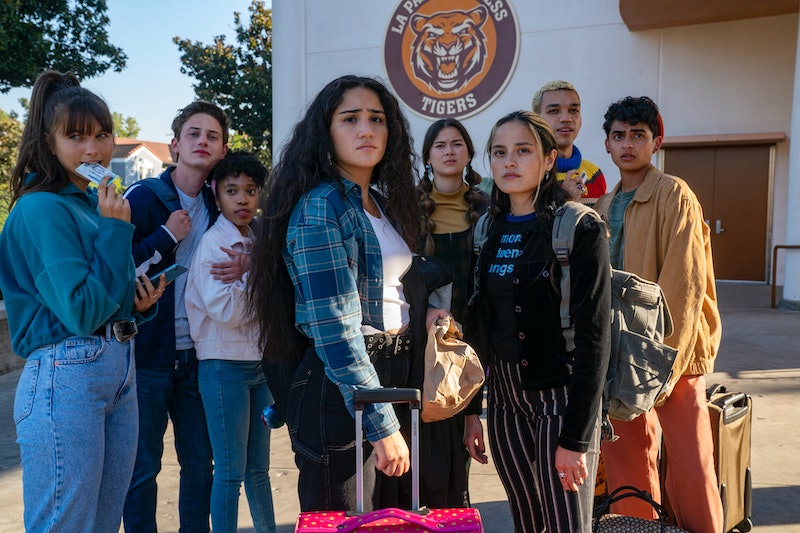 Whether campaigning to “Free the Nipple” on Grand Army or exploring substance misuse on Euphoria, even the most zeitgeisty teen shows all have one thing in common: they’re written by adults remolding their own adolescent experiences into stories they think will appeal to the current generation. But HBO Max’s new drama Genera+ion removes that guessing game entirely: it’s written by an actual teen.

Created by 19-year-old Zelda Barnz alongside her fathers Daniel and Ben Barnz, the show follows a group of Southern California high schoolers as they explore their identities while juggling the paradoxical need to both fit in and stand out. It’s in the vein of edgy teen hits like Élite and Skins, with less frenetic partying and more accidentally liking the Instagram post of your unrequited crush.

The title of the series is a stylized reference to the + in LGBTQ+, and the characters — charismatic misfit Chester (Justice Smith), photographer Riley (Chase Sui Wonders), shy Greta (Haley Sanchez), rich Nathan (Uly Schlesinger), activist Delilah (Lukita Maxwell), and brash Arianna (Nathanya Alexander) — all converge and clash at their school’s Gender and Sexuality Alliance (GSA) club. It’s a premise drawn from Zelda’s own experiences, as she joined her school’s GSA after coming out as bisexual at 15 in a humorous letter to her dads. Upon hearing the poignant stories Zelda shared about the club’s members, Ben and Daniel – a film producer and writer-director, respectively – encouraged her to create a TV show about the wide array of people she met there.

The resulting series is an equal collaboration between Zelda and Daniel. He lent writing experience (including work on the films Beastly and Phoebe in Wonderland), while Zelda provided “a wonderfully honest and authentic view into what it is to be a teenager right now,” Daniel tells Bustle. Ben served as an executive producer.

For Zelda, it was especially important that Genera+ion’s characters felt like three-dimensional people. “A lot of our characters are gay, but they also have a thousand other things going on, and their narratives aren't just defined by their sexuality,” she says.

Greta, an awkward Latinx student, pines after Riley while ignoring her fracturing relationship with her deported mother. Chester wears crop tops and brags about being “like, a lot,” but school counselor Sam (Nathan Stewart-Jarrett) wonders if Chester is masking his depression with theatrics. And Nathan longs to be as confident and free as Chester while trying to embrace his bisexuality, even when his self-absorbed mom (Martha Plimpton) and twin sister Naomi (Chloe East) react poorly to him coming out.

It was the latter point that Zelda was most keen to explore, particularly because of how regularly bisexuality is misunderstood. “Female bisexuality often tends to be fetishized, and male bisexuality is very rarely represented on-screen,” Zelda says. (In one notable scene, an adult wonders if Nathan is simply claiming to be bisexual because he doesn’t want to admit yet that he’s gay). “These characters aren't going through a phase. They aren't just having threesomes. This is who they love and how they love, and that's going to be part of their identity forever.”

For Daniel and Ben, working alongside their daughter was an eye-opening experience. “One thing that I think is so interesting about Zelda and her generation is that there is both a desire to be identified accurately and correctly, but also a desire not to be labeled at all,” Daniel says. Nathan coming out as bisexual “is a very empowering thing” for him, while his best friend Riley is uncomfortable with the idea of being labeled whatsoever.

That may feel contradictory, but the point of Genera+ion is that everyone engages with their queerness differently — even across the generational divide. “One of the things that was really interesting to us was watching how our kids came out, and how different it was for them versus us,” Daniel says. “For our generation, so often coming out was surrounded with a lot of pain and angst.” Coming out can still be enormously difficult, but through Zelda’s stories, he’s learned it’s a “much more joyous and natural and organic” process for some young people today. It’s these varied experiences that he and Zelda aimed to capture. “If there are teens who watch this show and see people who look like them and love like them, I will feel like it’s a success.”