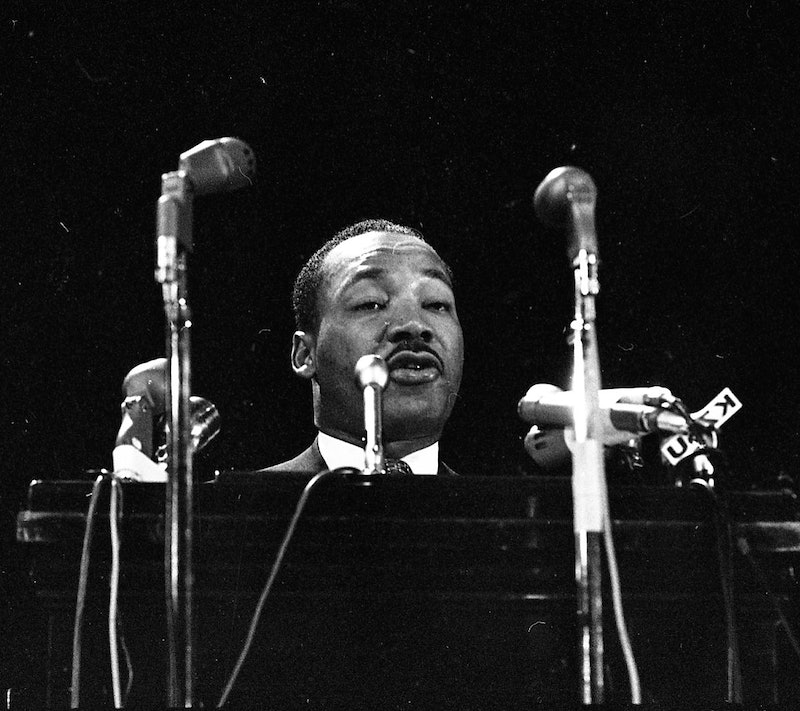 The National Geographic show Genius is coming to Disney+ for Season 4, giving a new audience the chance to learn about some of our most prominent historical figures. Deadline reported the network change-up in December 2020, which is also when the theme of the new season was announced. Following in the footsteps of series about Albert Einstein, Pablo Picasso, and Aretha Franklin, the fourth season will be dedicated to the genius of Martin Luther King Jr.

Not much is known about the new season yet, as the Aretha Franklin episodes are only just now wrapping up. King was actually briefly included in the Franklin season, played by Bloodline actor Ethan Henry. It’s unknown if the role will be recast for the King-focused series.

When the fourth season was first announced, several people expressed concern on social media that King’s legacy wouldn’t be handled properly by the two white executive producers Brian Grazer and Ron Howard. In the wake of learning that members of Aretha Franklin’s family don’t approve of her season, those concerns likely intensified.

According to the Los Angeles Times, Genius production obtained the endorsement of Franklin’s estate to work on the project, but her estate is reportedly not affiliated with Franklin’s immediate family. Per the Times, both Franklin’s son Kecalf Franklin and granddaughter Grace Franklin expressed frustration at not being included in the production of the show. “As the immediate family — emphasis on immediate — we do not support this film, and we ask that you also do not support this film, as ... we feel that there will be many inaccuracies about my grandmother’s life,” Grace said in a TikTok video posted ahead of the premiere.

In response, National Geographic told the Times, “Everyone who worked on Genius: Aretha approached telling her story with the intention to respect Ms. Franklin ... in every decision we made. The studio worked diligently to attain the endorsement of Aretha’s estate, which we are grateful to have. We worked with many people who knew Ms. Franklin — from Clive Davis to members of her family’s estate — to make sure we told her story in an honest and authentic way.”

In the past, new seasons of Genius have aired in the spring about a year apart, although there was a lengthy three-year gap between Seasons 2 and 3. That was due in part to a last-minute decision to document Franklin’s life after the writers had originally intended to tell Frankenstein author Mary Shelley’s story. As Courteney Monroe, president of National Geographic Global Television, explained at the Television Critics Association Summer Press Tour, “We were super excited about Mary Shelley. The fact is that we just couldn’t find a way to crack it creatively.” That’s when they change was made to explore Franklin’s story.

If the series plans to return to its regular schedule, Season 4 will likely be released in spring 2022. And since the show is now probably in the early stages of production, it’s imperative that those closest to King are asked to be involved. The series should also prioritize hiring a diverse writing staff and crew to ensure that it doesn’t, as many people on Twitter worried, whitewash King’s legacy.