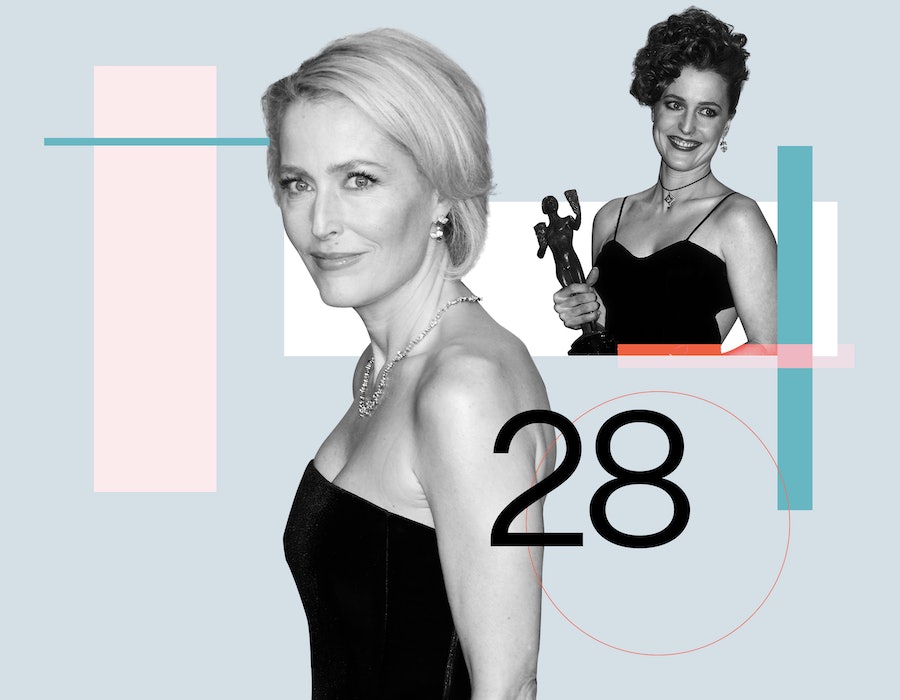 In Bustle’s Q&A series 28, successful women describe exactly what their lives looked like when they were 28 — what they wore, where they worked, what stressed them out most, and what, if anything, they would do differently. This time, The Crown star Gillian Anderson discusses how she managed parenting her 2-year-old daughter at the height of her X-Files popularity.

From the outside, it appeared that 28-year-old Gillian Anderson was living a charmed life in 1996. She was starring in the fourth season of The X-Files as FBI agent Dana Scully, a smart, no-nonsense career woman in a male-dominated field who was beloved by fans and on her way to becoming a pop-culture icon. A year later, Anderson would become the first actress to win an Emmy, a SAG award, and a Golden Globe in the same year for her work playing Scully on that season.

"On the one hand, I felt like I was having the time of my life," Anderson recalls. "But I remember being at the award shows and all the journalists kept saying, 'Smile! You don't look happy, why aren't you smiling?'" Between the long hours on set and parenting her 2-year-old daughter, Piper, she was worn down. "It seemed so unfathomable to me that I was winning all those awards. My focus most of the time was on just surviving."

Anderson, 52, would play Scully for the entirety of the show's run, including nine original seasons, two movies, and two rebooted seasons in 2016 and 2018. Her career since has been defined by myriad other iconic characters, from Lily Bart in House of Mirth to detective Stella Gibson in the BBC crime drama The Fall to the free-spirited sex therapist Jean Milburn in Netflix's Sex Education. Her latest role, playing former British Prime Minister Margaret Thatcher in Season 4 of Netflix's The Crown, already has critics praising her scene-stealing portrayal of the conservative figurehead. Below, Anderson reflects on The X-Files' whirlwind success, parenting in her trailer, and driving her daughter to school in the Porsche convertible she splurged on.

Take me back to 1996, when you were 28. How were you feeling about your life and career?

I had a 2-year-old daughter, so that was the biggest thing that was actually going on in my life. [We were] a couple seasons into The X-Files, a show that I don’t think any of us realized was going to have the impact that it did [end up having]. So I was living in Vancouver, we were shooting in Vancouver, that’s where my daughter Piper was born. [It was] crazy, crazy, crazy hours and just oodles of dialogue and not much of a life for a 28-year-old, but [I was] living the life of an in-work actress in a hit show and entirely immersed in both that and being a mom, and that was kind of it.

How did you manage having a very young child while working such long hours?

The thing about the situation was that at the time, because I was making money for the first time in my life, I was able to afford having a full-time live-in nanny, so I would not have been able to do it without her. My daughter basically grew up in my trailer. She had a very unconventional childhood. She would play at the lot of the studio or wherever we were on location and interact with the various prosthetic limbs [on set]. I’ve got Polaroids of her pushing severed heads in her pushchair and being eaten by a fake crocodile and being held by a 6-foot alien, and all that kind of stuff is part of her childhood. She sometimes didn't go home until at least 10 p.m., even though I shot until 3 a.m. — sometimes I stayed longer. I insisted on having her in my bed anyway [when I got home], because sometimes that was the only time I actually saw her even though we were sleeping.

[It was a] crazy, crazy, crazy way to be a mom, but at the same time it really focused my attention on being a mom when she was in front of me, and it really got me to focus on compartmentalizing. I learned how to completely focus when I was on set and completely focus when I was back in the trailer, and that degree of compartmentalizing has actually really helped me later in life.

What did a typical Friday night look like when you were 28?

I was on set, without a shadow of a doubt. I was working until sunrise on Saturday. I think when we first moved down to L.A., which would have been for the sixth season, we had more days off than in the entire first five seasons because they split up the filming.

It wasn't until the show was over many years later that I went, "Wow, that was really cool. That was a really cool character; I was really lucky."

What was the biggest thing you splurged on?

What happened to it? Did you sell it?

That’s a very good point; I have no idea what happened to it. I must have sold it, but I don’t remember that.

Are you into cars?

I’ve always been quite a fan of cars and I particularly liked driving fast. I did some sessions up in the hills and along the mountain roads and stuff with somebody teaching me how to handle the car better, and I did some kind of Porsche racing thing at some point for Porsche magazine.

Dana Scully has become such an icon, particularly for young women. What did it feel like to embody a character that meant so much to so many people?

At the time it was really, really hard for me to take in. I started to get fan letters of people saying amazing things like, "You saved my life," or, "I had cancer and I watched the show in the hospital." It’s almost impossible to hold on to. Because what do you do with all that information as a 28-year-old? Without needing to somehow separate yourself from it and put that person over there so that you can get on with your life without your head growing too big. So that’s what I kind of did, and it wasn’t until the show was over many years later that I went, "Wow, that was really cool. That was a really cool character; I was really lucky."

What was your biggest challenge at 28?

Honestly, staying sane. I was pregnant with my daughter the first time I started to have panic attacks. There was a good year where I had daily full-on, quite severe [ones]. On the one hand, I’m grateful for them in retrospect because I feel like they really helped to humble me. It was such a horrendous experience trying to show up to work having them [that] I was so grateful when I didn’t have one. [I was] trying to take care of myself, trying to be a relatively decent, present parent as much as I could, and still do my responsibilities for the show — both showing up for [shooting and] doing the press that was required without, you know, starting to use drugs or any of the coping mechanisms that one grabs onto when you’re under a great deal of stress.

Was there ever a moment you felt like you made it?

I don’t know if I [had one], and I slightly wish that I had allowed myself to feel that during the show. I think part of it was I had a similar thing to what [X-Files co-star] David [Duchovny] had — David felt like he was never meant to do television. And I... one, I was incredibly grateful, both because I’d never seen the kind of money even my first paycheck was — which was not that much, but compared to how I grew up it was a lot. But at the same time, I had wanted to do theater, I wanted to do Shakespeare, I wanted to do a different kind of work. I did slightly begrudge [The X-Files] at the same time as being grateful for it. So I don’t think that my feeling of "having landed" happened until I did House of Mirth because I felt like that was doing the kind of thing that I had dreamed about doing, whereas the show wasn’t that yet, even though I would come to learn that was the thing.

The mixture of all of that, from feeling like I was a serious actress, but I’m a mom, but I’m exhausted, and all the things that were going on in my head was overwhelming me. It was quite hard to appreciate it when I was actually there in the moment.

More like this
At 28, Sharon Horgan Was Hoping To See Damon Albarn At The Pub
By Samantha Rollins
A New 'And Just Like That' Table Read Pic Confirms A Key Character's Return
By Jack Irvin and Grace Wehniainen
You’ll Definitely Recognise Both Of Ty Tennant’s Parents
By Maxine Harrison
'House Of The Dragon’s Theo Nate Is A “Massive” 'GoT' Fan
By Maxine Harrison
Get Even More From Bustle — Sign Up For The Newsletter