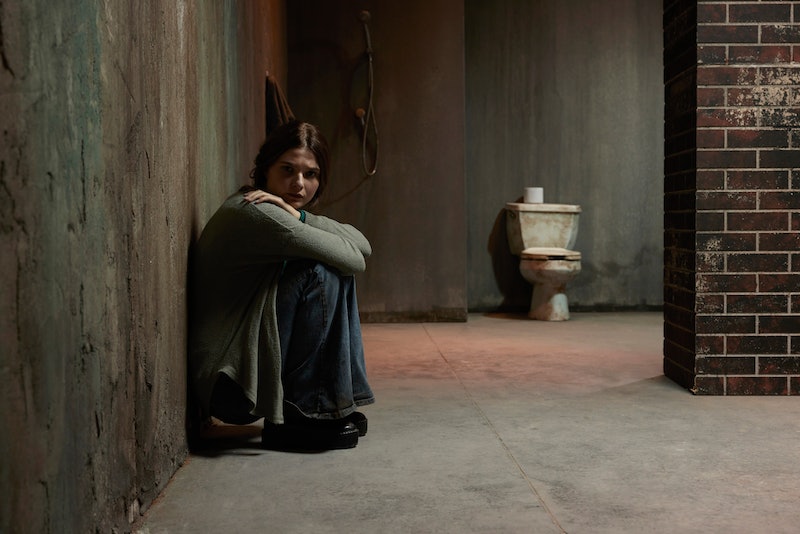 As part of Lifetime's latest "Ripped from the Headlines" series, Girl in the Basement makes its network debut on Feb. 27. And although its unsettling plot may be hard to believe, the movie is inspired by true events.

It stars Stefanie Scott as Sara, a teenager who anticipates moving away from her controlling father, Don (Judd Nelson), on her 18th birthday, but she doesn't make it. Instead, he coaxes and traps her in the family basement, where over the next 20-plus years, he tortures her, rapes her, and fathers her children — all while Sara's mom and sister live in ignorance upstairs, believing Sara ran away. Eventually, Don delivers one of the babies to his front doorstep with a fake note from Sara asking the family care for it because she can't. After decades of captivity, Sara escapes and her family learns her devastating truth.

According to the film's director, Elizabeth Rohm, Girl in the Basement is based on "several stories that deal with sexual assault, imprisonment, and incest," but there is "one very similar story." That's the case of Elizabeth Fritz, whose father, Josef, trapped her in their cellar in Austria in 1984 and carried out those same despicable acts over 25 years, leaving her with seven children (three of whom were taken upstairs to live "normal" lives) as well as severe psychological and physical damage, per the Guardian. "It's the story of a monster, truly," Joely Fisher, who plays Sara's mom, Irene, told local news network KTLA5. "And I think the only way we defeat monsters in the world is to tell their stories."

Rohm told New York Live TV that Girl in the Basement and the other series films are part of Lifetime's efforts to draw attention to the Rape, Abuse & Incest National Network (RAINN), the nation's largest anti-sexual violence organization. It's important to her that the project is more than just a movie, "but a movement," and she encourages premiere viewers to "hang in there" and watch the subsequent documentary titled Beyond the Headlines: Surviving Child Abduction and Imprisonment. Other 2021 "Ripped from the Headlines" films include Circle of Deception, A House on Fire, and The Long Island Serial Killer: A Mother's Hunt for Justice.

More like this
Lori Vallow’s Son Was Arrested For Sexual Assault Days Before 'Sins Of Our Mother' Premiered
By Brad Witter
Glenda Cleveland Died 2 Decades After Trying To Turn In Neighbor Jeffery Dahmer
By Brad Witter
Alleged Cult Leader Larry Ray Is Awaiting Sentencing Following His Conviction
By Brad Witter
Where Is The Bling Ring’s Rachel Lee Now?
By Arya Roshanian
Get Even More From Bustle — Sign Up For The Newsletter