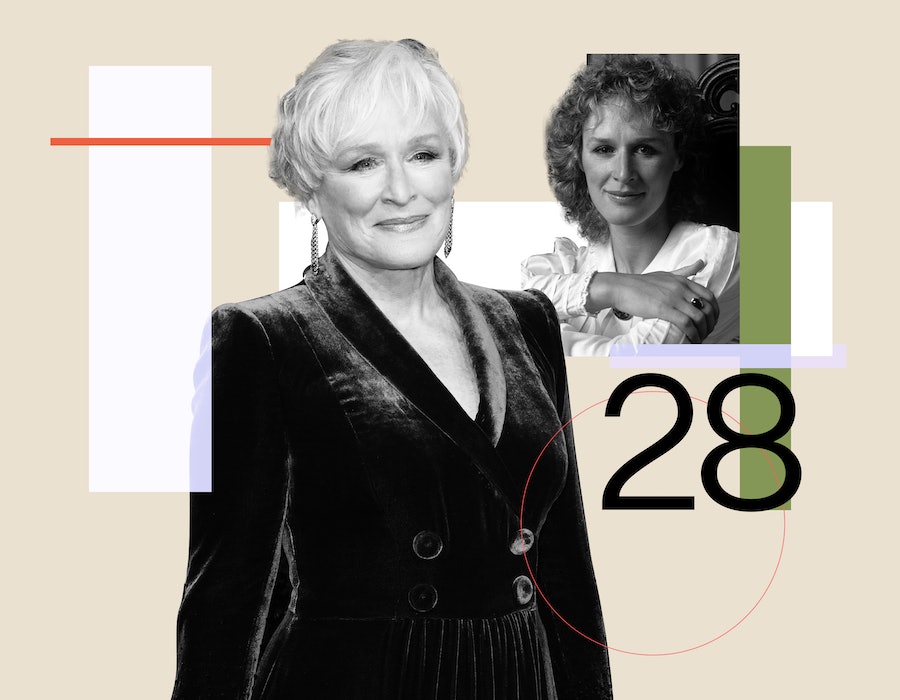 In Bustle’s Q&A series 28, successful women describe exactly what their lives looked like when they were 28 — what they wore, where they worked, what stressed them out most, and what, if anything, they would do differently. This time, Hillbilly Elegy star Glenn Close discusses how she launched her career on Broadway in 1975.

How do you begin to introduce Glenn Close, 40-year veteran of stage and screen? You can rattle off her many iconic roles, like the bunny-boiling mistress in Fatal Attraction, Cruella de Vil in 101 Dalmatians, and Patty Hewes in Damages. Or you can plug her most recent part in Hillbilly Elegy, Netflix’s adaptation of J.D. Vance's bestselling memoir, in which she plays the author’s chain-smoking, tough-loving grandmother. Or you can just start at the beginning. Because, actually, she has a pretty great story to tell.

It goes like this: Close was 27 when she landed her first job as a working actor, playing understudy to the leads in three Broadway plays. The first of those plays, Love for Love, was just about to open when the director, the legendary Hal Prince, pulled Close aside to ask if she’d be ready to go on that night — he was planning to fire the leading lady, Mary Ure, after the matinee performance.

“He had never even seen me read or anything,” Close tells Bustle. But she didn’t so much as hesitate. “I actually got very calm and said, ‘Yes,’” she recalls. “Without ever having rehearsed. And for some crazy chance of luck, I had learned all the lines, which I still kind of marvel at.”

When the run of that play ended, Close returned to her little fourth-floor dressing room and humbly resumed her work as an understudy. “It was a rather profound lesson to begin [my career with],” she says. Below, she reflects on the hustle that followed, her years spent fumbling auditions, and becoming an internet darling in her 70s.

You were thrust into a starring role shortly after graduating from the College of William & Mary. But then you had to go right back to being an understudy. Do you remember how you were feeling about your career by the time you were 28?

You know what? I was doing what I wanted to do, and when you start out, all you want is a good job. You want to be able to work. Everyone was pounding the pavement and going to auditions, and I can remember the absolute elation of getting work and doing what I really loved to do. I didn’t think about being a star. I just thought that I wanted to be an actor. And I was with a wonderful generation of actors at the time: John Lithgow and Mary Beth Hurt and Kevin Kline and Patti LuPone and Meryl Streep and JoBeth Williams and Sigourney Weaver — and all of us started in theater in New York. So it was a very exciting time.

Where did you all hang out?

There were all these wonderful actor restaurants that don’t really exist anymore. I remember seeing Anthony Hopkins, who came into town and was in an extraordinary Peter Shaffer play, Equus, just sitting [in one]. He’s the only person I ever went up to to talk about his performance — because, you know, you leave people alone.

What did you say to him?

I just told him how extraordinary he was and how inspired I was by his performance. Something like that.

And did he accept the compliment?

Oh, yes, I think he did; very graciously, as he would.

So it sounds like you liked being in New York City.

Oh my god, are you kidding? It was amazing.

Did you so much as experiment with the Downtown scene?

No! I was a Connecticut girl. Oh, I wish I had. But I was working a lot. You don’t really have time. You work and then you go home, because you do eight performances a week. I was learning the discipline of being a stage actor. And I’m not a party person. I never have been. Even in college I wasn’t. I’m more of an introvert. But I made wonderful friends who have stayed friends my entire career.

You met Mary Beth Hurt, who is your best friend to this day, around this time. What sort of things did you two get up to at 28?

She was this gamine. She was so gifted, so original, and she would get all these men around her. And I was just kind of the sidekick. I remember one time we were in an actor bar, and I think a famous tennis player came up and she literally said, “Shoo! Shoo! Go away.” She’s very funny, very smart, and I always felt a little like I didn’t quite measure up. Because I didn’t think I could be that kind of witty-funny. But I remember deciding that I’d much rather have Mary Beth as my friend than to try to be the wit of the party. And we’ve had this extraordinary friendship our whole careers.

My first apartment was in Hell’s Kitchen. It was a walk-up apartment in a building with really narrow hallways, and the bathtub was in the closet. And I had one of those little electric oven things. That’s all I had to make food. You had to keep your wits about you. New York was pretty rough around the edges at the time. I always had a little dog with me, so that was helpful.

You had a dog and did eight shows a week?

Yeah, my dog would just go to the theater with me. Although my dog, Penny, she went through college and to New York with me, and she was really unhappy when I wasn’t home, and when I heard that she howled when I wasn’t home, I realized that it wasn’t a good life for her. And there came a time where I asked my parents, who lived in Wyoming, whether they would take Penny. I shipped her to them just sobbing. But she ended up having a very good life. And whenever I came [to visit], she would sleep with me. She never forgot. But that’s the only dog I ever had to do that with.

Were you auditioning for movies at 28? Because you didn’t actually star in your first movie, The World According to Garp, until your 30s.

Did you ever feel like you were behind, since you started college at 22?

I did. I wish I could have started [sooner]. I wanted to be in Disney movies when I was 7 years old, but life just didn’t take me in that direction. I never was an ingenue.

Were you good at auditioning?

No. I was terrible at auditioning. I just didn’t have the knack. With Albert Nobbs, which I initially did off-Broadway, I started the audition, and then I stopped and I said, “I am boring myself to tears, so I must be boring you. So excuse me, but I’m just going to go home.” And my agent got the call saying that it was the most interesting thing that had happened to them all day and they wanted me to come back.

So then I called Kevin Kline and I said, “Who is that coach that you go to that you love so much?” Harold Guskin. And I went to Harold and I said, “I want this part and I need your help,” and he helped me and I got the part. And the rest is history.

From then on, your auditions got better?

As I got better, my auditions got better. Then there comes a point where you really don’t have to audition anymore, but then you want to sometimes because people can’t imagine you doing something. I mean, it took me 14 years to do [the film adaptation of] Albert Nobbs — not consistently, because I would get jobs in between, but I would pitch it. And I was good at pitching, but then they just couldn’t imagine it, you know? And I think that a lot of us feel that frustration. You just say, “Well, give me a chance and you’ll see what I mean.”

Jumping to the present moment: I feel like you’re having more fun than ever with your public image. The internet loves you.

That to me is amazing. I can barely figure out how to post [on Instagram]. I mean, I can’t do all the fancy things that people do; I don’t know where everybody gets the things that they post. Somebody has to teach me how to do all that. It’s just me and Pippy, [my dog].

I have a kind of brain where I can have laser focus, but I’m not a multi-tasker. So my brain feels like it’s going to blow up really easily. So if I spend too much time on social media I get really jangled. So I probably wouldn’t have gone on it when I was 28. But then again, it would be a different world. My daughter, Annie [Starke, who is also an actor], is so adept at how she uses the internet and all that, but I will never be like that. Because I have to almost protect myself against what it would do to my brain.

Introverts are introverts even on the internet. It can deplete you quickly.

Yeah. I went for quite a while where I didn’t do anything, and then I just started up again. I feel that if I do anything, it just really has to be me. I don’t want anybody doing it for me. But now I think there’s great pressure for people, certainly in their 20s going into their 30s, in my profession to have to be influencers, to have millions of followers, and I think people take that into consideration when they’re casting, which is unfortunate. Because I don’t think that should be taken into consideration.

When you were 28, the stage was where you got noticed; you never knew when agents might be coming to your shows. Do you remember feeling those eyes on you?

Well, yeah. It was from Barnum that I was cast in The World According to Garp. And I had just opened in another play, I think it might have been The Real Thing with Jeremy Irons, when I was offered the movie Witness. I think Harrison Ford was in it with that actress that had been with Tom Cruise, [Kelly McGillis, who went on to star in Top Gun], and that was such a beautiful script, and if I had been able to do that movie, it probably would have moved my career ahead in the movies. But I couldn’t leave the show. I was contracted for six months.

Did that bother you?

Katharine Hepburn in her one TV interview with Dick Cavett says, [doing an impression of Hepburn] “No regrets.” You could just tie yourself in knots if you think, “What if? What if? What if?” You just have to say, “Here I am now. I own my choices. I don’t know what’s going to happen, but I know it’s going to be interesting and fun.”