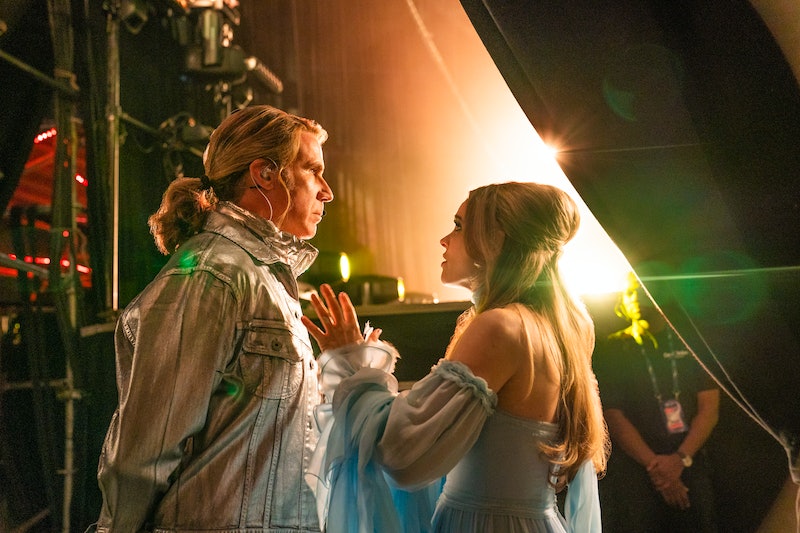 Over the last two years, many people connected with their families — who, in some cases, doubled as new roomies — with the help of movies on Netflix. They brought joy, laughter, and, sometimes, seriously uncomfortable moments in the form of surprise sex scenes or not-so-family-friendly themes. That’s just the way it goes with the array of entertainment options at our fingertips, of course: not every film on your to-watch list is guaranteed to work for your entire household, from impressionable kids to older relatives and grandparents.

But fortunately, there are still plenty of options if you’re looking for Netflix movies that are sure to please everyone in the fam — because there’s nothing like the simple pleasure of catching a movie at home with loved ones by your side. (Plus, even if you’re not gathering in person, apps like Netflix Party have you covered with virtual viewing rooms.)

To save you from spending half the night scrolling through options to watch, here are some of the best movies for grandma and the whole family on the streaming service — from classic films to modern musical gems that are sure to leave the whole house feeling warm, fuzzy, and connected.

Love this list? Create a Likewise account to save these recs to your own watchlist and follow Bustle for more. You'll always know exactly what to watch next.

Will Ferrell and Rachel McAdams star in this ultra-charming musical comedy about a pair of small-town Icelandic performers who hope to win big on the global stage. Its sweet messages about family and pursuing your dreams are sure to stick with you — as will all the amazing songs, one of which (“Husavik,” named for the Icelandic town that the characters hail from) was nominated for an Academy Award in 2021.

Elijah’s (Mamoudou Athie) family runs a Memphis barbecue restaurant, one his dad wants him to inherit one day — but he has dreams of becoming a sommelier instead. It’s a classic parent-child conflict that all viewers can empathize with, and the passion each generation has for its respective craft is palpable. It’s especially clear when it comes to all those mouthwatering food scenes (warning: you will be hungry), or when Elijah deftly explains different kinds of wines by comparing them to popular rappers.

A Hawaiian family who happily calls New York “home” reluctantly heads to O’ahu for what turns out to be a seriously transformative summer. What follows (perhaps to the characters’ surprise) is a charming story that will win over the whole family, from younger kids who love the onscreen adventure and mystery elements to parents who appreciate the themes of heritage and home.

Yes Day follows one family’s experiment with saying “yes” to all of their kids’ requests for one day — which, as you might expect, results in mischief and some sweet moments, too. Jennifer Garner, who stars and produces, told People that she began the tradition of “yes days” in her own family after reading Amy Krouse Rosenthal’s book on which the 2021 movie is based.

5. The Mitchells Vs. The Machines

Family road trips are often pretty tricky, but the Mitchells’ goes especially awry when AI-controlled robots take over the world. As they fight the tech takeover, the quirky family comes together in this sweet animated adventure, which was written by the same team behind Spider-Man: Into the Spider-Verse. The star-studded cast includes Olivia Colman, Maya Rudolph, Abbi Jacobson, and more.

This whimsical Christmas film may not have gone on to win the Oscar — but it did win over families who found comfort in its feel-good story of a postman, Jesper, who finds purpose and friendship delivering toys on behalf of the mysterious Klaus. Even though it’s a holiday movie, Klaus is the kind that wins over the family any time of year.

Another critically acclaimed holiday film (because really, you don’t have to wait for December), Jingle Jangle revolves around a young girl, Journey (Madalen Mills), who revitalizes her toy-making family’s love for the work — and each other — through a musical quest. There’s an amazing soundtrack (penned with the help of John Legend) and sentient toys, too. What more could you need?

8. David Attenborough: A Life On Our Planet

The beloved broadcaster David Attenborough guides viewers on a reflective view of Earth and its uncertain future in this sweeping nature documentary. There’s both fear and hope to be found in the diverse ecosystems Attenborough observes, and the film features examples of eco-friendly steps in the right direction. The Netflix feature will win over kids and kids-at-heart who love wildlife and want to start taking a more active role in preserving the planet for future generations.

9. The Boy Who Harnessed The Wind

This story of a child’s ingenuity is sure to inspire the whole family — plus, it really happened. In this uplifting film, a young boy named William Kamkwamba develops a wind turbine that saves his Malawi village from economic ruin. The Boy Who Harnessed The Wind stars Maxwell Simba and Chiwetel Ejiofor, who also wrote and made his feature directorial debut with the movie.

Over the Moon is a musical journey of a young girl, Fei Fei, who tries to travel to the moon as she grieves her late mom and contemplates the prospect of her dad remarrying. It’s the kind of vibrant, musical journey that younger kids will love, while others will appreciate the themes of loss, family, and healing. Plus, several of your faves, including Hamilton’s Phillipa Soo and Grey’s Anatomy’s Sandra Oh, round out the cast.

A group of superheroes’ kids — including the daughter of Sharkboy and Lavagirl — team up to save their parents (and the world) in this playful Netflix original. Though this is by and large the next generation’s story, a few famous faces — such as Priyanka Chopra-Jonas and The Mandalorian’s Pedro Pascal — make it a truly crowd-pleasing pick for the whole family.

With the recent announcement of a Paddington 3 in the works, now is the perfect time to catch up on the Paddington Cinematic Universe. Start where it all began with this Stuart Little-esque tale of the displaced, marmalade-loving bear who finds a new home among a London family. Not without some trouble from a taxidermist (Nicole Kidman) with personal beef against bears like him, though.

If yours family doesn’t mind a group cry, Fatherhood might need to be next on your list. Kevin Hart stars as Matt, a new dad whose wife, Liz, died hours after giving birth to their daughter, Maddy. The film — based on the true story told in Matthew Logelin’s memoir, Two Kisses for Maddy — follows the father and daughter on their new family journey together.

2021 was a very busy year for Lin-Manuel Miranda — but between the Oscar-nominated swirl of Encanto and tick, tick... BOOM!, you may have missed this delightful Netflix original featuring songs from the Hamilton scribe. Miranda’s titular Vivo is a kinkajou set on transporting a song from his late owner to his long-lost love, Marta (played by Miami royalty Gloria Estefan).

This family adventure follows Stranger Things’ Millie Bobby Brown as Enola Holmes, younger sister to Sherlock (Henry Cavill) and Mycroft (Sam Claflin). On the search for her missing mother, Enola discovers her detective skills and defines herself as an integral part of the sleuthing family — a good thing for viewers because a sequel is already in the works.

Grant Gustin stars in this true story about a state trooper who adopts a shelter dog named Ruby, and trains her to work on the K-9 search and rescue team. The feel-good film will make you appreciate the bond between pup and pup parent even more — plus, for families who are wary of tragic endings, rest assured that Ruby is alive and well by the end of the movie.

Sports movies are a great option for family viewing. After all, rooting for the underdog is a cause every generation can get behind. The Main Event follows Leo (Seth Carr), a boy who stumbles upon a magical mask that turns him into a wrestling champion. As he learns along the way, though, the things he’s really fighting (like school bullies and family woes) may call for a different approach.

For families who love a classic rom-com, Hallmark-esque Netflix originals are sure to deliver the sweet vibes and familiar storylines you crave. Falling Inn Love might follow a tried-and-true pattern — a woman from the big city finds love and fulfillment in a new, down-to-earth locale (this time New Zealand) — but Christina Millian’s warm performance as Gabriela, and her chemistry with the new man from down under (Adam Demos’ Jake), makes the film a must-see.

If yours is a musical family, you will want to watch The Prom together — then promptly add its soundtrack to your Spotify rotation. The lively film is an adaptation from the popular Broadway musical and stars a variety of familiar actors from both stage (Hamilton’s Ariana DeBose and The Book of Mormon’s Andrew Rannells) and screen (Meryl Streep, Nicole Kidman, Kerry Washington, and more).

You may have heard some of the songs off this animated film’s soundtrack — both Rihanna and J.Lo star, so good music is a given — but have you sat down to watch it? If not, get the family together! This adorable adventure features Rihanna as Tip, a teenage girl who is trying to reunite with her mom amidst an alien invasion, and Jim Parsons as Oh, the outcast alien who accompanies her for the journey.

The original Benji from 1974 spawned an entire franchise of charming low-budget films about its lovable titular mutt, but the pooch had long ago faded from the zeitgeist. But now Benji is back, thanks to this 2018 Netflix reboot film. Although he may not be quite the same dog that you remember from five decades ago, he still knows how to put a smile on your face.

There’s a pretty good chance you (or your family) have already seen the Tom Hanks classic that is Forrest Gump. But if not — or if you simply crave a comforting rewatch — the Oscar winner is a must. The 1994 film follows the titular Forrest, a kind man from a small Southern town who goes on to inadvertently involve himself in some of the century’s biggest moments, rubbing shoulders with everyone from Elvis Presley to John F. Kennedy.

More like this
These 25 International Horror Movies On Netflix Prove Fear Is A Universal Language
By Bustle Editors
Netflix Reveals First Look At Wednesday In The 'Addams Family' Spinoff Series
By Bustle Editors
What’s New On Netflix: Ana De Armas’ 'Blonde' & A Nick Kroll Special
By Arya Roshanian
What’s New On Netflix: Meet 'The Real Bling Ring'
By Arya Roshanian
Get Even More From Bustle — Sign Up For The Newsletter

This article was originally published on Sep. 26, 2016