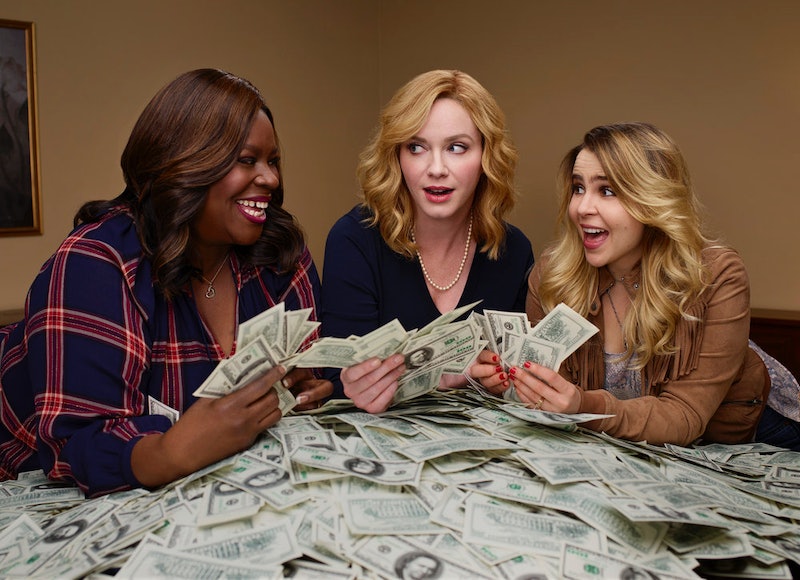 Thanks to the coronavirus pandemic, Good Girls Season 3 was cut five episodes short. But it still managed to pack a lot into the 11 episodes that did air, and anything that was left unresolved will be answered when Season 4 premieres March 7. Executive producer Bill Krebs told Bustle last year that he was excited to jump into Season 4, because the first few episodes have the action and twists that usually only come towards the end of a season. "We get to start Season 4 with a velocity that we don't normally have," he said.

Before diving back into the action, here's what you need to remember about Good Girls Season 3.

The Women Started Their Own Counterfeiting Business

Thinking that Rio was dead, Beth, Annie, and Ruby started their own counterfeiting business in the back of the stationary store where Beth was working. Ruby, who'd started a job as a manicurist, contributed nail polish to use as a chemical agent. And Annie was working as a valet to provide the dollar bills they would use as the paper. They also recruited Beth's coworker Lucy, a graphic design whiz, to help them make the money printing plates. Lucy agreed, because she believed they were making fake cash for a casino charity night.

However, Rio didn't actually die when Beth shot him. He survived and became an informant for Agent Turner until he was healed enough to plot Agent Turner's death. After killing the agent, Rio was free to track Beth down. He made it clear that he wanted her dead, so Beth panicked and said she was pregnant. The lie bought her some time before she eventually confessed to having "lost" the pregnancy. But Rio decided to keep her alive anyway, because he learned that she'd restarted the counterfeiting business. He wanted her to work for him.

Lucy Got Murdered & Her Boyfriend Was On The Case

To prove to Beth that she wasn't in control, Rio shot and killed Lucy. He didn't need her to run the business; he already had her printing plates. Rio also tricked Beth into touching the gun that killed Lucy, which could leave her on the hook for the murder. After Lucy's disappearance, her boyfriend Max began questioning Beth. She tried to trick Max into thinking Lucy had packed up and moved away, even taking her pet bird with her. Max seemed to accept this story until he spotted Beth's husband Dean with the bird. Max demanded to know the truth, so Beth told him about Rio and suggested that Max kill him in revenge. Max chickened out on that plan, but he did connect Beth to his cousin (a hitman) instead. As of the end of the season, Beth was still working with the hitman to get the job done, so Rio's days on the show may be numbered.

While Beth saved up the money to pay the hitman, Rio tasked Beth with picking up a "package" for him that turned out to be Annie's creepy former boss Boomer. He'd broken out of jail and was expecting to be transported to Canada, but Beth was instructed to deliver him to Rio. After she dropped him off, Beth tried to convince Rio not to kill Boomer. But Rio ominously said, "I got different plans for him." That's something Season 4 will need to explain.

Stan Got A Side Hustle, Too

While Ruby worked at the nail salon and on her counterfeiting, her husband Stan started his own side hustle. He start working as a security guard at a strip club, where he helped the dancers steal from their wealthy clients.

Annie went through a lot of character growth in Season 3. She started going to therapy and studying for her G.E.D. so she could become an EMT. However, she also started to fall for her therapist, who was similarly bad at drawing boundaries. He flirted with her and helped her study, but it was later revealed that he had a fiancée, leaving Annie sad and dejected.

Dean's boss at the hot tub store tried to force him to cheat on Beth, but he wanted to remain loyal to his wife. Beth and Dean then used the information as leverage to buy his boss out of the company. Now the couple plans to use the hot tubs sales to launder Beth's counterfeited cash.

The FBI Is Onto Them

Well, mostly onto Ruby. The FBI learned that she bought a car in all cash — a huge red flag when you're trying to fly under the radar. FBI Agent Phoebe Donnegan also figured out that the chemical used in the counterfeited cash was nail polish. Since Ruby worked at a nail salon, Phoebe was pretty sure she had her woman. Phoebe went to get her nails done at the salon and later tracked Ruby down at the park where she was hanging with Beth and Annie. Phoebe's game is to befriend them to gather evidence, and that's where Season 3 left off.