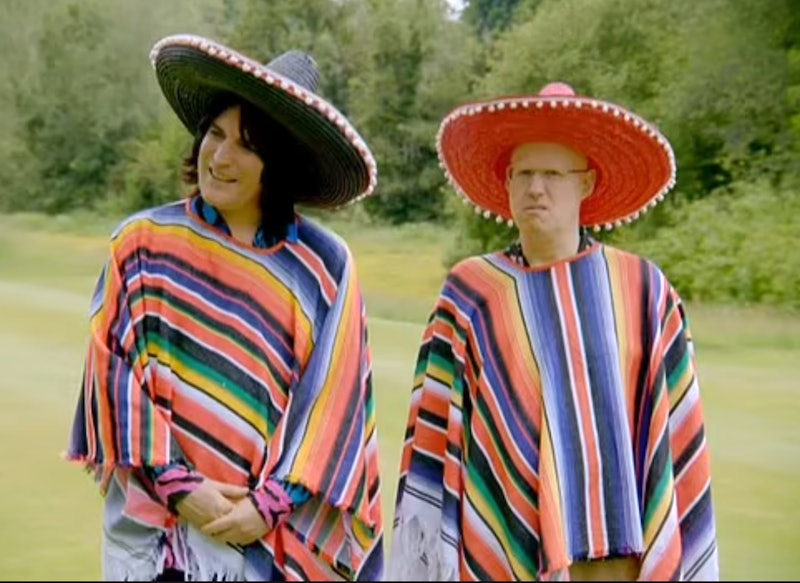 Ever since the show’s debut more than a decade ago, The Great British Bake Off has become known as one of TV’s more wholesome offerings, with the contestants' weekly challenges and culinary puns delighting viewers. However, following a recent “Mexican Week” episode of the Channel 4 competition, GBBO is facing a wave of social media backlash, with some viewers accusing Bake Off of perpetuating harmful stereotypes.

During the show’s Oct. 4 episode, judges Prue Leith and Paul Hollywood tasked this year’s aspiring bakers with recreating Mexican staples including tacos, pan dulce, and tres leches cake. Dressed in a sombrero and serape, Noel Fielding told his GBBO co-host, Matt Lucas, at the top of the episode, “I don't feel like we should make Mexican jokes, because people will get upset.” Lucas then replied, “What, not even Juan?”

Throughout the remainder of the show, the Bake Off hosts, judges, and contestants were shown making several Spanish mispronunciations, playing the maracas, making tequila references, and creating a “fiesta” cake featuring a moustache.

Following the broadcast of the episode in question, some fans were quick to voice their disapproval online. “I love Bake Off, but Mexican Week was a mistake. Tacky jokes about Mexican stereotypes and no attempt to properly pronounce the language,” one viewer wrote on Twitter, while another fan commented, “It’s 2022. I’m sure you can make jokes without relying on stereotypes.”

“White people’s exoticisation and trivialisation of Mexican culture enrages Mexicans and Mexican-Americans alike,” Garcia wrote. “Seeing Mexico as a fantastical place that exists only for the amusement and the consumption for the gringo [a person who isn’t Hispanic or Latino] has a long and problematic history.”

This article was originally published on Oct. 7, 2022