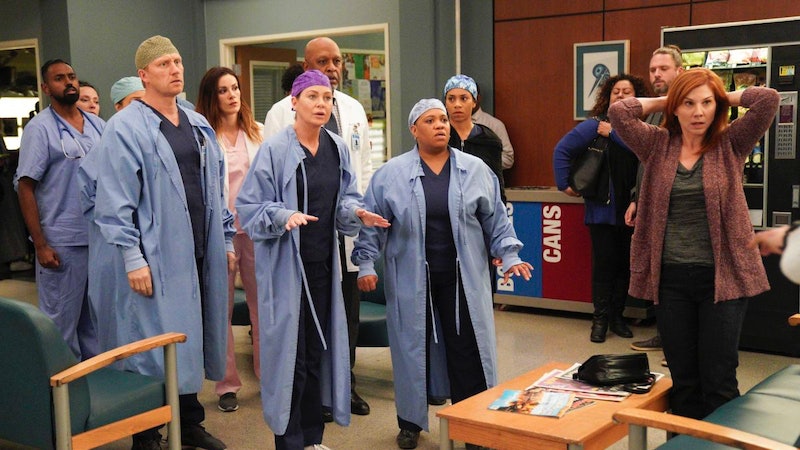 For the first time in 15 years, September came and went without a new season of Grey's Anatomy. The ABC medical soap has been a hallmark of the network's fall season since 2005, so for many fans it simply didn't feel like fall without the doctors of Grey Sloan Hospital onscreen. But now the long wait is finally over: the COVID-delayed 17th season arrives on Thursday, Nov. 12, and you're definitely going to need a Grey's Anatomy Season 16 recap to remember all the highs and lows of its tumultuous last season.

First, a brief refresher on where things stood heading into the season. The end of Season 15 saw the hospital — and all of Seattle — in the grips of an impenetrable fog. As the city was nearly brought to a standstill, several storylines came to a head. After Andrew turned himself in for the insurance fraud Meredith committed, she finally returned his "I love you" and headed to the police station to make things right. Bailey fired Meredith, along with Alex and Richard, for their roles in the insurance fraud scheme. Jo came clean to Alex about the situation with her birth mother that had brought her such mental anguish, and checked herself into a mental health facility. Teddy gave birth to her and Owen's daughter, Allison. And bickering lovers Maggie and Jackson got stranded in the fog... only for Jackson to mysteriously disappear into the mist.

Here's what came next for your favorite surgeons in a season full of messy love triangles:

After a lot of community service and even some jail time, Meredith finally went before the panel that would decide whether or not she would lose her medical license. When Meredith realized that the doctor who killed Derek was on the panel, she chewed him out in front of everyone — causing the man to have a seizure and die. Meredith ultimately got to keep her license, but Andrew also asked Meredith to take some time to figure out what she wanted from their relationship, since she clearly didn't respect him the way she had respected her former husband.

Enter McWidow. A gift from Cristina Yang herself, Dr. Cormac Hayes arrived at the hospital to potentially woo Meredith. But a wrench was thrown into the budding love triangle when Andrew began showing symptoms of bipolar disorder while struggling to diagnose a patient's mystery illness. Though he ultimately saved the patient, Andrew continued to exhibit increasingly erratic behavior, including venturing into a blizzard and accusing a patient of sex trafficking. Despite this, Andrew still managed to be instrumental in saving Richard Webber from a mystery illness (yes, another one).

In the Season 16 finale, Cormac officially asked Meredith out for drinks — but Meredith asked for a rain check. She then found Andrew having a breakdown and took him home to help care for him.

If Season 16 is remembered for one thing, it will be the abrupt departure of actor Justin Chambers — one of only four original cast members left on the show — and the controversial way the writers chose to deal with his exit from the series. Shortly after helping Meredith keep her medical license by organizing a bunch of her former patients to come speak on her behalf, Alex literally disappeared into thin air. After having been missing for several weeks, he sent letters to Jo, Meredith, Richard, and Bailey explaining where he'd gone. While getting in touch with people from Meredith's past, he reconnected with Izzie and learned that she had used the eggs they froze together all those years ago in order to give birth to a pair of twins. Feeling an obligation to help raise his biological children, Alex quit his job and left Jo — and his entire life and career — to stay in Kansas with Izzie and their kids.

After being fired by Bailey, Richard went to work with Alex at PacNorth, where he reconnected with an AA acquaintance, Gemma. Though Gemma tried to romantically pursue Richard, he rebuffed her. But that didn't stop Richard's wife, Catherine, from being jealous of the time Richard and Gemma were spending together. In a fit of pique, Catherine retaliated by buying PacNorth and absorbing it into Grey Sloan. Shortly afterward, Richard started developing symptoms of a mysterious illness — hand tremors, forgetfulness, even hallucinations — that led some to assume he had Alzheimer's. But Andrew discovered the truth: Richard's hip replacement was degrading and poisoning his blood with cobalt. Richard's life may have been saved, but his marriage has most certainly not been.

After Teddy gave birth to Allison, Owen finally proposed to the mother of his child. But when Teddy learned that Owen might also be the father of Amelia's unborn child, her doubts pushed her back into the arms of her former lover, Ted Koracick. Feeling guilty for cheating, Teddy convinced Owen to move up their wedding. But just before she was supposed to tie the knot, Tom asked Teddy to run away with him instead. While Tom and Teddy passionately hooked up, an unfortunate butt dial and embarrassing voicemail revealed the truth of Teddy's infidelity to Owen, who canceled his wedding to Teddy without telling her why.

The icky semi-incestuous relationship between step-siblings Maggie and Jackson finally came to a blessed end when Maggie broke up with him for abandoning her during the Great Fog. (Sure, he was off saving a family who wrecked their car, but still.) Maggie went through a tough time when she met Richard's niece Sabie — her cousin — operated on her, and lost her all in the span of a few short days. But she found a spark again when she reconnected with a former colleague from her residency days, Dr. Winston Ndugu, while at a conference in California. He admitted to Maggie that he'd always had a crush on her, and the pair had a whirlwind weekend romance.

Bailey and Ben were thrilled to learn that she was pregnant — and they were just as devastated when Bailey miscarried. While still mourning the loss of her unborn child, Bailey met foster kid patient Joey. After bonding for a few weeks, she and her husband made the monumental decision to invite Joey into their home, becoming the boy's new foster parents.

The relationship between Amelia and Link sped into the fast lane when she learned she was pregnant... and then hit a speed bump when she realized the timing of the conception meant that the baby could be either Link's or Owen's. When Link asked for a paternity test, Amelia broke up with him, wanting someone who would raise the child with her unconditionally. Link finally came around and confessed to Amelia that he wanted to be with her no matter who the father was, and — good news! — Amelia revealed that the baby is his after all. She gave birth to the baby in the season finale while Link was simultaneously performing Richard's life-saving surgery.

While Schmitt clearly wanted his relationship with Nico to get more serious, Nico only seemed interested in keeping things physical. Then he learned that, despite having made fun of Schmitt for being a "baby gay," Nico was actually not out to his own family. And then, the straw that broke the camel's back, Nico got a job with the Seattle Mariners, taking him away from Seattle Grace. Schmitt finally broke up with him and, having recently moved out of his mother's basement, found a new roommate in the also newly single Jo.

Will Meredith choose Andrew or Cormac? What will Jo do now that Alex is gone? Are Teddy and Owen done for good? Will Richard and Catherine ever reconcile? Why is Jackson even on the show anymore? Find out the answers to these cliffhangers when Grey's (finally!) returns on Nov. 12.

More like this
Everything You Need To Remember Before ‘The Handmaid’s Tale’ Season 5
By Grace Wehniainen
The ‘You’ Season 4 First Look Shows Joe’s New Identity And Potential Victims
By Bustle Editors
The ‘Emily In Paris’ Season 3 Release Date Is Here, Plus The First Footage
By Bustle Staff
Here's When 'The Crown' Season 5 Will Premiere — And What To Expect
By Bustle Editors
Get Even More From Bustle — Sign Up For The Newsletter