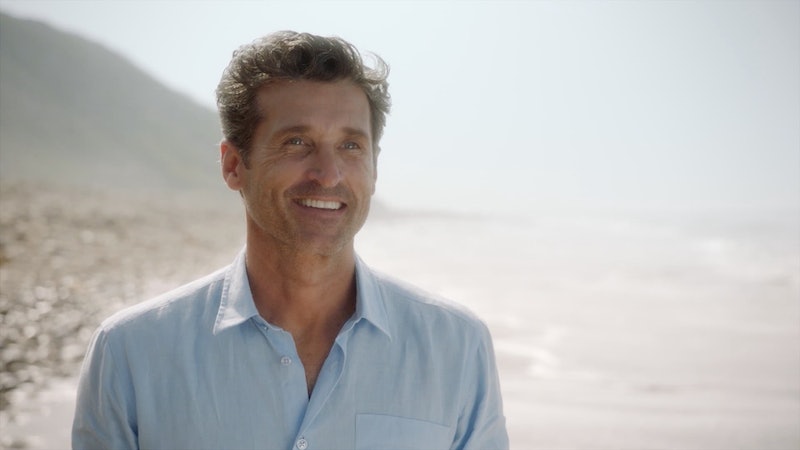 After being cut short due to coronavirus in April, Grey's Anatomy returned for Season 17 last week. Thanks to several flashbacks, it was able to salvage some scenes shot before the pandemic, but the present timeline picked up right in the thick of the COVID-19 crisis. As the doctors of Grey Sloan scrambled to treat patients, an overworked Meredith wound up passed out in the parking lot — where she was then reunited with Derek Shepherd in her subconscious. And if these Grey's Anatomy Season 17 theories are correct, it may not be the only big character return the show has planned. Read on to see who fans think could come back and what else the writers may have in store for this season.

Derek will appear in three more episodes, but he may not be the only familiar face fans will see this season. "What you saw last week that everybody freaked out about is just ... the tip of the iceberg of what's to come," Kevin McKidd (Owen Hunt) recently teased to Entertainment Tonight.

One eagle-eyed viewer pointed out that there were two more people on the beach where Meredith and Derek reunited, and the cast already confirmed there were no "random joggers" around. Another fan noticed that Chyler Leigh, aka Lexie Grey, recently started following the Grey's cast again on social media, suggesting she could be the next alum to come back. Other potential cameos? T.R. Knight (George O'Malley) and Eric Dane (Mark "McSteamy" Sloan). "You have to tune in and see who comes to the beach," Vernoff teased to Deadline. "It’ll be a joyful discovery."

There's plenty of opportunity for beloved characters from the land of the living to return, too. While fans are still holding onto hope that Sandra Oh's Cristina Yang will make an appearance at some point, the same Twitter user who noticed Leigh's social media activity pointed out that Sara Ramirez changed her bios on Instagram and Twitter to include Dr. Callie Torres, and the official Grey's Anatomy account recently started following her as well. (In 2018, Ramirez and Shonda Rhimes both expressed hope that Callie would come back to Grey Sloan someday.) Should Callie return, Calzona shippers are also hoping Arizona (Jessica Capshaw), who left Seattle to co-parent their daughter Sofia in New York, will be by her side.

Also worth noting? The Grey's Twitter account follows Katherine Heigl (Izzie Stevens), who, as fans now know, is with Alex Karev (Justin Chambers) "on a freakin' farm in nowhere Kansas" raising their 5-year-old twins, Eli and Alexis. Seattle is but a flight away.

TVLine reported via sources in April that the planned Grey's Season 16 finale, which was ultimately shelved amid the coronavirus pandemic, included a major character death. And following the Nov. 12 premiere, some fans believe Owen will die. While sorting out his failing relationship with Teddy, he made a point to mention possibly updating his will and changing who would take custody of Leo and Allison, to which his fiancée responded, ""I'm not OK with you dying, Owen!"

That may be foreshadowing, as ABC's synopsis for the Dec. 3 episode teases that Owen will face "a medical diagnosis that challenges more than he imagined." But assuming it's not a patient's diagnosis, chances are he'll recover: in July, McKidd renewed his Grey's contract for three years, according to Deadline.

Dempsey already prematurely confirmed that Meredith has coronavirus, and there's a good chance the illness will lead her to finally make a choice between DeLuca (Giacomo Gianniotti) and Hayes, aka McWidow (Richard Flood). Though DeLuca covered Meredith's shift so she could get some sleep, Hayes is the one who rushed to her aid upon discovering her unconscious in the Grey Sloan parking lot. After plenty of flirtation, it seems that a majority of Twitter users are rooting for Meredith and Hayes to finally get together.

After already saying "I love you" in the Season 17 premiere, Maggie and Winston seem to have gone from zero to 100 very quickly. Some fans opined that it may be too fast or too good to be true, and they could be right. The upcoming Dec. 3 episode will include Maggie getting a "not-so-subtle glimpse into Winston's background," per ABC. But given actor Anthony Hill's promotion to series regular this season, Winston won't be going anywhere anytime soon.

More like this
An 'Everything Everywhere All At Once' Star Just Joined The 'Loki' Season 2 Cast
By Grace Wehniainen
Nicola Coughlan Shared A Lady Whistledown Excerpt From ‘Bridgerton’ Season 3
By Grace Wehniainen, Alyssa Lapid and Sam Ramsden
A New 'And Just Like That' Table Read Pic Confirms A Key Character's Return
By Jack Irvin and Grace Wehniainen
Viserys’ Fate On 'House Of The Dragon' Could Differ From The Book In This Surprising Way
By Grace Wehniainen
Get Even More From Bustle — Sign Up For The Newsletter