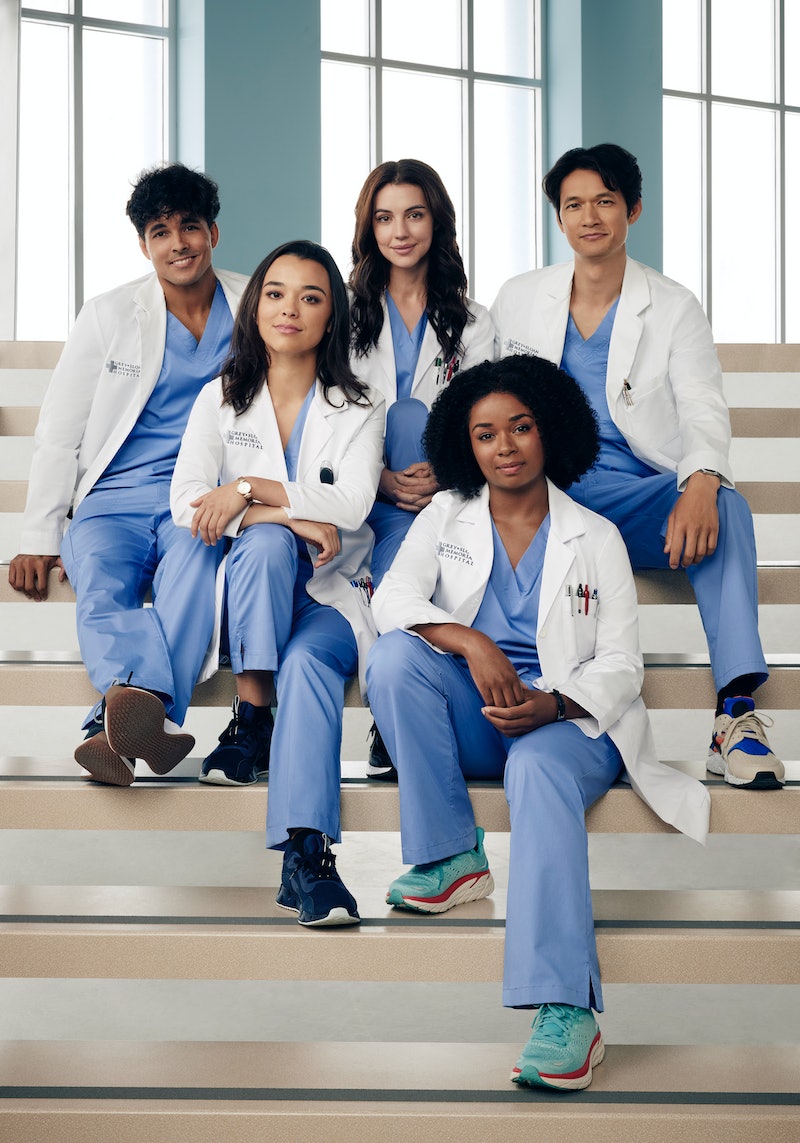 Spoilers ahead for the Grey’s Anatomy Season 19 premiere. Nearly two decades after Meredith, Cristina, Alex, Izzie, and George scrubbed in at the former Seattle Grace, there’s a brand new class of misfit interns on Grey’s Anatomy. While welcoming Grey Sloan’s next generation, the Season 19 premiere also paid homage to the OGs, and fans on Twitter were paging crash carts as the feelings of nostalgia washed over them.

Less than a minute into the Oct. 6 episode, viewers got their first callback to the 2005 series premiere with what else but a parallel awkward run-in between an attending (in this case, Link) and a new intern he recently slept with (newbie Jules Millin, played by Adelaide Kane). So when the ever-ethical Link decided to report their, uh, relationship (or, more accurately, non-relationship, as Jules would later reveal) to Meredith Grey, she certainly had firsthand experience.

Her reaction? “I’m in no position to judge you on this,” she said, referencing the early days of her relationship with Derek. “I do recommend you stay away from elevators for the foreseeable future.” Of course, longtime viewers know exactly what goes down on those hospital elevators. Even actor Chris Carmack, who plays Link, appreciated the nostalgic nugget of wisdom, tweeting, “Good advice at Grey Sloan!”

That wasn’t the only reference to the late Dr. Shepherd, as it was revealed more than halfway through the premiere that new intern Lucas Adams (Nicko Terho) is actually Derek’s “favorite nephew.” While prepping to assist on a rare organ transplant, he recited a line that made clear McDreamy’s legacy was very much still alive. “It’s a beautiful day to save lives,” he said, repeating the words his Uncle Derek first spoke years ago.

Up in the observation gallery, Meredith and Amelia were watching their “black sheep” nephew follow in his uncle’s footsteps. “Derek was a god to him,” Amelia said, before sharing her not-so-secret opinion that Lucas “doesn’t have what it takes” to be a surgeon. “He’s a mess. He doesn’t follow instructions. He has to do everything his own way,” she added. Sound familiar? “He’s me,” Amelia realized. Lucas is two Shepherds for the price of one!

After a first day full of requisite Grey’s life, death, drama, and romance, the new intern class — which also includes Mika Yasuda (Midori Francis), Simone Griffith (Alexis Floyd), and Benson “Blue” Kwan (Harry Shum Jr.) — decompressed in a very familiar hallway, essentially recreating an iconic Season 1 scene. Exhausted and exhilarated after their first day on the job, their playful banter ranged from competitive and snarky to playfully sarcastic and flirtatious, just like the OG class of 2005.

Of course, the new crew is only just starting to get their feet wet, so only time will tell just how much they are like (and unlike) Meredith and co. The episode’s title, “Everything Has Changed” may be partially true, but apparently some things have also stayed very much the same.

More like this
The First Trailer For 'That '90s Show' Includes So Many Nods To The Original Series
By Jack Irvin, Alyssa Lapid and Grace Wehniainen
'Bridgerton' S3 Teases Exciting Social Season For Penelope Featherington
By Bustle
The 'Kenan & Kel' Reunion On 'SNL' Took A Dramatic Turn, Thanks To Keke Palmer
By Brad Witter
Theo James Revealed The Truth About His 'White Lotus' Nude Scene & Fans Can't Cope
By Stephanie Topacio Long
Get Even More From Bustle — Sign Up For The Newsletter