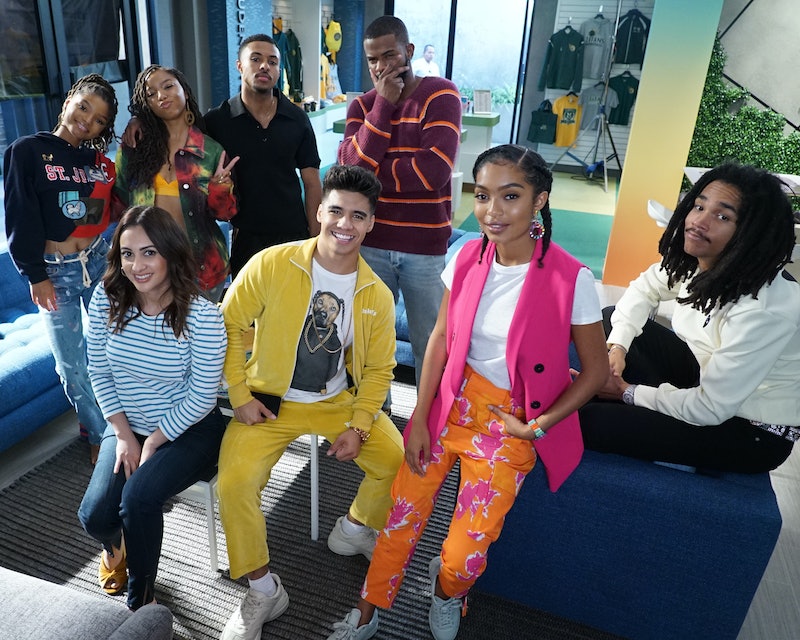 With so many questions left unanswered in the season finale, the recently announced Grown-ish Season 4 will have a lot of ground to cover when it returns this summer. First of all, that all-too-familiar Zoey and Aaron kissing cliffhanger really seemed to hint they could be endgame this time. This part of Aaron’s speech seemed to say it all: “I’m sick of waiting. The truth is I love you too, so much. So I want our story to start now. Like, right now.” Zoey, for her part, may have given an even bigger clue, explaining in voiceover that “reconnecting with [her] original path ... made 2020 a year none of us would ever forget.”

Even separately, she and Aaron have Season 4 storylines clearly outlined. After quitting her styling job with Joey Bada$$, Zoey officially reenrolled in classes at Cal U. Meanwhile, Aaron’s emotional graduation protest led to Cal U’s immediate private prison divestment, so his future in social justice advocacy has surely only just begun.

Elsewhere in the finale, there was the secondary cliffhanger of Vivek getting pulled over with drugs in the car. Even if he evades the law, he’ll have some explaining to do to his girlfriend now that she found his stash. The episode also left the already-dangling plot points of what happened after Nomi told the father of her baby about Luna, as well as Ana’s suspicions about Javi’s cheating. Plus, the aftermath of Doug and Sky’s painful breakup will surely loom heavily over Season 4.

Freeform has yet to confirm casting or announce the premiere date, but filming is already underway — at least judging by an Instagram post Shahidi shared from set. “Let’s goooo,” the actor, who stars as Zoey, captioned a Feb. 16 video of herself putting her own spin on Eminem’s “Without Me,” concluding with: “Zoey’s back. Season 4, tell a friend.” The sign on her door also included the Grown-ish subtitle “Senior Year.”

There’s no reason to believe the core group won’t return. (The Grown-ish cast includes Yara Shahidi, Trevor Jackson, Luka Sabbat, Francia Raisa, Emily Arlook, Jordan Buhat, Chloe Bailey, Halle Bailey, and Diggy Simmons.) However, unless Zoey super unexpectedly returns to her styling job, odds are that the guest-star runs for Joey Bad$$ and Saweetie (who played Indigo) are over. The biggest question mark, perhaps, surrounds Season 3 recurring cast member Ryan Destiny (Jillian). Although her stint at Cal U was only supposed to last one semester, her connection with Luca is undeniable, as the finale called out with a glimpse of them video chatting after she left Cal U. In their final chat, they both made it clear they weren’t into the idea of a long-distance relationship, though, so Destiny’s potential return could foreshadow what they’ll decide.

The “Senior Year” season could well be Grown-ish’s final chapter, but Shahidi did give fans hope that the series could continue past the Cal U years. “When talking about grown-ish, people often don’t know one of the clunkier first names for it was college-ish,” she explained to Complex in January. “Ultimately, the reason why we didn’t have a name about college was that [the show] is really about growing up more than being at school.”

This article was originally published on March 17, 2021