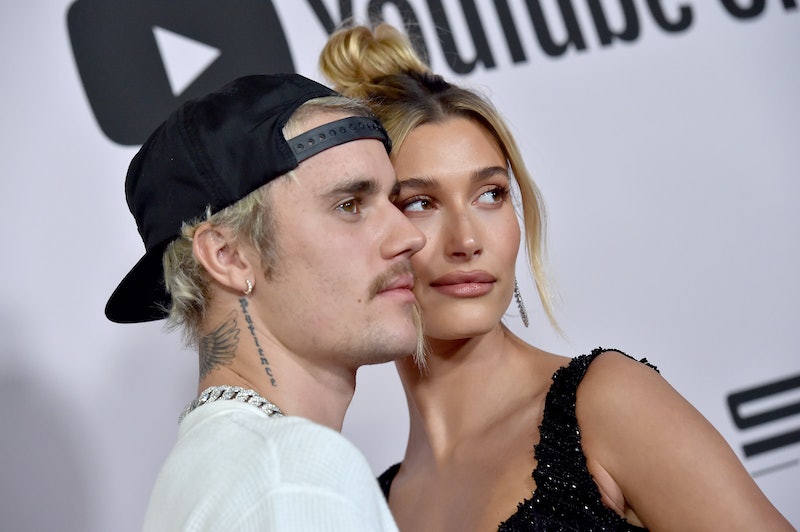 Yes, Hailey Bieber is aware of the celebrity divorce rate, and no, she’s not worried. In a recent interview with Elle, the model got candid about her and Justin Bieber’s “very difficult” first year of marriage, explaining that she desperately wanted her privacy back at certain moments. But even though the couple has had their fair share of ups and downs, the model remains confident that they’ll be together forever.

“I learn new things about him and about myself and about our relationship all the time,” Hailey told the magazine. “Do we have little fights and stuff that we have to work through sometimes? Yeah, of course, but it really doesn’t ever feel like work, because I love him so much. I see forever with him.”

The Biebers quietly tied the knot at a New York courthouse in September 2018, which was followed by a larger wedding celebration with friends and family about a year later. According to Hailey, the “Anyone” singer was “at a stage of his life” where he was ready to move on from partying and build a relationship more serious than those from his past. “We were friends first for a really long time before there was anything romantic,” she said. “But we always knew that we were aligned on what we wanted in our future.”

That future included getting married young and “having a family young and building a life,” which is something the model said they both saw for themselves before realizing they wanted it with each other. Still, Hailey acknowledged that they exchanged their vows very early in life. “I mean, I was married when I was 21, two months before I turned 22, which is insanely young,” she said. “And sounds almost ridiculous when you say it out loud.”

However, the pair knew that getting married was the right choice for them at the time — especially given how quickly they had to grow up in the spotlight. “I do think for somebody like me and somebody like Justin, [it’s different].” she added. “We’ve seen a lot for our age. We have both lived enough life to know that’s what we wanted.” Still, nothing could’ve prepared the model for the level of media scrutiny and attention that comes with marrying one of the most famous pop stars in the entire world.

“In the beginning of our marriage, I just wanted to hide,” Hailey explained. “I was like, ‘I don’t want people so in my business. I feel like everybody’s up my *ss.’ I was like, ‘Can there be no anonymity? Can I have any of it back?’” Of course, she couldn’t. However, she did find one solution that worked for her: turning off her Instagram comments. “I remember someone telling me that [turning off the public comments] really lowers your engagement,” she said. “And I was like, ‘I could give a f*ck about engagement! People are terrorizing me. Engagement, enschagement. I don’t care!’”

For what it’s worth, spending quality time with Justin at home amid the ongoing coronavirus pandemic has also improved their marriage. “Over the last six years of my career, I’ve never gone this long without working,” Hailey explained. “Quarantine has removed any expectations of work, and there is no pressure of having to be anywhere. It’s the same for Justin. We’ve gotten so much solid alone time. It’s like this long, extended vacation where we get to hang out together all the time.”

While some might say that too much alone time could lead to messy arguments and potentially a breakup, Hailey isn’t concerned. “I think any relationship can fail, Hollywood or not,” she said after admitting that celebrity relationships often fail. “Is it harder in the public eye? Absolutely. But I think the two of us are grounded by our faith. I’m not saying it’s this easy-peasy thing that doesn’t take work. We talk to a therapist. We do what we have to do.”