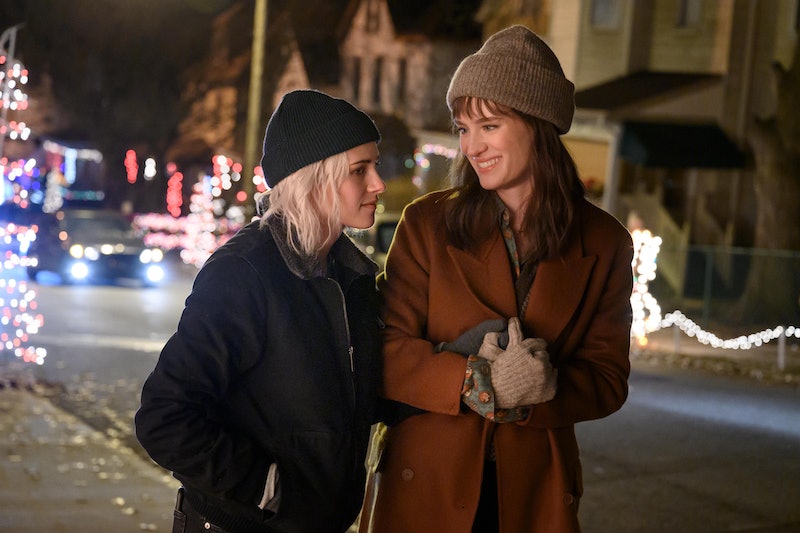 There are hundreds of beloved Christmas movies out there, as well as hundreds of romantic comedies to love. Queer rom-coms have definitely come a long way since 1999's But I'm a Cheerleader. But what about the queer holiday rom-com? Has there ever even been a mainstream one? Enter Happiest Season, now streaming on Hulu.

Directed and co-written by But I'm a Cheerleader alum Clea DuVall, Happiest Season tells the story of Harper (Mackenzie Davis), a daughter from a somewhat uptight family who decides to bring her girlfriend Abby (Kristen Stewart) home for Christmas. But there's one huge catch: Harper hasn't come out to anyone in her family and intends to pass off Abby as her roommate. Christmas rom-com hijinks ensue, exactly the kind you'd see in a movie like The Family Stone or The Holiday, except this time, the backbone is a love story between two women; something DuVall says was missing from the Christmas rom-com canon.

"I love Christmas movies but I had never really seen myself represented in one before," DuVall tells Bustle from a set visit, where we spoke with much of the cast. Her main goal when coming up with the idea was "wanting to feel like I was seeing me in a movie like this, which I had never seen before. And my experience is not unique. I'm not the only one going through it. So there has to be a lot of other people who are also feeling underrepresented."

So DuVall reached out to writer and actor Mary Holland, with whom she'd worked on Veep, and asked if she'd be interested in co-writing the queer holiday rom-com. Together, they penned the script that would embrace all the fun Christmas movie tropes while adding an element of queerness to the genre. "As a straight, cisgender woman myself, I'm really cognizant of the fact that this is a story that needs to be told, and is long overdue being told," Holland said. She also plays middle sister, Jane.

It's a story queer icon Kristen Stewart felt needed to be told, too. And even being on the set of the film was a radical experience for Stewart. "It's so nice to come to work and feel like I can say anything," she says. "I'm not implying that I've had inhibited experiences because of the lack of queerness in other movies that I've done, but in this, we all feel so visible to each other and so understood. It's so permissive and it feels f*cking great."

Davis was also excited to be a part of a queer love story that didn't use the usual tropes like "Bury Your Gays" or have a catastrophic outcome. "It's really wonderful to be a part of positive, non-tragic depictions of queer love that don't always have to be an incredible struggle to get through and end in tragedy," she says.

But that doesn't mean there aren't obstacles. Harper's parents, played by Mary Steenburgen and Victor Garber, are a bit old fashioned and conservative, so Harper's reluctance is understandable. However, Steenburgen and Garber were anything but reluctant to be a part of the film. "It felt very exciting to be a part of, even [though] the part I'm playing, is someone who needs to grow a little bit," Steenburgen says. "This is a comedy, but often comedies are the things that make a change and that put a mirror up there for us to see."

Garber adds that making this kind of comedy, "feels so natural. We've come a long way. We're nowhere near where we have to be, but we've made steps." Here's hoping that Happiest Season pushes Hollywood even further in the right direction.

More like this
Khloé Kardashian Debuts Baby Boy On 'The Kardashians' Season 2 Premiere
By Jake Viswanath
'Ramy' Will “Probably” End With Season 4, According To Ramy Youssef
By Brad Witter
UK Viewers Will Have To Wait To Watch The Handmaid’s Tale S5
By Maxine Harrison
18 Principal Ava Quotes That Prove She's The Queen Of Shade On 'Abbott Elementary'
By Grace Wehniainen
Get Even More From Bustle — Sign Up For The Newsletter