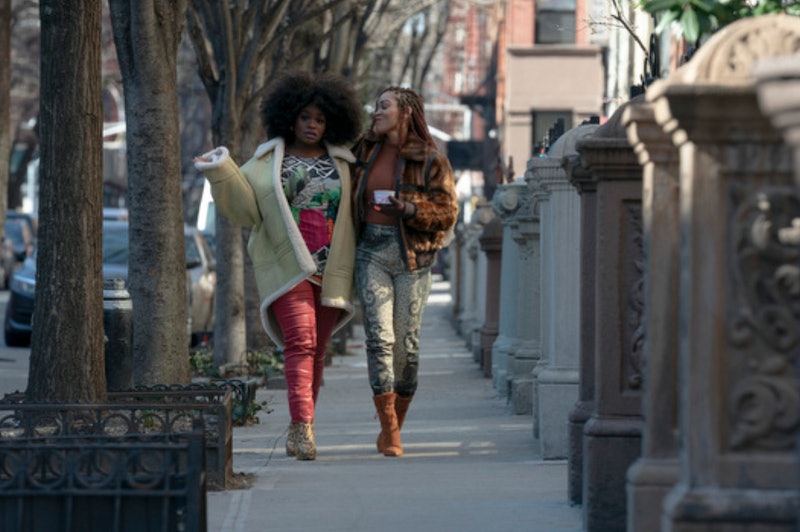 Come Dec. 3, Amazon is sending audiences to the mecca of Black culture in America: Harlem, New York. Created by Tracy Oliver (Girls Trip), the streaming service’s new series, Harlem, follows a group of 30-something girlfriends living in New York as they navigate work and relationships together. There’s Camille (Meagan Good), an anthropology professor at Columbia struggling with her love life; Tye (Jerrie Johnson), a queer app developer who’s allergic to vulnerability; Quinn (Grace Byers), a hopeless romantic and fashion designer with a trust fund; and Angie (Shoniqua Shandai), a vibrant singer with no filter.

Oliver told Entertainment Weekly that she came up with the idea for the show a few years ago, when she realized "there just wasn't a lot of, like, Black female friendship stories on the air.” She added that a lot of shows about women in their 20s portray it as a “time that you're young and you're crazy and you're figuring it out. But then, by the time you reach your 30s, you should just have it all mapped out,” which didn’t resonate with her. "I was like, 'But I'm in my 30s and I don't have everything together.' And I have so many friends that are still figuring themselves out too, or even starting over... And so I was kind of like, 'Well, let's be truthful about how the 30s doesn't necessarily mean that you have it all together.'"

Though Amazon has yet to announce if Harlem will return for Season 2, now seems like an apt time for it to find success. HBO’s hit series Insecure, which similarly follows a group of Black friends in their 30s, is coming to an end after five seasons later this month, and fans will surely be looking for something to fill the hole. There’s also a lot of star power supporting Harlem behind the scenes: among its executive producers are Amy Poehler and Pharrell Williams.

Harlem star Good has yet to weigh in on the possibility of a second season, but she did speak to PopSugar about her hopes for the show. "I mainly hope that [people] see themselves and they realize that they're not crazy and they're just figuring it out and that's OK," she said. “And I hope that people have fun. I hope that they laugh. I hope that they see their best friends in it and people that are in their lives. And I just hope that they relate to it and feel seen."

With any luck, Harlem can join the ranks of Girlfriends, Sex and the City, and Insecure in the pantheon of great shows devoted to female friendships. If it’s renewed, viewers can likely expect a Season 2 in late 2022, depending on how long it takes for Amazon to make the decision (according to Deadline, the streaming service ordered the series in July 2019 and began production in January 2020, though filming was obviously delayed amid lockdown). This post will be updated as more information becomes available.