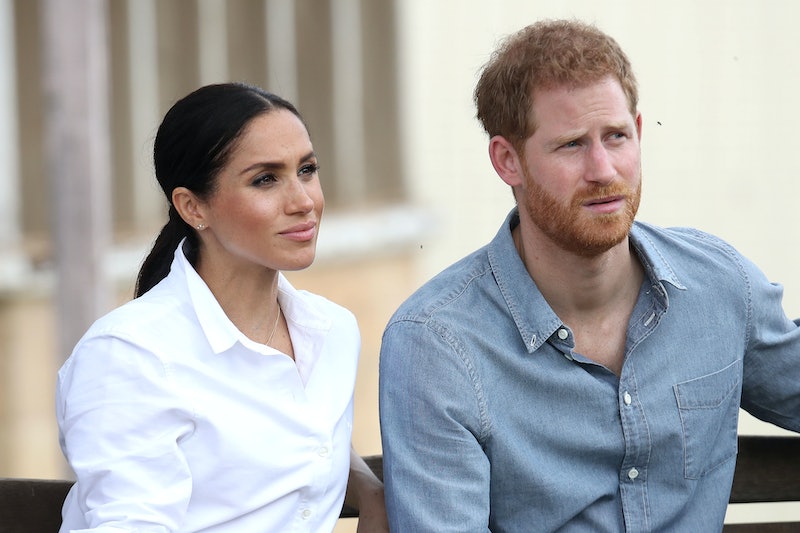 The Duchess of Sussex will not let her father have the last word. On the third episode of Netflix’s Harry & Meghan, which premiered on Dec. 8, Prince Harry and Meghan Markle addressed her dad Thomas Markle’s actions in the press that lead to their estrangement, with Harry admitting that he “shouldered” responsibility for the breakdown of his wife’s relationship with her dad.

Leading up to the couple’s May 2018 wedding, it was reported that Meghan’s father Thomas staged paparazzi photos of him reading up on British history and getting his wedding tuxedo fitted for payment from tabloids. In the episode, Meghan recalled her and Harry calling him to let him know about the accusations, which he denied while declining their offer to bring him to the UK sooner to avoid the frenzy. “I was like, ‘It doesn’t make sense,’” she said. “And when we hung up, I looked at H. I was like, ‘I don't know why, but I don’t believe him.’”

Later that week, Thomas was admitted to the hospital after a heart attack, and the couple said they couldn’t get ahold of him. As a result, Meghan revealed that she learned her father wouldn’t attend the wedding through tabloids. “The unraveling happened that week when he wouldn’t pick up my call,” she said. “Instead, you’re talking to TMZ.”

“It’s incredibly sad what happened. She had a father before this and now she doesn’t have a father. And I shouldered that...”

After some questionable text messages and heated talks, their relationship essentially ended, which Harry felt a lot of guilt about. “Of course, it’s incredibly sad what happened,” he said. “She had a father before this and now she doesn’t have a father. And I shouldered that because if Meg wasn’t with me, then her dad would still be her dad.”

Meghan’s mother Doria Ragland, who divorced from Thomas when their daughter was 6 years old, added that she was “absolutely stunned” that her ex-husband would become a part of the media’s frenzy surrounding the couple. “I felt sad that the media would run with this, that he would capitalize,” she said. “Certainly as a parent, that’s not what you do. That’s not parenting.”

Nearly three years after the debacle, Thomas apologized to his daughter and expressed regret over the incident to Good Morning Britain, adding that he staged the photos because he felt unprotected by the press attention caused by his daughter’s relationship. However, he also stated that he “pretty much said goodbye” to Meghan after alleging that Harry texted him, “If you had listened to me, this wouldn’t have happened to you.”

“Me laying in a hospital bed after I’d had a procedure and getting a stent put here and a stent put here [points to his chest], felt that that was kind of snotty, so I hung up on him,” he said. “And that’s the last conversation we ever had.”

More like this
Brittany Snow Files For Divorce From Tyler Stanaland After 'Selling The OC' Drama
By Grace Wehniainen and Radhika Menon
A Royal Lie: Harry Reveals The Truth About Princess Diana’s Ring
By Marina Watts
Prince Harry Incorrectly Recites Christina Aguilera’s “Genie In A Bottle” Lyrics
By Jake Viswanath
I Read Prince Harry's 'Spare' So You Don’t Have To: 11 Highlights To Know
By Marina Watts
Get Even More From Bustle — Sign Up For The Newsletter
From hair trends to relationship advice, our daily newsletter has everything you need to sound like a person who’s on TikTok, even if you aren’t.