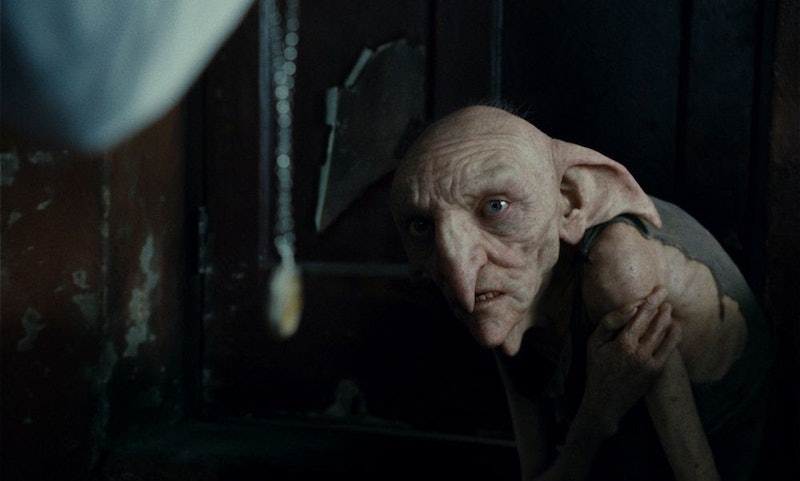 As a lifelong Harry Potter nerd and unofficial Wizarding World expert, all of my most intrusive 3 a.m./shower thoughts revolve around the books. Having read the series over 30 times (about twice a year since I was 16, it’s not that weird!), I’ve basically got all eight books memorized. It’s both a blessing and a curse — the blessing part comes when I’m playing Harry Potter trivia and the curse is when I uncover an obscure plot hole that will haunt me to my grave.

Though I’ve identified a fair amount of punctures within the intricate tapestry [name redacted] invented (Why didn’t Hagrid get his wand back after he was proven innocent? Why didn’t the Order just break the prophecy?), none are more irksome than this: Why couldn’t Kreacher destroy Voldemort’s locket?

If you’re not a raging super-nerd, like I am, allow me to explain. In Harry Potter and the Deathly Hallows, Harry, Ron, and Hermione begin their hunt for Horcruxes. Eventually, the quest leads them to 12 Gimmauld Place, where Kreacher, the Black family house-elf, tells them of the torture he suffered at the hands of Lord Voldemort decades before.

Regulus Black (brother of Sirius) told Kreacher that the Dark Lord required a house-elf for some top-secret business — and he was to be that elf. Kreacher was instructed to help Voldemort complete a task and then come home, so he accompanied Voldemort to a cave by the sea. There, the elf was forced to drink a potion that burned his insides and made him see terrible things. He was dragged beneath the water by an army of inferi, but escaped by Disapparating home. (Does anyone see where I’m going with this?)

After hearing the tale, Harry is shocked that Kreacher could leave Voldemort’s sanctum so easily — after all, wizards cannot Apparate or Disapparate within the walls. Kreacher explained that “the house-elves highest law is his master’s bidding” and “Kreacher was told to come home, so Kreacher came home.” Put simply, elf magic is not confined to the laws of wizards — they can perform nearly any magic, if instructed to by their master.

In the same conversation, however, Kreacher says that Regulus ordered him to destroy the locket and though Kreacher did “many powerful spells,” he could not destroy or open it. BOOM. Plot hole. If a house-elves highest law is his master’s bidding, Kreacher should have been able to destroy the locket with his own brand of magic (not to mention, he probably could have Disapparated with Regulus so he wouldn’t have to lose his life for the cause).

*Pauses to let that sink in.* Now, you too will be haunted by this glaring discrepancy. Don’t say I didn’t warn you.

More like this
Netflix Shut Down 'Bridgerton' S3 Rumours About A “Very Dark” Storyline
By Bustle
Rupert Grint Just Shared A *Major* Update About Ron Weasley’s Future
By El Hunt
Bill & Frank’s 'The Last Of Us' Episode Has Twitter Emotionally Wrecked
By Alyssa Lapid
Everything To Know About 'RHONY' Season 14
By Jake Viswanath, Alyssa Lapid and Brad Witter
Get Even More From Bustle — Sign Up For The Newsletter
From hair trends to relationship advice, our daily newsletter has everything you need to sound like a person who’s on TikTok, even if you aren’t.