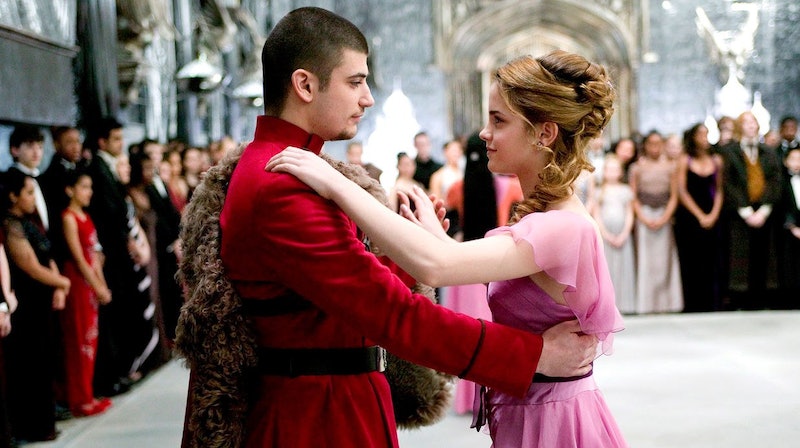 No matter what age group you identify with, most Millennials and Gen Z’ers have grown up with the global phenomenon that is the Harry Potter franchise. Whether or not you consider yourself a Potter fanatic, chances are you're aware of the story, characters, and cast. Even though the eight Harry Potter movies are a popular streaming choice for people looking for a cozy nostalgic film, it's easy to forget that the original cast have actually grown up with us, and some have had quite the transformation since their Hogwarts days. One character in particular, actor Stanislav Yanevski, who played Viktor Krum, looks very different today.

Yanevski starred in the 2005 film Harry Potter and the Goblet of Fire and played Krum, the heartthrob Bulgarian wizard who caught the attention of fan favorite Hermione Granger. In the film, the character visited the Hogwarts School of Witchcraft and Wizardry whilst competing in the Triwizard Quidditch Tournament.

According to Marie Claire, the 37-year-old has pretty much stayed out of the acting spotlight since his role in the Goblet of Fire, but has managed to build up a fairly big social media following, particularly on Instagram. On Yanevski's profile, you can expect to find snaps of luxury holidays, tattoos, the occasional beard, and a fair amount of muscle. If you haven't been following the actor since his Harry Potter days, you may want to prepare yourselves.

Yes, that's what Viktor Krum looks like today, and the actor's personal profile has an impressive 235,000 followers as of September 2022. As well as documenting his travels and gym progress, the Harry Potter star is still involved with the franchise that made him famous, seen in posts with details about fan meet and greets. He’s made an effort to continue his appearances among Harry Potter fans, often traveling the world to be present at comic conventions. In May 2022, the actor surprised fans at the Dublin WizardCon, signing autographs, taking pictures, providing fans with an in-person, authentic experience, and perhaps even performing a spell or two.

And in one post in April 2022, Yanevski is seen trying on the famous sorting hat. I wonder which house he belongs to. (His tattoos scream Slytherin.) Even though the actor has pursued other interests like fitness, YouTube content creation, and even motorcycles, his Instagram bio has confirmed that he still very much associates himself with the acting industry, labeling himself as an #actor and an #adventurer.

According to his official IMDB page, since appearing in the Goblet of Fire, the Bulgarian actor has starred in films such as the 2007 horror flick Hostel: Part II and the 2011 British film Resistance. Yanevski has also ventured into the world of television and appeared on the Bulgarian crime series Undercover, as well as the comedy-drama series Stolichani v Poveche — which translates to Sofia Residents in Excess.

Yanevski was also seen in the 2019 Bulgarian romance-adventure film Opurnichavite, in which he developed his love for motorcycles. Coming up, the actor will be featured in Devil’s Right Hand, a mini-series based off of old country western movies of the 1950s. It’s clear the beloved Krum has kept himself busy post-Potter.

In addition to treating fans with the occasional selfie, it appears Yanevski is a fan of good old-fashioned inspirational quotes, seen on his this post. It reads: “‘Just living is not enough. One must have sunshine, freedom and a little flower.’ – Hans Christian Andersen”

Fans of the actor and Harry Potter movie series who have stumbled upon his Instagram seem to be equally as surprised at the character's appearance today. And many of them have taken to their own social media pages to share their appreciation of Krum's transformation.

Despite his most notable Harry Potter appearance taking place in 2005, the character of Viktor Krum did pop up once again in the first chapter of the final film, Harry Potter and the Deathly Hallows, Part One back in 2010 — and even though it shouldn't come as a surprise the actor has grown up a bit since then, it's still very interesting to see just how much he has changed.

This article was originally published on November 2, 2018