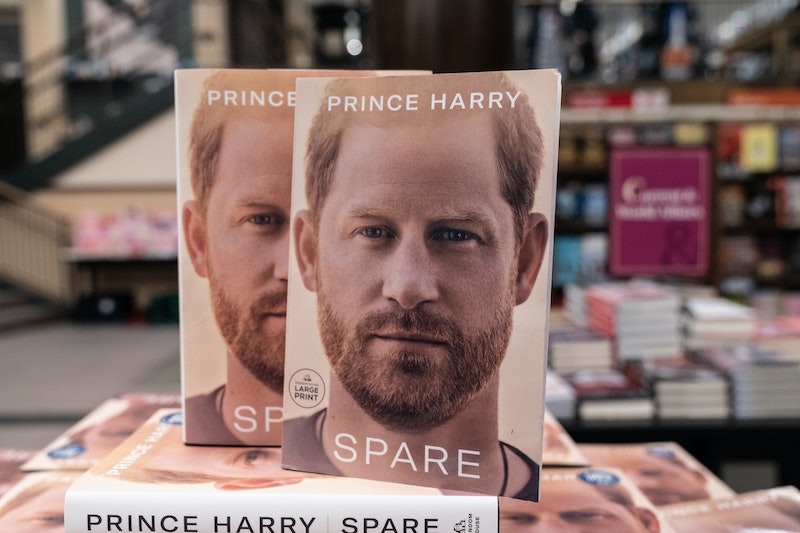 Prince Harry doesn’t spare us the details about anything in his bombshell memoir Spare, writing about his years at Eton, his time in Afghanistan, the loss of his mother, and his relationship with Meghan Markle. He claims he did drugs at a young age and speaks about his frostbitten penis. Though the book includes some more lighthearted anecdotes — like meeting the Spice Girls or partying with Courteney Cox — his book takes a deeper dive into darker moments of his life.

Weeks after he and Meghan debuted their Netflix docuseries Harry & Meghan, the Duke of Sussex continues to divulge more royal revelations. Nothing is off-limits as he alleges King Charles III, planted stories in the press. He also recalls a physical altercation with his brother William.

Here are some of the most shocking revelations about the royal family from Harry’s memoir.

Harry’s memoir starts off on a heartbreaking note — Princess Diana’s death. He remembers the day before she died and regrets not taking time to speak with her more on the phone on Aug 30, 1997. “They tried, darling boy, I’m afraid she didn’t make it,” Harry recalls Charles telling him. “These phrases remain in my mind like darts on a board.” The closest Charles got to showing affection was putting his hand on Harry’s knee and telling him it was going to be OK. “That was quite a lot for him. Fatherly, hopeful, kind. And so very untrue.”

He later recalls that after the funeral service, the family’s car stopped by to greet mourners who left mementos for them, and he grabbed Charles’ hand, immediately regretting it. “I reached for my father's hand, for comfort, then cursed myself, because that gesture set off an explosion of clicks,” he said. “I’d given them exactly what they wanted. Emotion. Drama. Pain.” Throughout his book, Harry denies that Diana did die, and copes with her death for many years by deciding that she went missing.

William Allegedly Attacked Harry Over His Relationship With Meghan

Perhaps one of the biggest bombshells to come out of Spare is the physical altercation between Harry and William. It allegedly happened in 2019 at Harry’s London home, and William had called Meghan “difficult,” “rude,” and “abrasive.” William then said he was trying to “help” Harry, who didn’t want to talk to his older brother while he was riled up.

Harry wrote that William “called me another name, then came at me. It all happened so fast. So very fast. He grabbed me by the collar, ripping my necklace, and he knocked me to the floor. I landed on the dog’s bowl, which cracked under my back, the pieces cutting into me. I lay there for a moment, dazed, then got to my feet and told him to get out.” William told Harry he didn’t need to tell Meghan about the fight and denied attacking him at all.

Later, Meghan found cuts and bruises on his back following the incident and said she “wasn’t that surprised, and wasn’t all that angry,” about the fight. “She was terribly sad.”

Charles Used To Do Headstands In His Underwear

Nothing has been off-limits in Spare, including this TMI anecdote about Charles’ scantily-clad headstands. Harry said that his father suffered from “constant neck and back pain” from past polo injuries, and one might find him in these compromising positions. “Open the wrong door and you might burst in on Pa while his valet was helping him dress,” he writes. “Worse, you might blunder in as he was doing his headstands. Prescribed by his physio, these exercises were the only effective remedy for the constant pain in Pa’s neck and back.”

With Charles and Camilla the Queen Consort’s first names both starting with C, Harry claimed that they asked Kate Middleton to spell out her name “Catherine” with a K when joining the royal family, to avoid any confusion — something Kris Jenner never would have done. “It would be too confusing to have another. Make it Katherine with a K, they suggested,” according to Harry. William was “inexpressive” about the suggestion and they ultimately ignored it.

Despite what many would assume, the princes were not each other’s best men at their respective weddings, calling the reports “bare-faced lies.” For William, it was his friends James and Thomas. Meanwhile, Harry’s best man was his friend Charlie.

“The public expected me to be best man, and thus the Palace saw no choice but to say that I was. In truth, Willy didn’t want me giving a best-man speech. He didn’t think it safe to hand me a live mic and put me in a position to go off-script. I might say something wildly inappropriate. He wasn’t wrong.” He also pointed out that not outing the “civilians” would protect them from the press who would have “chased them, tracked them, hacked them, investigated them, ruined their families’ lives.”

William & Kate Allegedly “Howled With Laughter” At THAT Costume

In 2005, William’s friend was throwing a “natives and colonials” party, and Harry was stuck between two costume choices: a British pilot’s uniform and a “sand-colored Nazi uniform.” “I phoned Willy and Kate, and asked what they thought. Nazi uniform, they said,” Harry remembered, purchasing the costume and bringing it home to try on. “They both howled. Worse than Willy’s leotard outfit! Way more ridiculous! Which, again, was the point.”

Following the party, where the media was keen on getting photos of the royals in costumes, Harry’s costume was noticed and the pictures wound up in The Sun. “What followed was a firestorm, which I thought at times would engulf me," he wrote. “I felt that I deserve to be engulfed. There are moments over the course of the next several weeks and months when I thought I might die of shame.” Harry called it “one of the biggest mistakes of my life,” in the Netflix documentary, and wrote that he made reparations with “some sort of public atonement.”

Following Princess Diana’s death in 1997 and Charles’ relationship with Camilla growing, William and Harry asked him not to marry again. “The only thing we asked in return was that he not marry her,” Harry wrote. “You don’t need to remarry, we pleaded. A wedding would cause controversy. It would incite the press. It would make the whole country, the whole world, talk about Mummy, compare Mummy and Camilla, and nobody wanted that.”

“You don’t need to remarry, we pleaded,” he wrote. “A wedding would cause controversy. … We support you, we said. We endorse Camilla, we said. Just please don’t marry her. Just be together, Pa.” Harry added that he did want Camilla happy. “Maybe she’d be less dangerous if she was happy,” he wondered.

In Spare, Harry claims that his brother had Princess Diana’s beloved sapphire engagement ring years before he popped the question to Kate Middleton. “The papers published florid stories about the moment I realized Willy and Kate were well matched, the moment I appreciated the depth of their love and thus decided to gift Willy the ring I’d inherited from Mummy, the legendary sapphire,” he recalled. “A tender moment between brothers, a bonding moment for all three of us, and absolute rubbish: none of it ever happened. I never gave Willy that ring because it wasn’t mine to give. He had already had it. He’d asked for it after Mummy died, and I’d been more than happy to let it go.”

William and Kate had suspected that Harry was seeing someone, asking him over to dinner to discuss their assumptions one evening. When Harry revealed he was dating Meghan, the couple was shocked. “Their mouths fell open. They turned to each other. Then Willy turned to me and said ‘Fuck off!’’

“I was baffled until Willy and Kate explained that they were regular – nay, religious – viewers of Suits. Great, I thought, laughing. I’ve been worrying about the wrong thing. All this time I’d thought Willy and Kate might not welcome Meg into the family, but now I have to worry about them hounding her for an autograph.”

Many thought it was Meghan’s decision to leave Suits following her engagement, but Harry claimed otherwise. “Meg packed up her house, gave up her role in Suits. After seven seasons. A difficult moment for her, because she loved that show, loved the character she was playing, loved her cast and crew — loved Canada,” he said. However, Harry wrote that her life had become “untenable,” claiming The Firm reportedly tried to change Meghan’s Suits character.

“The show writers were frustrated because they were often advised by the Palace comms [communications] team to change lines of dialogue, what her character would do, how she would act.”

More like this
Prince Harry Incorrectly Recites Christina Aguilera’s “Genie In A Bottle” Lyrics
By Jake Viswanath
Here's How Netflix Should Adapt Prince Harry's Memoir Into A Movie
By Ginny Hogan
Here’s Why Tyler Perry Helped Prince Harry & Meghan Markle When They Moved
By Marina Watts
Meghan Trainor & Daryl Sabara Are Expecting Their Second Baby
By Jake Viswanath
Get Even More From Bustle — Sign Up For The Newsletter
From hair trends to relationship advice, our daily newsletter has everything you need to sound like a person who’s on TikTok, even if you aren’t.