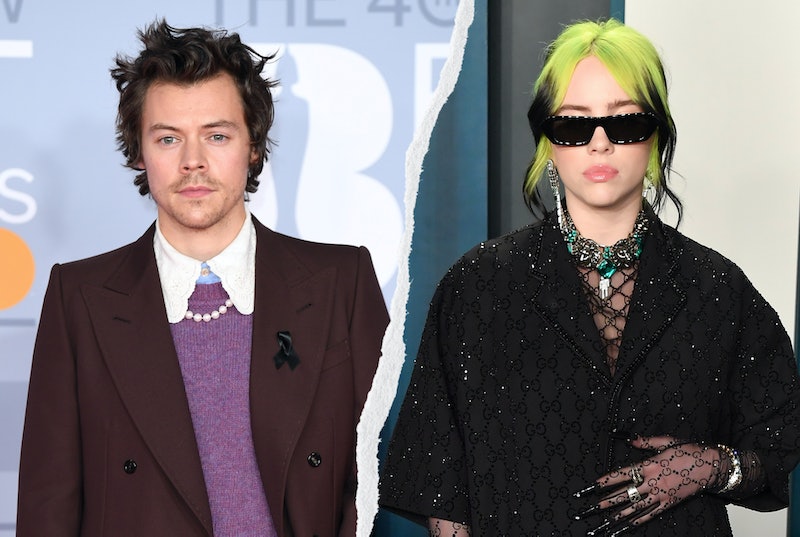 Harry Styles and Billie Eilish are just as famous for their incredible fashion sense as they are for their chart-topping music — something that Gucci apparently knows all too well. Now, the pop stars will show off their signature style in the luxury fashion brand's new short films, as per Variety. The films will be shown as part of a new virtual event called GucciFest, which will take place later this month.

On Thursday, Nov. 5, the fashion house announced that they would present their upcoming collection, "Ouverture of Something that Never Ended," as a series of short films with the same name. The series will follow actor Silvia Calderoni as she randomly encounters international stars from all walks of life decked out in Gucci, including Styles and Eilish. The films will also feature appearances from Florence Welch, Jeremy O. Harris, Sasha Waltz, Arlo Parks, Paul B. Preciado, Achille Bonito Oliva, Darius Khonsary, Lu Han, and Ariana Papademetropoulos.

While both artists will be featured in the series, it is not yet known if they'll co-star together in the same short film. What is clear, however, is that Eilish has been a longtime fan of the brand and creative director Alessandro Michele's work. She has sported custom head-to-toe Gucci looks at events like the 2020 Grammys and Billboard Music Awards, making the label a significant part of her signature wardrobe.

Ouverture marks just the latest project in a string of collaborations between the "Watermelon Sugar" singer and Gucci. The One Direction alum first appeared in the company's Men's Tailoring campaign in June 2018, where he was nearly outshined by his co-star, who was a literal chicken. He later turned heads at the 2019 MET Gala with his daring Gucci get-up before returning for the Tailoring Cruise 2019 campaign the next year, where baby goats, sheep, and a pig stole the spotlight. Styles also collaborated with the fashion house to design a limited-edition T-shirt to commemorate his hit sophomore album Fine Line.

The new films were co-directed by Michele and famed film director and screenwriter Gus Van Sant. GucciFest will stream live on YouTube Fashion from Nov. 16-22, but exact premiere dates for Styles and Eilish's films are not currently known.