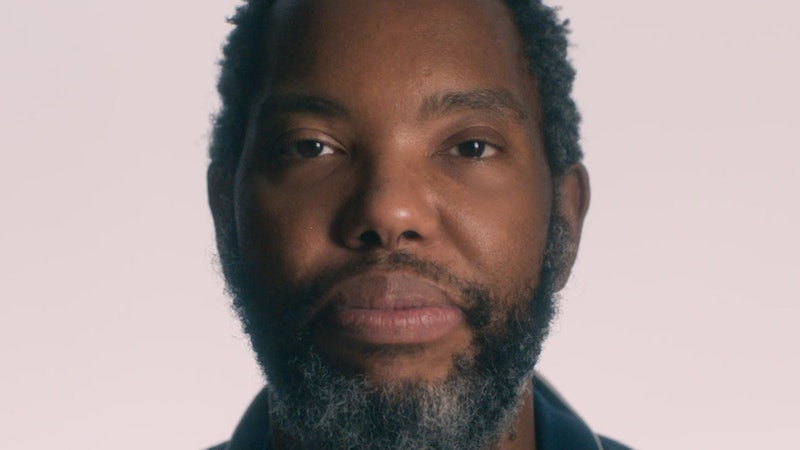 Ta-Nehisi Coates' book Between the World and Me, first published in 2015, is written as a letter to Coates’ then 15-year-old son Samori. It's a beautiful portrait of a father's dedication to his son, as Coates recounts his experiences coming of age in the inner city of Baltimore and his growing fear of daily violence against the Black community. Between the World and Me won the 2015 National Book Award for Nonfiction, was a finalist for the 2016 Pulitzer Prize for General Non-Fiction, and has become essential reading during the Black Lives Matter movement.

In 2018, an adapted stage production of the book was put on at the famous Apollo Theater in Harlem, New York City, and featured a number of actors and activists reciting Coates' text in a live reading. Now, a film version of Between the World and Me combines elements of the Apollo stage production and new visuals, actors, and activists.

Directed by Apollo Theater Executive Producer Kamilah Forbes, who also brought the staged version to life, HBO's Between the World and Me includes similar elements from that production, plus documentary footage of Coates' home life, archival footage, animation, and powerful performances by some of today's most prominent Black actors and activists narrating words directly from the book.

So who's in the cast?

Viewers will most likely recognize Mahershala Ali who has won two Academy Awards in the past few years. His first was for the actual Best Picture-winning Moonlight, for which he became the first Muslim actor to win an Oscar, and the second was for Green Book.

Ali lovingly recites Coates's descriptions of the women he's fallen in love with over the years. When he describes his son's mother, he says, "I lost my balance and all my boyhood under the spell of a girl from Chicago." Ali's incredibly emotional performance hits a peak when Coates finally learns of a new kind of love: that of being a father.

Angela Bassett might be known to an entire generation of Black Panther fans as T'Challa's mother, but throughout her extensive career, she's acted in films that capture the Black experience. She's starred in John Singleton’s Boyz N the Hood, What’s Love Got to Do With It, Waiting to Exhale, Strange Days, Malcolm X, London Has Fallen, Olympus Has Fallen, and How Stella Got Her Groove Back.

In Bassett's portion of the film, she narrates Coates' discovery of his own Blackness and how it relates to the white, suburban communities that he knew existed around him but had never experienced. "I knew there was this other world that was suburban and endless...I have seen that dream all my life, with perfect houses and perfect lawns...the height of American ambition."

Jharrel Jerome made his big-screen debut in Moonlight and starred as the lead in Ava DuVernay’s four-part Netflix series When They See Us, which chronicled the trial of the Central Park Five. He won the 2019 Emmy for Lead Actor in a Miniseries, the 2020 Critics’ Choice Award for Best Actor in a Limited Series or Movie Made for Television, and the 2020 NAACP Image Award for Outstanding Actor in a Television Movie, Mini-Series or Dramatic Special. His next project is Concrete Cowboys where he'll appear opposite Idris Elba and Caleb McLaughlin.

Jerome delivers the pieces of the book from Coates' experiences growing up in Baltimore’s inner city. "To be Black in the Baltimore of my youth was to be naked before the elements. Before all the guns, fists, and knives, crack, rape, and disease," Jerome recites, embodying Coates' childhood experiences.

Trans rights activist, author, host, and producer Janet Mock serves as a writer, director, and executive producer for the FX series Pose and the Netflix series Hollywood. She's written two memoirs about her life as a trans woman: Redefining Realness in 2014 and Surpassing Certainty in 2017. Last year, Mock signed a multimillion-dollar deal with Netflix, making her the first trans person to secure an overall deal with a major studio, according to Entertainment Weekly.

Mock takes part in a multi-person monologue about being Black in the world and relating to other Black people, even if you're strangers, on a heightened level.

Scandal fans will recognize Joe Morton as Olivia Pope's scheming dad, Eli Pope, a role for which he won an Emmy for Outstanding Guest Actor in a Drama Series. Morton also recently appeared in The Politician, God Friended Me, and Justice League. Morton has been acting for decades, having made his Broadway debut in the original production of Tony Award-winning musical Hair, according to the New York Times. He recently returned to the theater to play comedian Dick Gregory in the one-man show Turn Me Loose off-Broadway and was honored with the NAACP Theatre Lifetime Achievement Award.

Morton opens the film's monologues by addressing the issue of police brutality and the cases of Eric Garner, Michael Brown, and Tamir Rice, among others. "This is your country, this is your world, and this is your body," Morton says reciting Coates' words. "And you must find a way to live within the all of it."

Phylicia Rashad is most well known for her role as Claire Huxtable on The Cosby Show, but like many actors in the Between the World and Me cast, she's had a seriously extensive and impressive acting career. She's such a theater legend that she was inducted into the Theater Hall of Fame. Her most recent film credits include the Creed movies and her upcoming films include the animated Pixar fantasy, Soul, and the Christmas musical, Jingle Jangle.

Rashad plays the mother of Prince Jones, a friend of Coates's from Howard University who was killed by a police officer in 2000.

Tariq "Black Thought" Trotter is the co-founder (along with drummer Questlove) of the hip-hop group The Roots. The American rapper and MC is a two-time Grammy winner and as a member of The Roots is a staple on late-night television as the house band for The Tonight Show Starring Jimmy Fallon. Trotter also served as a co-producer on the Grammy Award-winning Original Broadway Cast Recording of Hamilton. He's set to release the third volume of his “Streams Of Thought” series later this year, according to Pitchfork.

Trotter's narration in the film is brief, but his bigger contribution is musical, working with vocalist Ledisi on the sounds and songs you hear throughout the film.

Courtney B. Vance won Emmy, Critics Choice, and NAACP Image awards for playing Johnnie Cochran in The People vs. OJ Simpson: American Crime Story. He also stars in HBO's recent drama Lovecraft Country and has started filming the third season of NatGeo’s Genius series, in which he will portray Aretha Franklin’s father, C.L. Franklin, according to Deadline.

Vance's monologue details Coates' experiences of living in New York City during the September 11, 2001 terror attacks. He revisits a bit of New York history and how lower Manhattan once had a slave market and a burial ground. "Bin Laden was not the first man to bring terror to that section of the city," he says, eerily. "I never forgot that neither should you."

Fans of NBC's hit drama This Is Us know Susan Kelechi Watson as Beth Pearson, Randall's (Sterling K. Brown) wife and the glue that consistently holds the family together. In addition to acting in TV and films like It's a Beautiful Day in the Neighborhood, Watson is also an accomplished producer, having Executive Produced Rashaad Ernesto Green’s film Premature, and Between the World and Me.

In Between the World and Me, Watson embodies and narrates Coates' experiences as a student at Howard University. Her movement is a celebration of the school's diversity of ethnicities, nationalities, religions, and cultures within the Black diaspora.

Does Oprah Winfrey really need any introduction? In Between the World and Me, she performs a section titled, "It had to be blood, a folklore," more of a lyrical spoken word poem than a monologue, accompanied by art and animation.

More like this
At 14, Myha'la Herrold Was Singing In Her School’s Christian Rock Band
By Samantha Leach
How Angelica Ross Plans To Make Roxie Hart Feel “Universal”
By Jessica Derschowitz
This House of the Dragon Character Will Create Another Scandal For Rhaenyra
By Kadin Burnett
'House of The Dragon' Episode 6 Will Take Place A Decade After Episode 5
By Kadin Burnett
Get Even More From Bustle — Sign Up For The Newsletter