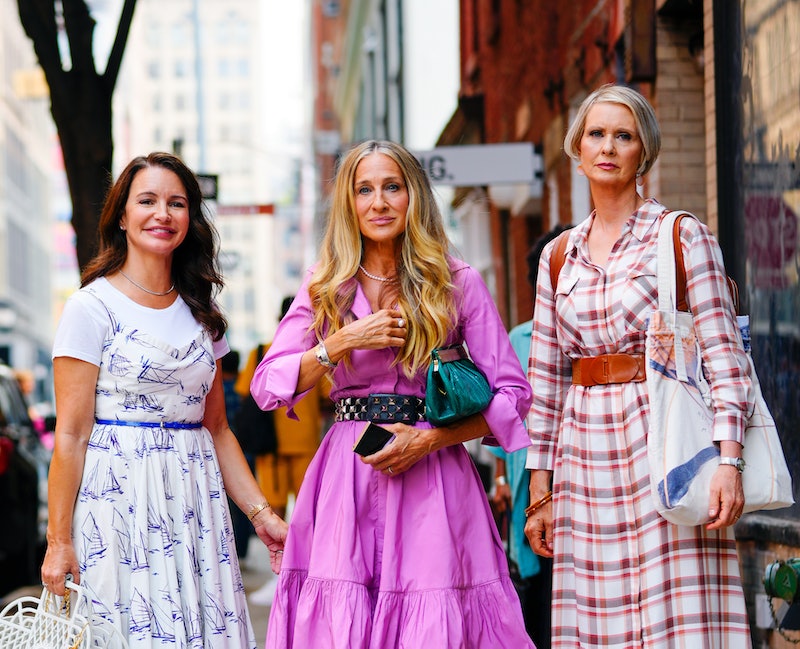 HBO Max’s Sex and the City reboot series, And Just Like That..., has been a hot topic of discussion since its December 2021 premiere for many reasons — not all of which are positive. Between Kim Cattrall’s adamant refusal to appear as Samantha Jones, Mr. Big’s bombshell heart attack and passing, Chris Noth’s subsequent sexual assault allegations, Stanford Blatch actor Willie Garson’s heartbreaking mid-production death, and the mere existence of stoner comedian Che Diaz (Sara Ramirez), both the Darren Star-created dramedy’s script and accompanying press cycle have gone in unpredictable directions. Despite receiving mixed to negative reviews from critics and audiences alike, the premiere episode of And Just Like That reportedly became HBO Max’s most-viewed series debut to date.

Though originally announced as a miniseries, And Just Like That will return for Season 2, as HBO Max announced on March 22. A January Page Six report first hinted at this confirmation, with a source claiming, “The creative conversations haven’t happened yet, but everyone is feeling good about the show.” Another knowledgeable insider added: “They may feel that they want to prove a point that they can make a second season stronger and that it was valid to bring it back for fans.” According to a third source, “It’s an expensive show to make, and HBO Max will have to look at how many subscribers it brought in — and how many subscribers actually stayed watching the show each week.”

In December 2021, HBO and HBO Max chief content officer Casey Bloys spoke to Vulture about the possibility of another season. “To tell you the truth, it would be a conversation, because I have no idea. They kind of came together to do this. They were all really busy and doing other things. So it is certainly a conversation we’ll have — for sure. But we haven’t decided anything or done anything,” he said, claiming the decision rests on actor Sarah Jessica Parker and showrunner Michael Patrick King’s shoulders. “I’m going to leave it up to these guys to figure out what they want to do, but I’m very happy with what they’ve done. I will tell you, it’s kind of what you want in a show like this. It really does feel like you’re picking up with old friends and haven’t missed a beat.”

In the March 22 press release confirmation, King stated, “I am delighted and excited to tell more stories about these vibrant, bold characters - played by these powerful, amazing actors. The fact is, we’re all thrilled. And Just like That… our Sex life is back.”

Here’s everything you need to know about Season 2 of And Just Like That, including its plot, cast, trailer, and release date.

Considering Carrie Bradshaw (Parker), Charlotte York (Kristin Davis), and Miranda Hobbes (Cynthia Nixon) already lost one friend between Sex and the City and And Just Like That, it’s hard to imagine HBO Max would greenlight another season without the three main actors returning to their starring roles. Fans can continue hoping for Cattrall to reprise her beloved role as Samantha all they want, but it seems even the writers’ clear pleas to entice her to come back aren’t working. Since the series’ premiere, the How I Met Your Father actor reportedly liked a tweet referring to the Sex and the City reboot as “trashy.”

Despite his character dying in Season 1’s premiere episode, Noth was reportedly set to appear as Mr. Big one last time through a flashback in the season finale. But after several women publicly accused him of sexual assault, which he’s denied, Noth’s cameo was scrapped and reshot, so don’t expect the disgraced actor back on And Just Like That anytime soon. Carrie’s longtime confidante Stanford Blatch was also written out of Season 1 following actor Garson’s September 2021 death due to worsening pancreatic cancer, so unfortunately you won’t see his glasses-wearing, smiling face either.

With Miranda skipping town to join Che in California, her marriage to Steve Brady is essentially over, so it’s unclear if viewers will see David Eigenberg reprise his lovable character.

On August 19, Deadline reported that John Corbett would be returning to the SATC universe for the reboot’s second season as Carrie’s former flame Aidan Shaw. He was previously expected to appear in And Just Like That... Season 1, telling Page Six in April 2021, “I think I might be in quite a few [episodes].” He ultimately did not, upsetting fans. The reboot’s executive producer Julie Rottenberg said that he should apologize to fans for “overpromising his return.” According to Deadline, Corbett was “tapped for a substantial, multi-episode arc on the second season,” so here’s hoping for more Aidan.

Che Diaz (Ramirez) will also be back, according to a Sept. 21 photo from a table read.

It’s unlikely we’ll know any information about And Just Like That Season 2’s trailer and release date for a while, but we do have some clues. Season 1 entered production in June 2021 and completed filming on Dec. 6 of the same year — aka, three days before its first two episodes were released. If Season 2 follows a similar six-month production schedule, fans can likely expect to see the new season of And Just Like That in or around March 2023.

More like this
The First Trailer For 'That '90s Show' Includes So Many Nods To The Original Series
By Jack Irvin, Alyssa Lapid and Grace Wehniainen
The 'Kenan & Kel' Reunion On 'SNL' Took A Dramatic Turn, Thanks To Keke Palmer
By Brad Witter
'Bridgerton' S3 Teases Exciting Social Season For Penelope Featherington
By Bustle
The ‘Emily In Paris’ Season 3 Trailer Teases Major Career & Love Crossroads For Emily
By Bustle Staff
Get Even More From Bustle — Sign Up For The Newsletter

This article was originally published on Jan. 25, 2022