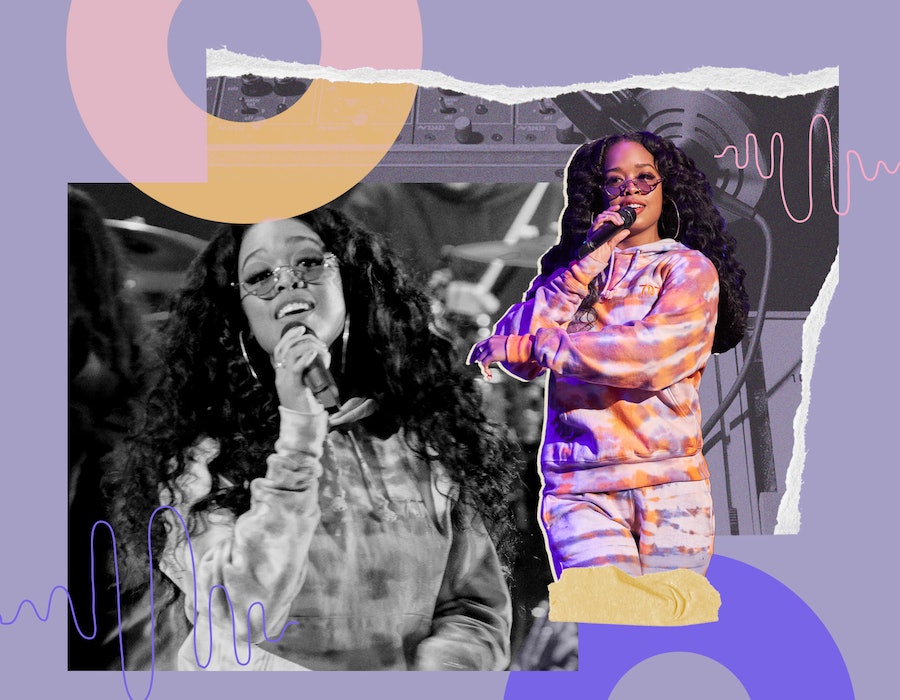 H.E.R. wants to make one thing clear: she is not a music snob. “Music snobbery is for people who pay attention more so to the quality of music as opposed to the feeling of music,” the musician born Gabriella Sarmiento Wilson tells Bustle. It’s no surprise then that the four-time Grammy winner’s playlist captures every mood, from songs that make you want to dance and cry to songs that make you want to fall in love.

For the R&B sensation, music resonates most when it draws from real life. “A song that I wrote for one of my earlier EPs was about this dude who was being way too thirsty and pushy, so I ended up writing about him and he didn't know,” Wilson says with a laugh. Then there are the songs that strike the right chord at the right time, like "I Can't Breathe,” which practically wrote itself over a FaceTime conversation with co-writer Tiara Thomas following George Floyd’s death last summer. “Even through the pandemic, I was still able to use music as a creative outlet and make a little difference. I didn't realize its impact on people,” she says about the track, which won Song of the Year at the 2021 Grammys.

After performing “America the Beautiful” at the Super Bowl and taking home two Grammys, 2021 is proving to be H.E.R.’s most exciting year yet. Between finishing up new music and planning the long-awaited return of the Lights On Festival, the singer-songwriter also recently made her acting debut in Netflix’s Yes Day, which stars Jennifer Garner and Edgar Ramirez as parents who decide they must say yes to all of their children’s requests for one day. H.E.R. pops up in a cameo appearance that also shows off her musical chops in an impromptu performance of “Baby I Need Your Loving.”

"I think I’m gonna start doing yes days like once a year," Wilson says. On her yes list? Experimenting with Latin music, hitting shuffle on her music playlists, and writing songs in her bedroom. But the song she wishes she didn’t have to perform again? “People will probably hate me for this, but I'd be OK if I didn't have to sing 'Focus' anymore,” she admits.

Below, H.E.R. talks about her love of D’Angelo, funny memories behind the “Slide” remix, and the performance she’ll never forget.

On Karaoke & The Instrument She Wishes She Played

“Greatest Love Of All” by Whitney Houston. I grew up in a Filipino family and it’s always like, “Sing a Whitney Houston song,” so that was kind of my go-to as a kid.

You can play five instruments, but what’s an instrument you don’t play that you wish you did?

I wish I played the harp.

What's the first CD you ever bought?

I don’t remember the first CD, but my favorite one that I think I went to the record store to buy is The Renaissance by Q-Tip. The cover art alone was so cool, but the beats, the lyrical content, and how much fun the music was made me feel something different than what most rappers were doing.

Listen, my funeral is going to be a celebration of my life, so I want something upbeat like “Glamorous Life” by Sheila E. I don’t know why that just came to mind, but at my wedding, I think D’Angelo's “Feel Like Making Love.” I love that song.

What’s a lyric you love?

Stevie Wonder, “If It’s Magic.” The line, “If it's magic, why can’t it be everlasting like the sun that always shines?” is simple but so poetic.

On Her Music Idol & Most Surprising Influences

Do you have a musical idol at the moment?

I have to talk about D’Angelo because I met and performed with him [on Verzuz] recently, and he’s definitely one of my biggest inspirations. I probably listen to his entire album like once a week — the live version of “Brown Sugar” is one of my favorites.

Probably Black Sabbath or Soundgarden, two groups that I love. I don’t think people would expect me to like bands like that or Metallica and ACDC, but I’m a rock guitar player, so it shouldn’t come as a big surprise.

Does it annoy you when people dissect your lyrics?

No! I love when people dissect my lyrics. I have a personal connection to every word and every lyric, so when somebody else does or they’re trying to understand them, I really do love it.

Before [the late] Pop Smoke hopped on the “Slide” remix, he thought I was talking about something completely different. His lyrics were very vulgar at first, and I had to tell him that’s not what I’m talking about, but his verse ended up really dope.

On Performing With Alicia Keys & The Pressure To Become Successful

Is there anything better than a post-performance high?

I don’t know if anything’s better than that feeling... maybe the moments leading up to the performance. The nerves, the rehearsals, and just the excitement of presenting to the world an experience you've crafted.

Can you describe a moment when you really felt like a musician?

Taking the stage with Alicia Keys at the 2019 Global Citizen Festival in Central Park in front of over 60,000 people. We performed Aerosmith's "Dream On," and we decided to do it only a day or two before the actual show. I was super nervous, but when it was time for my solo, my fingers just went. It almost felt like an out-of-body experience.

What's a moment when you felt ready to give up on musician life, and what got you through it?

After high school, I was signed to [RCA Records]. People think as soon as you get signed, you’re supposed to make it big right away and that’s just not how that works, so I was getting pressure from my family like, “Are you gonna go to college?” But I made the decision to do music 100 percent. I was in New York just grinding it out in the studio every single day, just knowing that nothing else is meant for me other than music.

What do the Grammys represent to you?

More like this
Craig David Is Still Slicker Than Your Average
By Olivia-Anne Cleary
'School Of Rock' Changed Joe Keery's Life Forever
By Alyssa Lapid
Even If She Tried, Beth Ditto Couldn’t Stay Away From Music
By Ivana Rihter
Jinkx Monsoon Is About To Get Real Sketchy
By Sam Ramsden
Get Even More From Bustle — Sign Up For The Newsletter