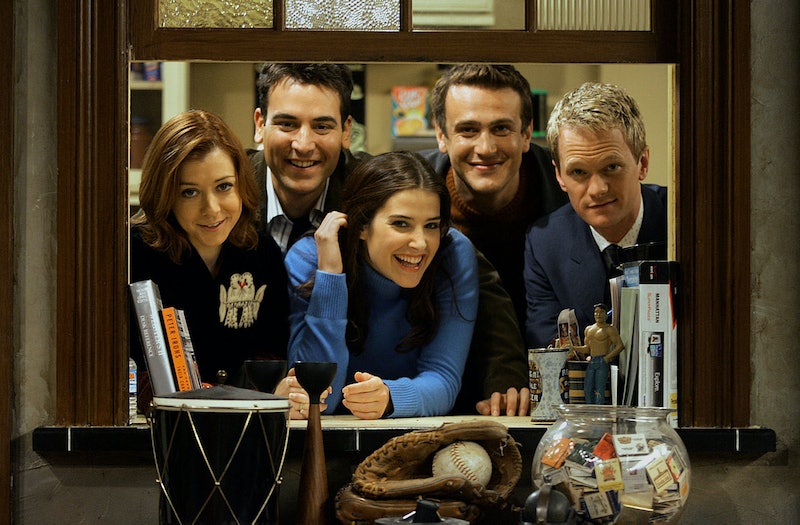 2005 was a golden year for TV. Hit shows like Grey’s Anatomy, Supernatural, The Office, and It’s Always Sunny in Philadelphia all premiered within that year and later achieved pop culture success. How I Met Your Mother did the same, making new stars out of actors Josh Radnor and Cobie Smulders, while breathing new life into the careers of already established stars such as Alyson Hannigan (Buffy the Vampire Slayer), Neil Patrick Harris (Doogie Howser, M.D.), and Jason Segel (Freaks and Geeks).

The TV sitcom may have centered events leading up to how Radnor’s character, Ted Mosby, met his children’s mother, but audiences also fell in love with the relationships between Ted and his best friends Robin (Smulders), Lily (Hannigan), Marshall (Segel), and Barney (Patrick Harris) and the hilarious moments they shared. Who can forget Marshall’s “Slapsgiving” song or the “Talk Like a Little Boy” challenge? Yet, for all the HIMYM gang’s memorable moments during the show’s original 2005-2014 run, there were a number of jokes that not even a laugh track could save today.

The quips, ranging from rampant slut-shaming to transphobia and homophobia, are so bad in hindsight that even co-creator Carter Bays tweeted in June that he would “love to go into an edit room and go George Lucas on this thing and remove certain stuff.” If it were up to him, that stuff wouldn’t be in there anymore, and he doesn’t think anybody would miss it.

Here are some of the most triggering jokes from How I Met Your Mother.

How I Met Your Mother undoubtedly made a lot of people laugh and still does to this day. But since the original airing of the sitcom, there are some jokes that just haven’t aged well, including the ones in which Robin is slut-shamed. The “Naked Man” episode is a prime example of this.

In the episode, Barney called a random naked man (“Mitch”), seen sitting on a couch in Robin and Ted’s apartment, “Superman” for simply taking his clothes off to get Robin to have sex with him. This sounds problematic enough, given that Barney thought the man’s ploy made him a hero. Making matters worse, though, was the gang’s reaction to Robin having had sex with Mitch without getting to know him. Marshall promptly called her a slut, telling her the only good reason to sleep with someone is love.

A player with an actual playbook, Barney Stinson was the Casanova of the HIMYM crew. The character’s sexual shenanigans were discussed in many episodes, but a slew of them remain questionable. Barney’s entire playbook itself was rife with different dishonest strategies he used to get women to sleep with him. The “Mrs. Stinsfire,” for example, involved Barney dressing up as the fictional Mrs. Doubtfire movie character in order to pick up college girls at a sorority. Another was “The Cheap Trick,” in which he falsely portrayed himself as the bass player of the famous rock band Cheap Trick. Barney’s dating ploys may have been a treat for him, but the tricks themselves were manipulative. The lines of consent were also blurred as Barney’s one-night stands appeared as a “sure thing”... because the women were drunk.

Unfortunately, there were plenty of transphobic and homophobic jokes made in How I Met Your Mother. The “Who’s hot and who’s Scott” “game” between Ted and Barney was a terrible proposition in which Ted asked Barney if he wanted to find the rumored transgender woman among a bunch of models. There was also the instance when Barney decided to dress up in what he thought was stereotypical lesbian fashion in order to have sex with a queer woman as another successful conquest. Today, the myriad transphobic and homophobic jokes have become a topic of discussion, with HIMYM on the Los Angeles Times’ list of CBS comedies to avoid, due to its display of transphobic (un)funny business.

The Joke’s On Patrice

The subject of weight is more often than not a delicate one, but How I Met Your Mother showed a particular dislike for overweight women. One of the most consistent gags of the series was Robin’s constant screaming at her overweight co-worker, Patrice. Though Robin called her a friend, anyone who watched the show was encouraged to get a kick out of Patrice’s embarrassment. Whether she just asked a question or gave a smile and wave, Patrice would still become the object of Robin’s uncalled-for rage. Would Robin have yelled at Patrice if she weren’t overweight? We don’t really know, but it’s apparent that Patrice didn’t deserve Robin’s fury and it showed that an overweight character was nothing more than an unwelcome nuisance.

More like this
A New 'And Just Like That' Table Read Pic Confirms A Key Character's Return
By Jack Irvin and Grace Wehniainen
Netflix Reveals First Look At Wednesday In The 'Addams Family' Spinoff Series
By Bustle Editors
The First 'Percy Jackson & The Olympians' Teaser Comes With An Ominous Warning
By Grace Wehniainen
'The Lord of the Rings: The Rings of Power' Revisits Iconic Spots From 'The Hobbit'
By Darshita Goyal
Get Even More From Bustle — Sign Up For The Newsletter