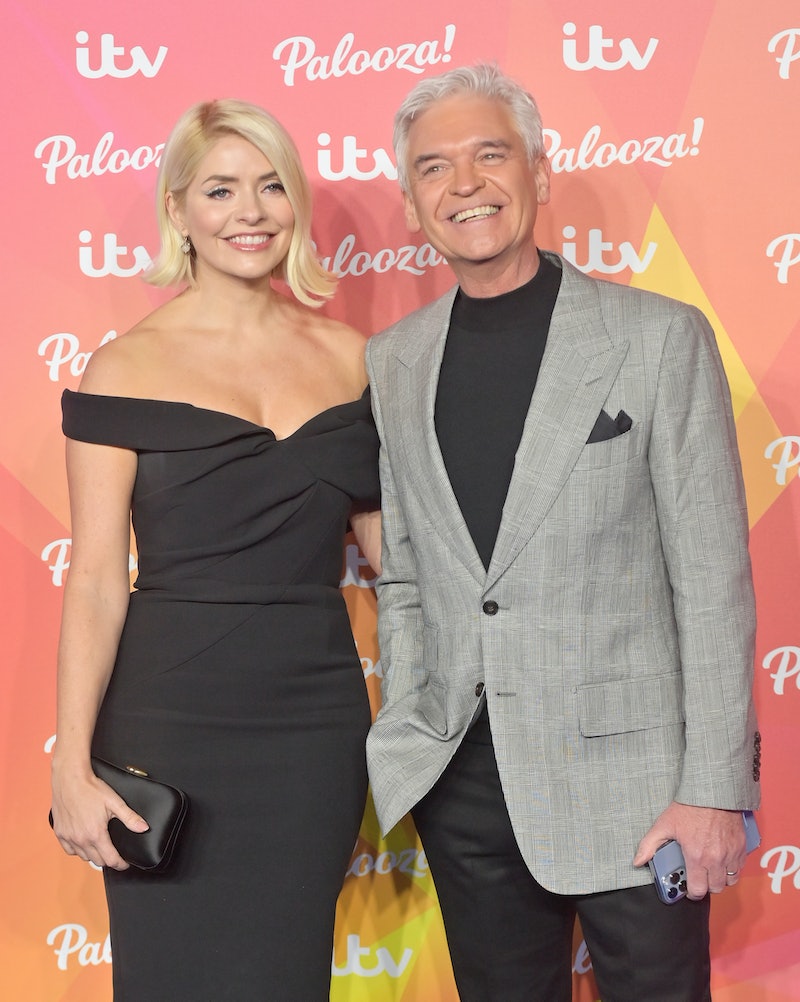 An estimated 250,000 people paid their respects to Queen Elizabeth II for four and a half days during September, as she lay-in-state at Westminster Hall. Among them were some notable faces, including David Beckham, Tilda Swinton, and Good Morning Britain host Susanna Reid. This Morning’s Holly Willoughby and Phillip Schofield were also in attendance but caused quite the stir when they were spotted allegedly jumping the queue.

Twitter quickly caught wind of the drama, dubbing it #Queuegate, as ITV issued a statement explaining that the duo were there in a journalistic capacity to cover the event for a segment on This Morning. However, that didn’t stop the public from criticising the presenters, with nearly 80,000 people signing a petition to axe Willoughby and Schofield from television altogether.

If you’ve somehow managed to stay out of the loop or are confused about how this drama escalated so quickly, here’s the #Queuegate drama explained.

On Sept. 16, Willoughby and Schofield were spotted in a separate queue for press members in Westminster Hall per the Express, which led them to a press gallery to view the Queen’s coffin. Twitter was quick to notice, with many criticising the presenters for what looked like queue jumping. “David Beckham in the queue for over 10 hours paying his respects to The Queen while Holly and Phil saunter in, skipping the line is a terrible look,” journalist Joe Michalczuk tweeted.

Despite having press accreditations to be in the queue, The Mail on Sunday alleged their names weren’t on the list, which caused “a bit of a hoo-ha,” according to a source. In response, ITV said that “while it was absolutely clear at the time of booking that Phillip and Holly would be attending to report for This Morning, we would never share personal contact details for any of our onscreen talent and so the email addressed of the production members… were instead given.”

How Did The Public React?

Not very well. The ordeal garnered outrage on social media — especially regarding British queue etiquette — resulting in #Queuegate trending on Twitter. Celebrities, including former This Morning presenters Eamonn Holmes and Fern Britton, criticised the pair, as did Huw Edwards during his coverage of the Queen’s death for the BBC.

Outside social media, some nightclubs in the UK let people called Holly or Phil jump queues. The London Dungeons jokingly issued a “Holly & Phil” queue jump pass, writing in a press release that “guests will have immediate access to the next tour of the London Dungeon, jostling past those peasants who have been patiently waiting their turn.” One of ITV’s main sponsors even joked about the situation, with Domino’s Pizza tweeting: “Apologies to anyone waiting on their pizza, we’ve just received an order from Holly and Phil.”

A Change.org petition to have Willoughby and Schofield removed from television in general has received nearly 80,000 signatures. However, the person who created the petition is now regretting doing so. In an update posted to the petition, Laura Harrison wrote about how she doesn’t “want to think about the programme anymore” and that the drama was “destroying” her. “Words will be twisted, but the intent was always to prevent people being hurt time and time again by these TV shows,” she wrote.

What Have Holly & Phillip Said?

On Sept. 20, This Morning aired the segment that Willoughby and Schofield filmed at Westminster Hall. As footage played from their time at the venue, Willoughby explained their reasoning for being there in a voice-over. She confirmed that “like hundreds of accredited broadcasters and journalists”, they were “given official permission to access the hall” for “reporting on the event for millions of people… who haven’t been able to visit Westminster in person.”

Willoughby clarified that they were “quickly escorted around the edges of the platform at the back” and that “none of the broadcasters and journalists took anyone’s place in the queue.” However, with hindsight, they “realised that it may have looked like something, and therefore totally understand the reaction. Please know we would never jump the queue.”

What Has ITV Said?

ITV issued a statement before the Sept. 20 episode, clarifying that Willoughby and Schofield were at Westminster Hall in a journalistic capacity.

Speaking at the Royal Television Society London Convention, ITV Chief Executive Dame Carolyn McCall said “they were there to interview people inside and outside” and that they “didn’t displace anyone in the queue.” McCall confirmed that the presenters would not be axed from This Morning and that she felt as though “they’ve been very misrepresented.”