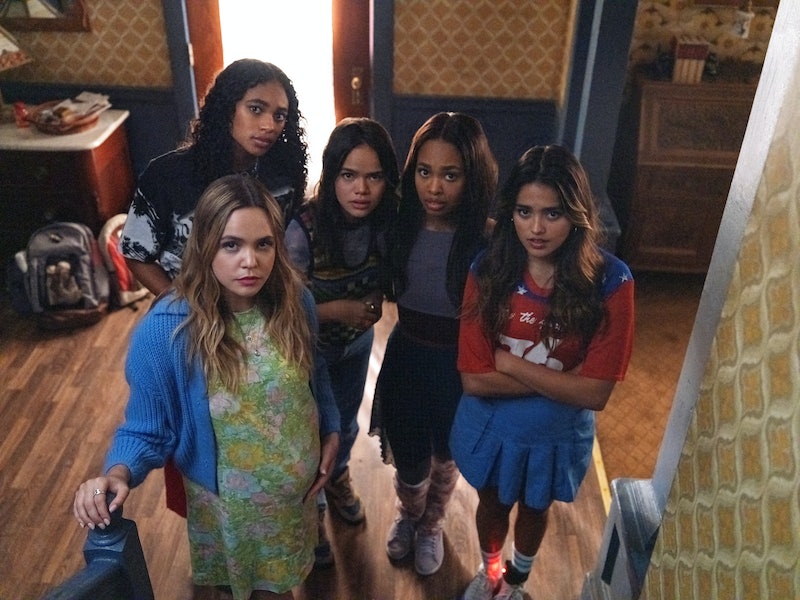 You may have thought you’d seen the last of “A” (and “Uber A”) when Pretty Little Liars wrapped its seven-year run in 2017, but “A” is back. And with an actual vengeance. In the small town of Millwood, Pennsylvania, “A” is terrorizing a new group of women in HBO Max’s remake, Pretty Little Liars: Original Sin. While the original’s mystery “A” leaned more into petty blackmail — and the murder of Alison DiLaurentis was actually a fakeout — the reboot’s masked villain is more violent, murderous, and the stuff of slasher nightmares.

Fans have the show’s creators Roberto Aguirre-Sacasa and Lindsay Calhoon to thank for this horror-forward HBO iteration. The two, who’ve worked together on The Chilling Adventures of Sabrina, were heavily inspired by horror films, particularly of the slasher variety. “We’re huge horror movie fans,” Aguirre-Sacasa tells Bustle. “We love the idea of taking this beloved property that trafficked in mystery, suspense, [and] in female friendship, and had flirted with horror but have never gone full horror.”

The result is a series that references the greats of the genre. “Let’s do a true horror slasher series that paid homage to those movies that we loved,” Aguirre-Sacasa says of their decision to look to the most chilling figures in horror for “A” inspiration. “We love Jason, Michael Myers, Freddie Kruger, Leatherface — all of those masked killers — and then kind of came up with a version of “A” that would be able to stand in a lineup of those other horror icons.”

When the show doesn’t pay homage to classics in recreated scenes or subtler themes, it mentions them through one of the new Liars. Chandler Kinney’s character, Tabby, plays a movie-obsessed budding film director, who works at The Orpheum, Millwood’s local theater. “Film means the world to Tabby. It is her greatest passion,” Kinney tells Bustle, revealing that she had to do a deep dive into the genre to keep up with her on-screen persona. “I did have to watch a lot of horror movies to prepare, and it’s definitely difficult to catch up with Tabby’s knowledge because she is just so well-versed in that world,” Kinney says. When Tabby’s not busy helping her friends, she’s spewing film references left and right.

Here are all the horror movie references in PLL: Original Sin so far.

While no one actually mentions the film on the show, Original Sin’s creators leaned into the payback concept of this 1984 classic. (Though Tabby mentions its director, Wes Craven, as one of the “masters of horror” in a scene at The Orpheum.)

“Original Sin for us really opened the door to this being a multigenerational horror story,” Calhoon tells us. “In the horror genre, there is often a paying for the sins of the parents and those sins being bestowed upon the child. Nightmare on Elm Street is a really good example of that. The parents of Elm Street come together and kill Freddy [Krueger] and Freddy returns and kills the children of those parents and their dreams.”

While on Elm Street, Freddy attacks the teens in dreams, in Original Sin “A” is rooted in reality — making him all the more frightening. “We loved embracing this as multigenerational horror but in a grounded, character-driven way. Looking at this being about multigenerational trauma as well between mother and child ... making this about the moms and the daughters.”

When Imogen Adams (Bailee Madison) first spots the masked “A,” she’s sitting in her classroom twirling her pen. If it feels familiar, that’s because it’s inspired by Jamie Lee Curtis’ iconic role in the 1978 slasher film Halloween. (Curtis is reprising her role for the third time in October 2022 for Halloween Ends.) Calhoon says it’s one of the creators’ “favorite” scenes in the pilot.

“I love any homage to John Carpenter,” Calhoon tells us. “One of Roberto’s and my favorite moments in the pilot is Imogen sitting in class iconically playing with a red pen the same way that Jamie Lee Curtis played with a red pen, looking out the window and seeing her Michael Myers which is ‘A.’ That was a really fun one to be on set for I think to see something that you’re such a fan of.” Aguirre-Sacasa adds, “The first version of that scene was eight minutes long. Now it’s down to like 16 seconds.” Calhoon confirms, adding, “It was an aria about The Scarlet Letter. You heard it here first.”

Speaking of Nathaniel Hawthorne’s 1850’s novel, there are several references to the classic about a woman shamed by society for adultery. So while it’s not exactly horror, it could pass as a messed-up thriller. In the pilot, the class is discussing the book when Imogen first sees “A.” And in Episode 3, Imogen finds the book in the memorial for Angela, alluding to its significance. Plus, the whole idea of a scarlet A? That’s definitely a Hawthorne-inspired way of guilting someone. (And for hardcore PLL fans, it’s also an Easter Egg. The original Liars also run into the novel throughout the original series.)

As Tabby and Imogen walk into Millwood High on Imogen’s first day back at school, Tabby says “Abandon hope all ye who enter here,” referencing Dante Alighieri’s first line from Inferno, the first installment in his Divine Comedy trilogy. While it’s technically not horror, the novel-turned-film is a romp through the depths of hell. So, it’s still spooky. The 14th-century poet’s line has been borrowed in several films too, including Hellraiser, which definitely belongs to the genre. Episode 3 features another Inferno quote. When Imogen and Tabby go to the warehouse where Angela Waters died, an abandoned car is spray-painted “Abandon Hope All Ye Who Enter Here.”

Jordan Peele’s works get massive shoutouts in the first two episodes of Original Sin. Aside from Tabby advocating for “diverse contemporary filmmakers” in her film class, she decides to screen a double feature at The Orpheum of the director’s psychological thrillers Get Out and Us. In Episode 2, fans even get to see the beginning of Get Out after the Liars release Karen’s special short film.

Tabby and her boss Wes (Derek Klena), also a movie buff, get into a ton of horror film arguments — including which has the best scenes. “The stocking sequence in Dressed To Kill is a tour de force,” Wes argues for Brian De Palma’s 1980 erotic thriller. Tabby quickly retorts, “Yeah, but is it better than the shower scene in Psycho? Not to mention Dressed To Kill sexualizes all the killers’ victims before they’re slashed to death with a straight razor.” She could be referring to the scene with Anne Heche in Gus Van Sant’s remake or Janet Leigh in Alfred Hitchcock’s ’60s classic.

Psycho becomes part of Tabby’s storyline by Episode 4 when she decides to recreate the shower scene for her film class and flip the male gaze for a contemporary feminist take. In one scene, she gives a monologue about her project in class about how most slasher films take inspiration from Psycho’s iconic scene. As part of the presentation, she also references other slasher films including Scream, Prom Night, Friday the 13th, Halloween, and Black Christmas.

When Wes offers to drive Tabby home, he stops the car somewhere to tell her how special she is. He’s interrupted when Tabby spots “A” watching them. Just as Wes is about to go down to confront the masked man (why?!), Tabby makes a movie reference that stops him in his tracks. “Wes. Fincher. Zodiac.” While Zodiac also prompts good thoughts (namely, Mark Ruffalo, Robert Downey Jr., and Jake Gyllenhaal, among others), David Fincher’s Zodiac is also a retelling of the real-life serial killer who terrorized San Francisco. At least Wes, who’s also a horror movie buff, got the reference and drove off.

In that same car ride, Tabby and Wes talk about director Ari Aster. While Wes isn’t a fan of the young director, Tabby defends his works. “Don’t hate on Ari Aster. Midsommar is flawed but Hereditary is a masterpiece,” she tells Wes.

Tabby tends to spew out horror references whenever, wherever. Oh, and she tends to do it in pairs. When the Liars went back to Imogen’s house, aka the house where she found her mom dead in the bathtub, the girls were spooked being in there. Of course, Tabby made references to ghastly classics — the 1979 haunted house novel-turned-film The Amityville Horror and the 1982 film Poltergeist. She even said the moment was giving “serious Poltergeist vibes.” Agreed.

One scene pops to mind at any mention of Carrie: the blood-soaked prom queen on stage (Sissy Spacek from the original or Chloë Grace Moretz in the most recent revival). After the Liars show Karen Beasley’s (Mallory Bechtel) “humiliating” tape, Karen and her twin, Kelly, try to get back at Imogen by ensuring she wins Spirit Queen so they can pull a Carrie. Unfortunately, “A” intervenes before Karen spills the paint bucket all over Imogen, leading to a different kind of splatter.

It makes sense that Carrie made its way to Original Sin, especially since Aguirre-Sacasa wrote the 2017 revival starring Moretz. Speaking about her co-creator, Calhoon reveals, “Roberto is a huge Carrie fan and Carrie writer himself.”

When Tabby’s upset in Episode 4, Chip tries to console her by offering to watch Evil Dead, a horror film franchise by director Sam Raimi. But Tabby knocks the idea, referencing a huge problem she finds in old horror films in general – the male gaze sexualizing women. “That scene in the woods where they basically raped that one girl ruins the movie for me,” she retorts.

In Episode 3, fans get to see more of Tabby’s room decorated with a lot of movie posters. The one directly framing her bed is a poster of Suspiria, Dario Argento’s 1977 dance horror film. While that’s the only reference to the movie for now, Faran’s (Zaria) ballet arc may take inspiration from the creepy dance movie in the future.

This article was originally published on July 28, 2022