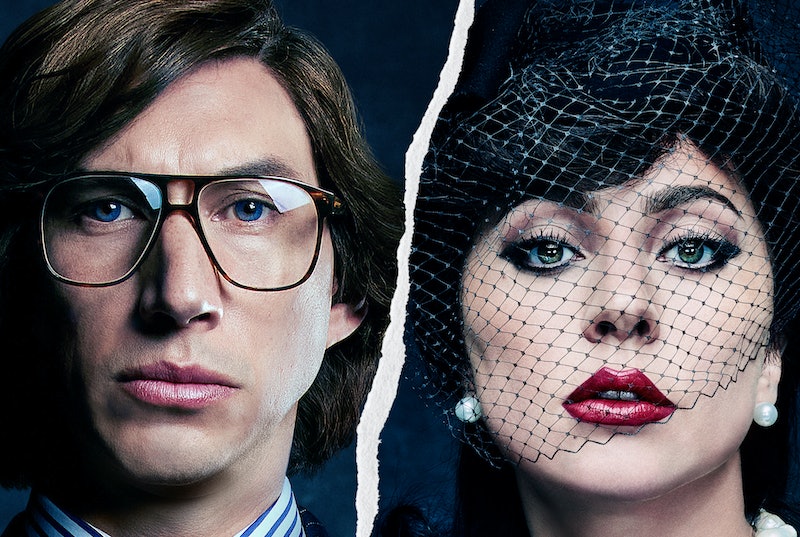 Every once in a blue moon, a movie or TV show’s first look photo feels like something we can project all of our thoughts and dreams onto. It’s deeper than Kristen Stewart channeling Princess Diana or a glimpse at the latest Marvel attraction. The latest images to inspire memes, analysis, and a renewed craving for knitwear are those of Lady Gaga and Adam Driver in House of Gucci. On Tuesday, March 9, the Oscar winner shared a first tease of herself and Driver as Patrizia Reggiani and Maurizio Gucci.

“Signore e Signora Gucci #HouseOfGucci,” Gaga wrote alongside a photo of the pair in chic winterwear. She sports a monochromatic black look, complete with gold jewelry and a furry white hat. Meanwhile, Driver wears a cream-colored cable-knit turtleneck, ski jacket tied around his waist, and aviator glasses. They play husband and wife in Ridley Scott’s upcoming biopic, which depicts the downfall of the Gucci family dynasty. Driver plays the grandson of the fashion house’s founder, Guccio. Gaga portrays Maurizio’s ex-wife, who was convicted of planning her husband’s 1998 murder after alleged infidelity.

After she posted the photo, Driver’s chunky knit was quickly compared to Chris Evans’ in Knives Out and Billy Crystal’s in When Harry Met Sally. (Okay, which studio will do everyone a favor and make a documentary about sweaters through cinematic history??) It also undoubtedly made House of Gucci one of the most anticipated movies of 2021.

In honor of Gaga and Driver’s buzzy photo, here’s everything we know about their new movie, including the cast posters released in July.

Who is in the House of Gucci cast?

Although Gaga and Driver lend more than enough star power to a movie, a slew of A-listers will join them. Deadline reported last August that Oscar winners Jared Leto, Al Pacino, and Robert De Niro were in talks to join House of Gucci in addition to Jack Huston (Boardwalk Empire) and Reeve Carney (Broadway’s Hadestown). At some point in the development process, it appears that De Niro dropped out and was replaced by fellow Academy Award winner Jeremy Irons, as reported last December. He’ll play Maurizio’s father, Rodolfo Gucci.

On July 29, MGM released the House of Gucci character posters, and cinephiles are in for a treat.

Last but certainly not least is Leto’s jaw-dropping transformation, which is causing quite the stir on Twitter.

What is House of Gucci about?

House of Gucci tells the wild true story of Maurizio Gucci’s assassination, as explored in Sara Gay Forden’s novel, House of Gucci: A Sensational Story of Murder, Madness, Glamour, and Greed. Guccio Gucci's grandson (and presumed heir to the fashion house) was killed outside of his office in Italy in March 1995. Reggiani, Maurizio’s ex-wife, was tried and convicted for facilitating his murder after he left her for a younger woman. Known as “Black Widow” during her trial, Reggiani was released in October 2016 after serving 18 years. The film is written by Becky Johnston and Roberto Bentivegna and produced by Ridley, Kevin Walsh, Mark Huffam, and Giannina Scott, Ridley’s partner.

When will House of Gucci and its trailer be released?

Work on the movie was well underway this spring, with paparazzi spotting Gaga and Driver filming across Italy.

Filming ultimately wrapped in May, and House of Gucci (and all of its enviable ski fashion) is set to hit theaters on Nov. 24, 2021.

Hours after the character posters stunned the internet, MGM released the House of Gucci trailer. Set to “House Of Glass,” the clip teased a “curse,” murder, and featured Lady Gaga acting and saying things like, “It’s time to take out the trash,” “I don’t consider myself to be a particularly ethical person, but I am fair,” and “Father, Son, and House of Gucci.”

A new trailer debuted on Oct. 28, providing a closer look at the assassination House of Gucci revolves around. At one moment, Gaga’s Patrizia — decidedly dressed down — meets with a group of men and asks “who does what,” before tossing one a duffel bag (presumably full of cash) and warning him, “don’t miss.”

More like this
Everything You Need To Know About ‘Black Panther: Wakanda Forever’
By Bustle Editors
Harry Styles’ Red Carpet Looks Have One Thing In Common
By El Hunt
KiKi Layne & Ari'el Stachel Call Out 'Don't Worry Darling' Over Cut Scenes
By Sam Ramsden
Lindsay Lohan & Jonathan Bennett Celebrated Mean Girls Day Very Differently
By Jake Viswanath
Get Even More From Bustle — Sign Up For The Newsletter

This article was originally published on March 10, 2021