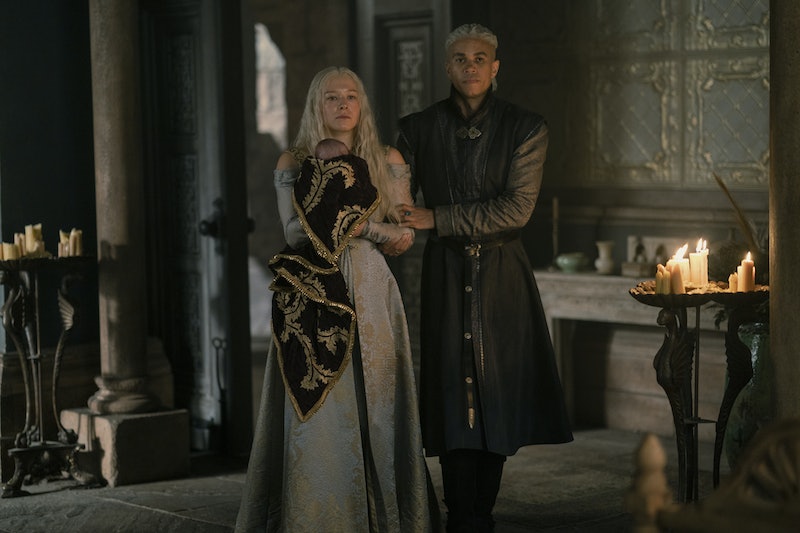 House of the Dragon is going to look a lot different from here on out. Episode 6 will show a world in flux, especially now that Rhaenyra is married to Laenor Velaryon. But just as two great houses connected, Queen Alicent did her very best to distance herself from the Targaryens. However, no royal is in more dire straits than King Viserys, whose health is rapidly declining, meaning the throne will soon be vacated. Episode 6 will catch up with its characters after a 10-year time jump, which means the prominent roles of Alicent and Rhaenyra will switch from Emily Carey and Milly Alcock to Olivia Cooke and Emma D’Arcy.

With a new political landscape and character dynamics, here is what you can expect from House of the Dragon Episode 6, including its release information, plot, and trailer.

House of the Dragon will air on Sunday, Sept. 25 on HBO. The upcoming episode will make its debut at 9:00 p.m. ET. You can stream Episode 6 on HBO Max at the same time, which means that west coast viewers will have access to the episode as early as 6:00 p.m. PT. HBO’s schedule also includes a re-airing of Episode 5 at 7:50 p.m ET, if audiences need a recap.

House Of The Dragon Episode 6 Trailer

The Episode 6 trailer features the massive time jump between episodes. King Viserys' (Paddy Considine) health is withering, while Rhaenyra (Emma D’Arcy) and Alicent (Olivia Cooke) exchange barbs in the small council. There are also a lot more children running around, as several future heirs from Alicent and Viserys, and Rhaenyra and allegedly Ser Harwin (Ryan Corr) have reached their teenage years.

House of the Dragon has crossed the halfway mark in its first season. After Episode 6 reaches the air, there’ll be just four episodes left in the Game of Thrones spin-off. Thus far, every episode has premiered on subsequent Sundays, and should the series follow that schedule, the remaining release dates should be as follows:

House Of The Dragon Episode 6 Title

Episode 6 sports the most straightforward title of the season, simply titled “The Princess and The Queen.” With Alicent and Rhaenyra’s relationship in ruin, not to mention 10 years of estranged living, expect Episode 6 to hinge on what’s left of the relationship between the former friends.

House Of The Dragon Episode 6 Runtime

Fans got about an hour in Westeros last week, despite the jam-packed episode. Episode 6 will return to a slightly longer runtime, clocking in at 67 minutes.

House Of The Dragon Episode 6 Plot

Everyone will likely be talking about the time jump when it comes to Episode 6, but there’s more at play than just different actors. With the king inching closer to the grave, Alicent and Rhaenyra will be politicking and scheming like never before to ensure that their bloodlines are bound for the soon-to-be-empty Iron Throne.

However, the trailer finds Rhaenyra embroiled in even more scandal due to the look of her heirs. Many will remember her and Laenor (Theo Nate) making a pact with one another before their wedding day. Their deal ensured that they could continue to sleep with whomever they please, given their disinterest in sleeping with each other. It may appear that not only has Rhaenyra continued to sleep with who she pleases, but her decision to carry on a relationship with Ser Harwin has culminated in three heirs, none of whom bare any resemblance to Laenor.

Lastly, though he didn’t feature heavily in the trailer, the king’s council may be looking for Daemon (Matt Smith), considering that a discussion over his whereabouts is what sparked our first look at the conflict between Alicent and Rhaenyra.