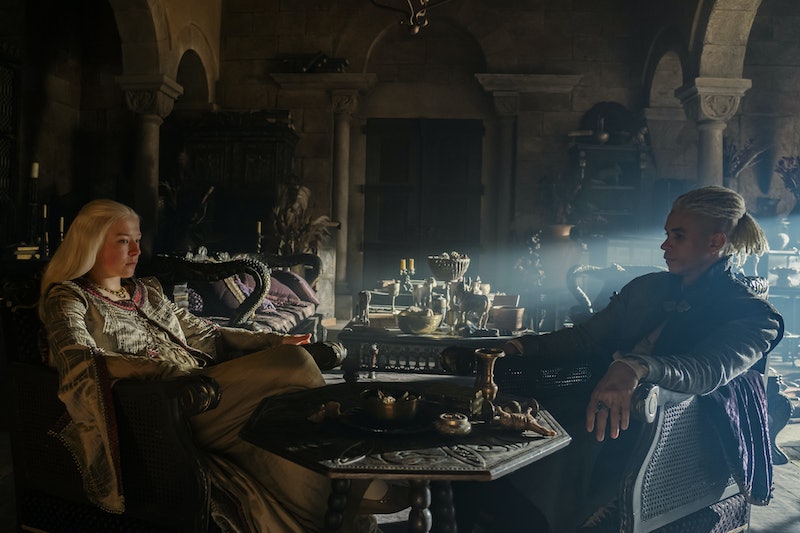 House of the Dragon is getting closer to the finish line — at least for Season 1. After the 10-year time jump in Episode 6, the political landscape of Westeros has completely shifted, and Rhaenyra (Emma D’Arcy) and Alicent (Olivia Cooke) have never been more at odds. Their bickering and slander are already seeing casualties start to stack up. If it wasn’t becoming clear already, their decade of rivalry is finally getting out of hand.

With new feuds and some returning characters, here is what you can expect from House of the Dragon Episode 7, including its release date and time, plot, and trailer.

House of the Dragon Episode 7 premieres on Sunday, Oct. 2. Audiences will be able to watch the episode on HBO and HBO Max at 9:00 p.m. ET (or 6:00 p.m. PT for west coast viewers). HBO is also scheduled to broadcast Episode 6 at 7:41 p.m ET if folks need a recap before the new chapter airs.

House Of The Dragon Episode 7 Trailer

The latest trailer picks up right where Episode 6 left off, as House Velaryon holds a funeral for Laena (Nanna Blondell), sending her to a watery tomb. The teaser also features the queen and the princess’ latest spat, with tempers flaring so much that Alicent publicly pulls a knife on Rhaenyra.

House Of The Dragon Season 1 Schedule

Now that the pivotal sixth episode has made its way to air, we’re officially in the back stretch of the season. House of the Dragon is down to its final four episodes, and should the series continue to release on a weekly basis, the rest of the season should air as follows:

House Of The Dragon Episode 7 Title

Though Alicent and Rhaenyra were at the center of Episode 6, the marriage between Daemon (Matt Smith) and Laena resulted in the fiery death of House Velaryon’s eldest daughter. Her early demise will have consequences, considering Episode 7 is titled, “Driftmark,” which is the seat of House Velaryon. Expect plenty from Corlys (Steve Toussaint) and Rhaenys (Eve Best), who’ll be trying to pick up the pieces following their daughter’s death.

House Of The Dragon Episode 7 Runtime

Episode 6 had one of the longest runtimes of the season, totaling 67 minutes. With so much to cover across the 10-year gap, a little extra time seemed necessary. But Episode 7 will serve as the shortest episode in the series so far, slated for just under an hour at 59 minutes.

House Of The Dragon Episode 7 Plot

Episode 7 will likely revolve around the Velaryons in Driftmark. As we’ve seen in the trailer, viewers will see the funeral for Laena. Her death won’t just have consequences for Rhaenys and Corlys, but also for Daemon, who’s already been embroiled in controversy following the death of his first wife.

Trust in the Targaryens is starting to wane, especially when it comes to the Hightowers. Alicent has long been fed up with the royal family, so much so that her frustrations culminated in Larys Strong (Matthew Needham) burning his brother Harwin (Ryan Corr) and father Lionel (Gavin Spokes) alive. Not only does the event position Larys as a major player in the capital, but it also begets the return of Otto Hightower (Rhys Ifans), as he’ll likely be reinstated as Hand of the King.

Perhaps the most intriguing plotline in Episode 7 will involve a dragon. Vhagar is the largest and oldest dragon in the realm, and as teased in the trailer, someone’s stolen her. The beast used to belong to Laena, but now that she has passed, it appears that someone wants her old dragon.

More like this
This 'White Lotus' Symbol Could Hint At A Major Character's Death
By Grace Wehniainen
'The White Lotus' Costume Designer Explains That Accidental 'Princess Diaries' Moment
By Grace Wehniainen
The 'Love, Lizzo' Harry Styles Scene Is Just 1 Moment That Made Fans Feel Seen
By Brad Witter
Matt Smith Proves He's Daddy Daemon In This Viral 'House Of The Dragon' Video
By Marina Watts
Get Even More From Bustle — Sign Up For The Newsletter