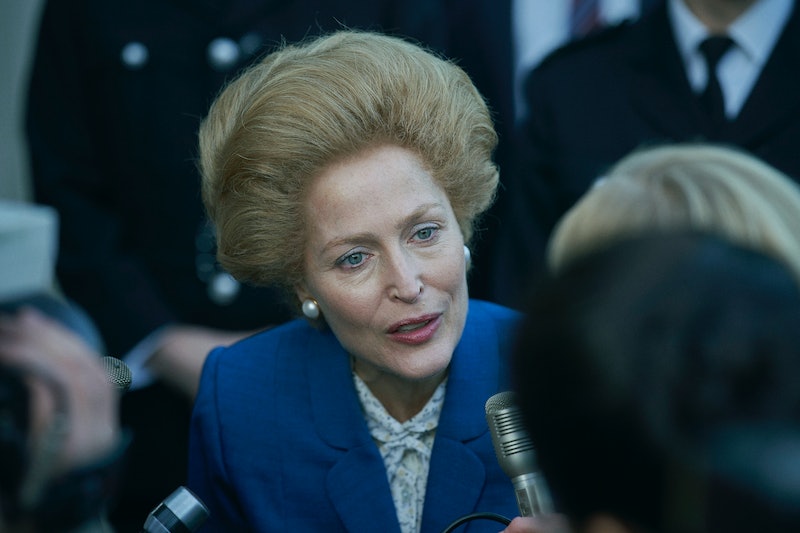 When Queen Elizabeth first meets Margaret Thatcher in The Crown, she’s excited about the opportunity to connect with her first woman prime minister. But any hope that they'll have a unique bond quickly dissipates when Thatcher reveals she hasn’t considered any women for her cabinet because they "tend not to be suited to high office.”

It’s the start of a fraught relationship between the two throughout Season 4 as they clash over their often conflicting viewpoints. It’s also one that’s relatively accurate: though neither woman ever went into much public detail about their differences, their real-life relationship bore great strain and public scrutiny throughout Thatcher’s record-breaking 11 years in office. Between her run from 1979 to 1990, Thatcher claimed to have only “one deliberate intent”: “To change Britain from a dependent to a self-reliant society, from a give-it-to-me to a do-it-yourself nation.”

That goal is what causes her to have the most friction with Queen Elizabeth in The Crown. As series creator Peter Morgan explained to the Daily Express, the Queen had a lot in common with her eighth prime minister. “They’re both very resilient, very committed, work incredibly hard, have an extraordinary sense of duty. [And] they both have a strong Christian faith,” he said. But ultimately they had “such different ideas” about what was right for Britain.

While we don’t know whether Thatcher really sat in Queen Victoria’s chair during her infamous “Balmoral Test” at the royal family’s Aberdeenshire home as she does in the show, she did have to borrow Wellington boots after arriving with only high heels packed. She also reportedly hated the annual excursion. In Thatcher’s mind — both in The Crown and apparently in real life — the trips were a “tedious waste of time” and a distraction from her work.

We also get a dramatized version of the purported disagreement between the women that led to an unprecedented Sunday Times article in 1986, which detailed Elizabeth’s alleged concerns over Thatcher’s refusal to issue sanctions against South Africa to help end apartheid. The article stated that the Queen saw Thatcher’s “approach often to be uncaring, confrontational and socially divisive.” And though the palace denied the report, the Queen’s press secretary Michael Shea was eventually credited with the breach.

Beyond that, much of what's known about the Queen and Thatcher’s relationship is speculation. The most Thatcher ever said on the subject was in her 1993 memoir The Downing Street Years, and even that was largely contained to one small paragraph. “Although the press could not resist the temptation to suggest disputes between the Palace and Downing Street, especially on Commonwealth affairs, I always found the Queen’s attitude towards the work of the government absolutely correct,” she wrote. “Of course, under the circumstances, stories of clashes between ‘two powerful women’ were just too good not to make up.”

More like this
The ‘Emily In Paris’ Season 3 Release Date Is Here, Plus The First Footage
By Bustle Staff
The ‘You’ Season 4 First Look Shows Joe’s New Identity And Potential Victims
By Bustle Editors
New ‘Lupin’ Part 3 Teaser Hints That Assane Will “Go Out In Style”
By Brad Witter
Devi Is Going To Meet A “Smoldering Bad Boy” In ‘Never Have I Ever’ Season 4
By Jack Irvin and Gabrielle Bondi
Get Even More From Bustle — Sign Up For The Newsletter