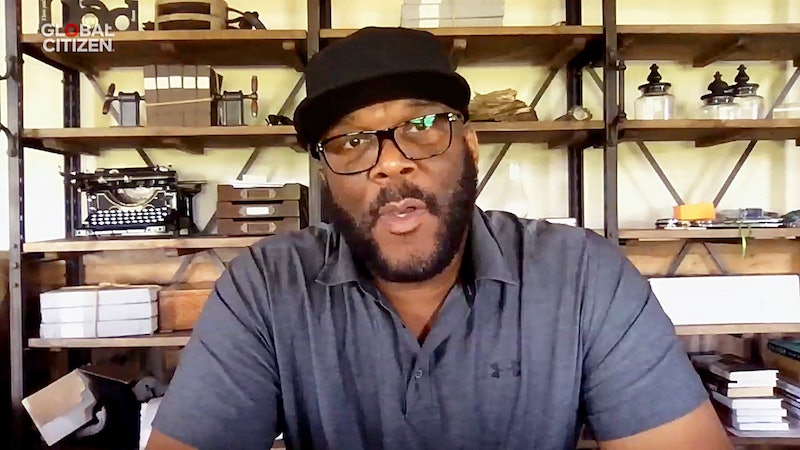 Brave is one word that many people used to describe Meghan Markle and Prince Harry for speaking out about their tumultuous experiences as working members of the royal family in an explosive interview with Oprah Winfrey on March 7, but perhaps the most unexpected hero of the night was the man behind Madea. Entertainment business mogul Tyler Perry let Meghan and Harry stay at one of his homes and provided them with security when Buckingham Palace wouldn't, leading viewers to wonder how the couple even knows the renowned filmmaker.

During the interview, Harry said after the couple had left England for Vancouver, Canada, in January 2020 following their royal exit, they were told "on short notice" that their security detail would be removed. In March, a British tabloid had published their location and the threat of COVID-19 was drastically increasing globally. "Suddenly it dawned on me, 'Hang on, the borders could be closed, we're going to have our security removed, who knows how long lockdown is going to be, the world knows where we are, it's not safe, it's not secure, we probably need to get out of here,'" he recalled.

"We didn't have a plan," Meghan added. Cue Perry, who unexpectedly stepped in and offered one of his Southern California homes, not far from where Meghan's mother Doria Ragland lives, to reside in temporarily. "We needed a house and he offered his security as well, so it gave us breathing room to try to figure out what we were going to do," she said. Many viewers were stunned by the revelation, praising Perry on Twitter for helping them in their time of need.

However, the news wasn't exactly new for devoted royal family followers. Reports surfaced in May that the couple was living in Perry's home, which was confirmed by PEOPLE in August. But Perry played coy when pressed about the rumors by Gayle King in a July interview on CBS This Morning. "I’m sorry, I think I just lost you, Gayle," he joked, placing his hand over the phone. "I’m sorry. We have a really bad connection...I think we lost Gayle King, guys."

It's not known how exactly Meghan and Harry met Perry, but they do have some famous mutual friends, most notably Winfrey herself. However, King already denied rumors that Winfrey set up the family's living arrangement with Perry. "Oprah didn't hook that up," she told Entertainment Tonight. "Harry and Meghan know people. Tyler knows people. Oprah knows people, but she did not make that connection for Harry and Meghan to live in Tyler's house."

This isn't the first time that Perry has shown his generosity. In a 2019 interview with Forbes, Winfrey recalled when Perry flew from Atlanta to her Santa Barbara doorstep to check on her as she was struggling with the launch of her OWN network, calling it "the most distraught I’ve ever been in my life" after it was criticized for low ratings. "He knocked on my door and said, 'I just want to see your face and make sure you’re okay.' Then he turned around and went back home." Perry went on to write the network's first scripted series and create top-rated shows for the now-revered channel, including The Have and the Have Nots and Love Thy Neighbor.

Eventually, nearly four months later, Meghan and Harry moved into their own family home in Montecito, Calif., 100 miles north of LA. But the couple was no less grateful for Perry's act of kindness. "They have endless gratitude to him for helping them during a complicated time," a source close to the couple told PEOPLE in August. "With COVID and as they were stepping back from their royal duties, he provided them a safe haven."