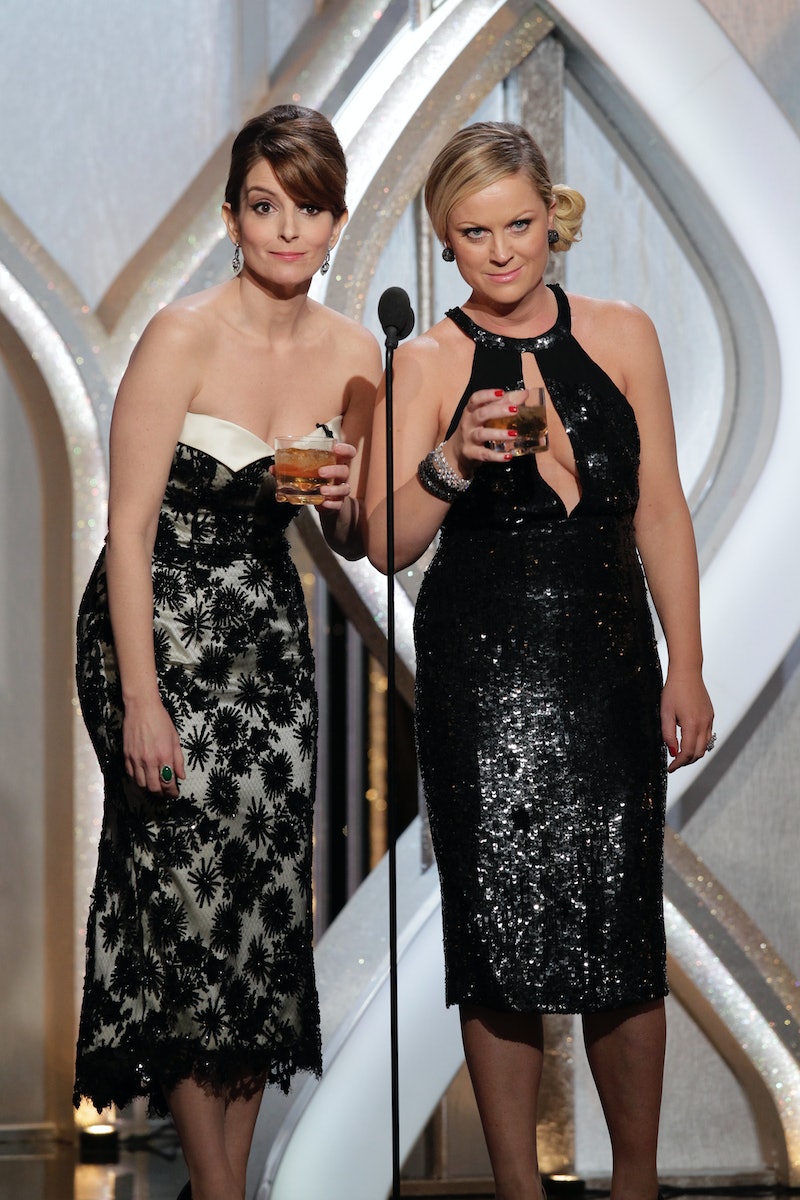 Look, it only makes sense, the 78th annual Golden Globes ceremony is scheduled for a Sunday night, and you want to know how late you might be staying up ahead of the work week. That tracks. Lucky for you, despite being a live event, the ceremony is meticulously scheduled to fit within a specific runtime. That's why when it comes to wondering how long the 2021 Golden Globes are, there's a really simple answer (with maybe a few caveats): it's three hours long, scheduled to run from 5 p.m. PST (8 p.m. EST) to 8 p.m. PST (11 p.m. EST).

This year's ceremony will be hosted live by Tina Fey and Amy Poehler, though they won't be together in Los Angeles at the Beverly Hilton ballroom, where the ceremony takes place. Instead, Fey will be hosting from the Rainbow Room at Rockefeller Center in New York City while Poehler takes on hosting duties live from the Beverly Hilton ballroom. There won't be an audience either due to the still-ongoing novel coronavirus pandemic.

Over the past few years, the awards ceremony took place over three hours, and current listings for the show slate it to end at 11 p.m. EST, according to NBC local news affiliate KGW8. All said, this year's event is still very much a live event, and proceedings can easily be interrupted, resulting in delays. That goes double for this year, given that it's now a bi-coastal event, with Fey clear across the country from Poehler. (Expect some Zoom conference jokes.)

If you add on the Golden Globes' livestreamed pre-show, which will be hosted on Twitter via the @goldenglobes Twitter account and goldenglobes.com, audiences can expect to be tuned in to all things Golden Globes for about four and a half hours. The pre-show begins at 3:30 p.m. PST (6:30 p.m. EST) and runs right up into the premiere at 5 p.m. PST (8 p.m. EST).

More like this
What’s New On Netflix: Ana De Armas’ 'Blonde' & A Nick Kroll Special
By Arya Roshanian
Here’s Everything Coming To & Leaving Netflix In October
By Jake Viswanath
What’s New On Netflix: Meet 'The Real Bling Ring'
By Arya Roshanian
How To Stream 'The Woman King'
By Morgan Leigh Davies
Get Even More From Bustle — Sign Up For The Newsletter