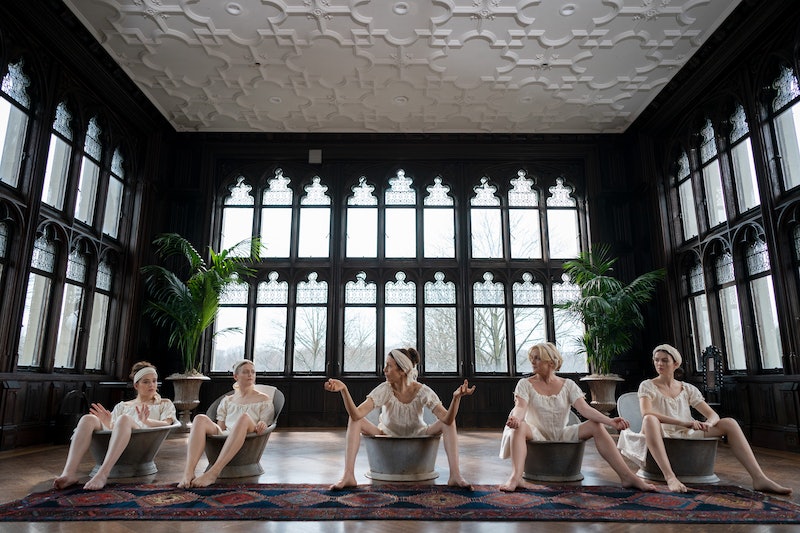 via the Apple TV+ press site

Dickinson’s sensibilities have always erred on the side of modern; it’s the 1850s, but we still see characters use slang or dancing to contemporary music. But in “Forever - is composed of Nows,” the seventh episode of Season 2, the Dickinson family takes a trip to the spa that features a host of treatments that go beyond a soak in a hot bath or a sit in a sauna.

Among the things that the Dickinson crew try in the episode are: the steam room, a sitz bath, a platza treatment, a mud bath, stretching, dunking, a face bath, a rub down, hot coals, a sage massage, and something called “the cocoon rebirth.” And though the show has often reveled in anachronisms, most of what you see in Dickinson’s trip to the spa reflects either real practices or the start of spa practices that are still around today.

“We get to take a deep dive into some pretty fascinating subjects and mid-19th century spa treatments, [which] as you can imagine is a delightfully entertaining rabbit hole,” says Dickinson production designer Neil Patel. “There are lots of great illustrations from the period of the treatments like the wet sheet wraps, mud baths, soaking tubs and one hilariously simple treatment of having a bucket of water dumped on you from an attendant on a ladder!”

Some of these practices date to traditions far older than 1850s. Spas and bathhouses have a much more ancient history in other parts of the globe, dating back in some form to ancient Middle Eastern, Japanese, and Greek cultures. However, the U.S. has its own unique relationship to the practice, and even to bathing.

Some of the images Neil Patel used in his research of "Forever - is composed of Nows."

As newfound enthusiasm for bathing blossomed throughout the Western world — and at a period when Western medicine didn’t have much relief to offer many ailments — spas sprung up in European areas as a cure-all for anything and everything. “People went to the spas in hopes of curing everything from cancer to gout,” David Clay Large writes in his book The Grand Spas of Central Europe. U.S. residents hoped to emulate the “curative” and “cultured” customs of European bathhouse life.

By the 1800s, spa villages, towns, and resorts started popping up across the States. Travelers would stop in for a “water cure” at sites situated around hot and cold springs. Typically these spas were for more than just day trips, as seen in the episode; patients would often stay for months at a time.

It didn’t matter that the treatments were often just as physically uncomfortable (or more) than Mrs. Dickinson finds them in Episode 7. The hydrotherapy methods often got rave reviews from participants. And one of the primary advantages for the time was that spas like the one seen in Dickinson provided clean water; the spread of disease was so bad (and misunderstood), that the city of Boston actually passed a law in 1845 to ban bathing in the winter to head off outbreaks.

“Since this was a time when people did not have plumbing in their houses, the idea of a clean hot bath and lots of fresh water to drink was quite appealing,” says Patel, noting the connection between the 1850s spa fad and the modern wellness culture for treating ailments beyond the reach of medicine. “It was a way to have a retreat and be pampered and was mostly though not exclusively frequented by women.”

There were some spa treatments (like the "steam box treatment" shown above) that didn't make the cut. That may not be the worst thing — while the women of Dickinson end the episode on a high note, some of the most chilling treatments lost to time (like "injections of cold water into the vagina or urethra") are best left in the past.