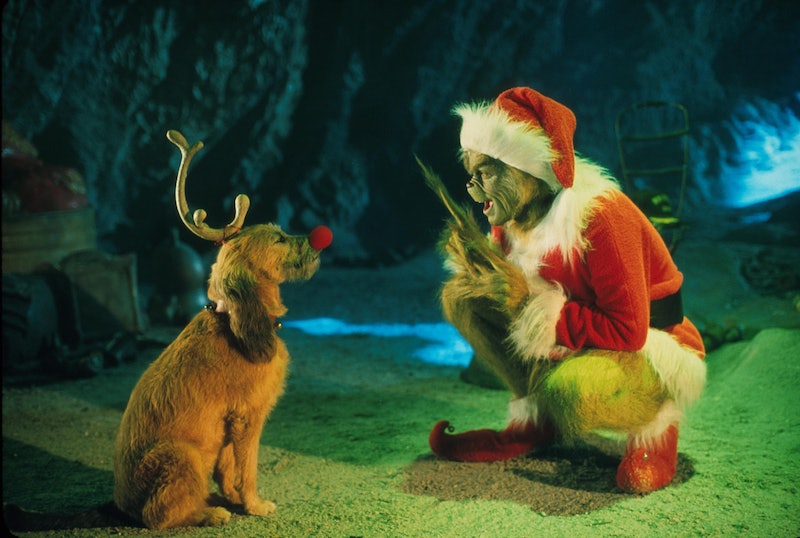 In 2000, Hollywood decided audiences needed a live-action movie starring Jim Carrey as the terrifying-looking green creature from Dr. Seuss’ How The Grinch Stole Christmas. The film later won multiple Oscars, became one of the highest-grossing holiday films of all time, and remains one of the most beloved Christmas specials to date. But the real star of the movie isn’t Carrey as the Grinch; it’s Max the Dog, his ever-loyal best friend.

According to the Animal Humane Association, Max is played by six different mixed-breed shelter rescue dogs: Kelly, Chip, Topsy, Stella, Zelda, and Bo. Lots of harnesses and precautions were employed to bring Max's scenes to life, and it was worth it, too — that pup is the best part of the movie. "Max is much more than just the Grinch's loyal dog and unwitting accomplice," the Animal Humane Association wrote on its website. "In fact, Max may be the true hero of the story, as his humor, devotion, and likeability outshine even the Whos down in Whoville."

Here's why Max will always be the true highlight of How The Grinch Stole Christmas.

This pup stands by his owner through it all — even the Grinch's deranged plan to, you know, steal Christmas from Whoville. "Max is the world’s greatest dog, let alone the Grinch's best companion,” actor Benedict Cumberbatch, who voiced the Grinch in a 2018 animated adaptation, told USA Today. “Anyone should be so lucky to have a Max in their life."

The Grinch dresses Max up as Rudolph the Red-Nosed Reindeer to lead his stealing-Christmas sleigh, and Max is kind of willing to roll with it — until his owner realizes the whole thing is a bad idea.

3. He Listens To His Intuition

In the above scene, Max instinctively knows the Grinch is not in a good mood based on his tone of voice, and he goes to hide. What a smart dog. Max also uses his interpersonal skills to steer the Grinch in the right direction — sometimes literally. With just a bark or blink of his large eyes, he can keep his green friend in check. Chuck Jones, who directed the 1966 animated movie, said in a 2016 interview that he believed “Max the Reindeer Dog” was the most important character in the story because he ultimately represents the audience.

Max is quite an inquisitive dog and very observant of his owner — always looking out for the Grinch. "Max sees something the audience is not seeing. He knows this guy," Scott Mosier, who directed the 2018 movie added to USA Today. “It’s that unconditional love that makes Max so appealing.” I mean, someone's gotta do it.

He can do so much, including leading a sleigh (even though he's not a reindeer). Animal trainer Roger Schumacher spent more than three months practicing with the dogs prior to filming, per Humane Hollywood. Although a dog named Kelly performed most of the stunts, the other five dogs also had their own specialties: Topsy was “the resident scratcher,” Zelda was trained to scoot in a sitting position, Bo pulled the sleigh, and Stella could speak and back up.

Just look at him. "It’s those cute puppy eyes,” Cumberbatch added in his 2018 USA Today interview. “It’s all about the eyes."

More like this
These 25 International Horror Movies On Netflix Prove Fear Is A Universal Language
By Bustle Editors
What’s New On Netflix: Ana De Armas’ 'Blonde' & A Nick Kroll Special
By Arya Roshanian
12 ’90s Movie References You Missed In 'Do Revenge'
By Radhika Menon
Florence Pugh Reflected On Her ‘Don’t Worry Darling’ Experience On Opening Day
By Brad Witter
Get Even More From Bustle — Sign Up For The Newsletter

This article was originally published on Dec. 23, 2016