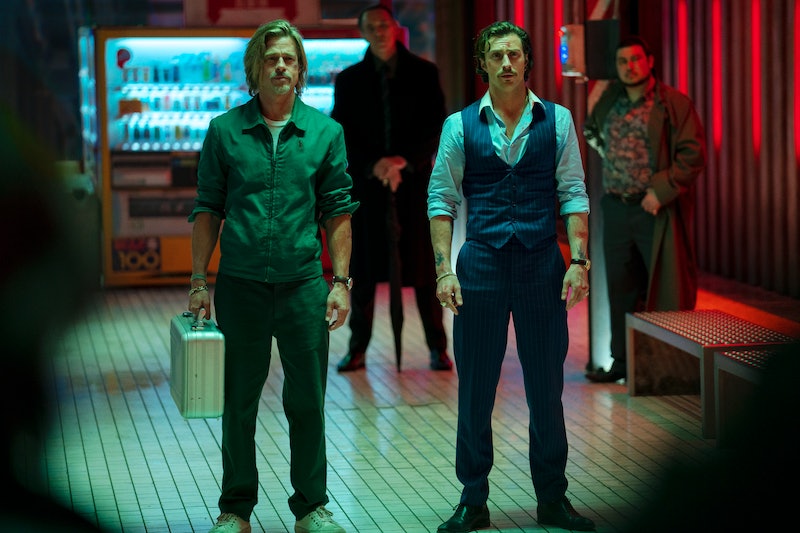 All are welcome aboard the Bullet Train — even those who missed the film in theaters earlier this year.

Director David Leitch’s Bullet Train, based on Kōtarō Isaka's satirical mystery novel, hit theaters on Aug. 5, 2022. It’s a bloody, fast-paced action-comedy that doesn’t take itself too seriously (think Kick Ass meets Murder on the Orient Express, with a dash of Snakes on a Plane). The story follows a group of assassins on interconnected missions aboard a Hayate train from Tokyo to Kyoto, who find themselves engaging in blood-soaked hijinks once their paths cross. Brad Pitt, Aaron Taylor-Johnson, Hiroyuki Sanada, Michael Shannon, and Joey King star, and even more A-listers — like Sandra Bullock, Bad Bunny, Channing Tatum, and Ryan Reynolds — feature in cameos. Altogether, it’s a classic, action-packed Hollywood blockbuster.

So when can audiences watch the film at home? Below, find out how to stream Bullet Train.

When Is Bullet Train Coming To Netflix?

Bullet Train will become available on Netflix as part of a historic deal between Sony, the film’s distributor, and the streaming service on December 3.

Until then, Sony has already made Bullet Train available to rent or purchase on VOD platforms like Prime Video, Google Play, Apple TV, Vudu, and others.

What Are Critics Saying About Bullet Train?

Not all critics are eager to board this train — at the time of its initial release, Bullet Train received mixed to negative reviews, and nearly all critics agree that the two-hour film fails to arrive at a clear destination. In a more positive review, Entertainment Weekly’s Leah Greenblatt says the film “largely delivers on the high-speed berserkery of its premise,” but “doesn't have a destination, really, or a moral imperative other than mayhem.” Similarly, Peter Debruge wrote in Variety that Bullet Train “may be a fun enough ride,” yet “neither the characters nor the film they inhabit are particularly deep.”

Some critics, however, weren’t as forgiving. David Rooney called it a “thrill-free thrill ride” in his review for The Hollywood Reporter, criticizing the filmmakers for being “so busy delivering violent action with a self-satisfied wink that its contorted plotting and one-note characters get real tedious real fast.”

More like this
How To Stream 'White Noise' On Netflix
By Grace Wehniainen
How To Stream Knives Out 2: When Will Glass Onion Be On Netflix?
By Radhika Menon
Here’s Everything Coming To & Leaving Netflix In December
By Jake Viswanath
You Can Finally Stream 'Ticket To Paradise' At Home
By Chloe Foussianes
Get Even More From Bustle — Sign Up For The Newsletter

This article was originally published on Aug. 5, 2022