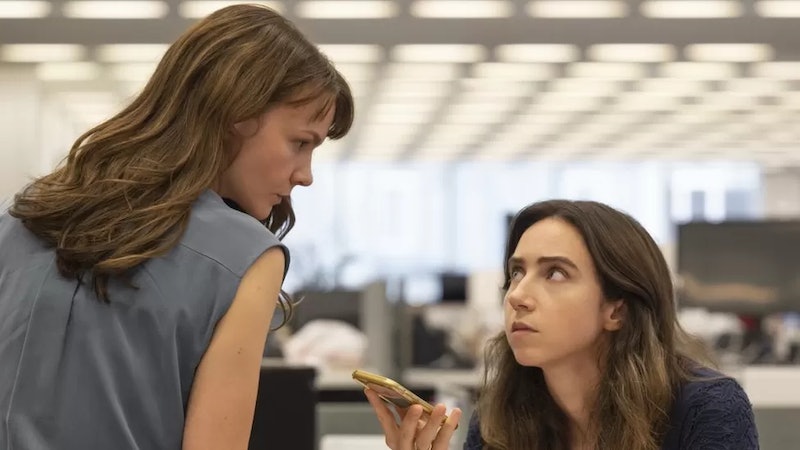 One of the most high-profile cases of the #MeToo Movement is that of producer Harvey Weinstein’s abuses. Two journalists from The New York Times broke the story in 2017, exposing a series of allegations from women against Weinstein, which Megan Twohey and Jodi Kantor published in their 2019 bestselling book She Said. Now, a film under the same name has arrived. She Said is a biographical drama following the true story of Twohey and Kantor as they work to expose sexual abuse allegations against Weinstein. So, how can UK viewers stream She Said?

The film will be released in select cinemas across the UK on Friday, Nov. 25. As well as a theatrical release, U.S viewers will also have the option to stream She Said on HBO Max. However, unfortunately, UK viewers will have to wait a little while before they can stream the film as there are currently no options to do that.

She Said follows the journey of how Twohey and Kantor uncovered a number of women’s testimonials against Weinstein, amassing off-the-record stories from Rose McGowan, Ashley Judd, Gwyneth Paltrow, and former assistants to Weinstein. In 2020, their investigation contributed to Weinstein eventually being convicted to 23 years in prison for rape and sexual assault.

Starring in the film is two-time Oscar nominee Carey Mulligan (Promising Young Woman) and Emmy nominee Zoe Kazan (The Big Sick). The pair portray the journalists at the centre of the film. “[I felt] a huge amount of responsibility towards the subjects of the film and towards everyone who contributed to the original story,” Mulligan said. “The fact that it was these two women, with a collection of incredibly courageous survivors and witnesses, that ran this story that really changed the world. I think that deserved a place in history.”

Kazan also shared her feelings of responsibility in the portrayal of this story. “Right now, it feels like an inevitability that Harvey Weinstein would be brought down because of his behaviour. But in 2017 when they were putting the story together [it] was anything but.”

More like this
Rachel Nickell’s Son Wants The Police To Take Accountability Over Errors
By El Hunt
Yes, You Can Stream ‘To Leslie’ In The UK Now
By Sam Ramsden
A New Netflix Doc Will Explore The Unsolved Murder Of Jill Dando
By Sam Ramsden
Channing Tatum “Nearly Killed” Salma Hayek During 'Magic Mike' Lap Dance
By Sam Ramsden
Get The Very Best Of Bustle/UK
Sign up for Bustle UK's twice-weekly newsletter, featuring the latest must-watch TV, moving personal stories, and expert advice on the hottest viral buys.