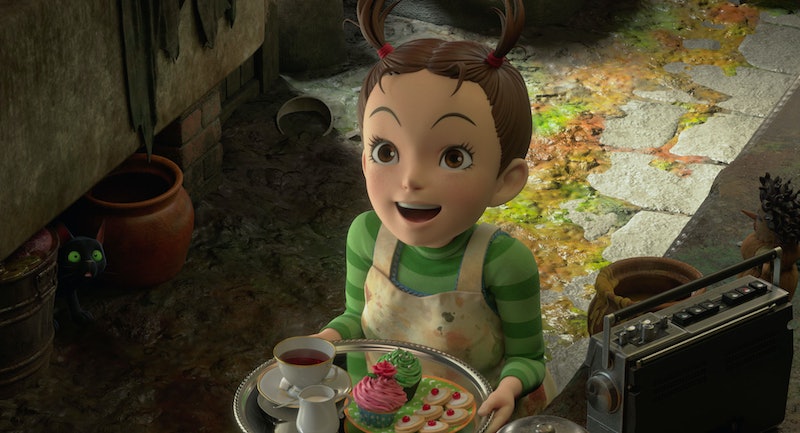 Earwig & The Witch, the first fully 3D-animated film by the legendary Studio Ghibli, is reportedly ready to land on UK shores in a matter of weeks. Based on the book of the same name, the film tells the story of a young orphan named Earwig who is taken in by a grumpy witch named Bella Yaga before going on a search for her true identity. The new movie debuted on HBO Max earlier this week, but how to watch Earwig & The Witch in the UK?

Well, while there's no confirmed date, a representative at Elysian – the film group handling UK press for Earwig & the Witch – has said that they're hoping to release the film in cinema either late March or early April, depending on COVID restrictions. Unfortunately that's all the information we have for now, but I'll report back as soon as I hear anything new.

Ahead of its UK release, what should viewers expect? As previously mentioned, Earwig & The Witch is the Japanese studio's first 3D and CGI film, which will feel decidedly different from their previous works including Spirited Away and My Neighbour Totoro.

Speaking about the decision to use a different animation technique, director Gorō Miyazaki said in a press release that the studio wanted to do "something new". "If we don’t incorporate new things, then there’s probably no future for us," he said. "That’s what it comes down to. That’s why it would be something that rivals the hand-drawn style. In the world these days, animation is mostly in 3DCG, so in that sense, I thought that we really should incorporate 3DCG."

Earwig & the Witch will introduce viewers to a brand new childhood hero. Earwig is certainly a tough cookie, with some hidden magical talents of her own. Speaking about the cast of characters in this film, Miyazaki said it was their "very quirky" nature that he found most interesting.

For the English version of the film, Taylor Paige Henderson voices Earwig, while Vanessa Marshall takes on the voice of witch Bella Yaga and British acting royalty Richard E. Grant takes on the voice of a strange, demon-like musician named The Mandrake. Plus, there will be music from country singer Kacey Musgraves.

Per the synopsis, Earwig will go on a journey of self-discovery mixed with potions, spells and music.

"Growing up in an orphanage in the British countryside, Earwig has no idea that her mother had magical powers," reads the synopsis. "Her life changes dramatically when a strange couple takes her in, and she is forced to live with a selfish witch. "

It adds: "As the headstrong young girl sets out to uncover the secrets of her new guardians, she discovers a world of spells and potions, and a mysterious song that may be the key to finding the family she has always wanted."