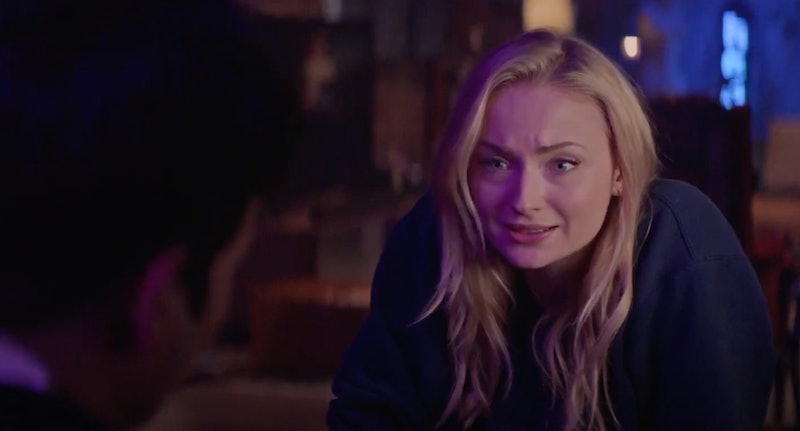 Described as Bonnie & Clyde meets True Romance, Heavy sees Sophie Turner as the girlfriend of a successful drug dealer who gets a bit too confident in his ability to push product. Initially debuting at the Deauville American Film Festival in France back in 2019, the film finally has an official release date. So here's how to watch Heavy in the UK.

Premiering alongside the likes of The Lighthouse and Swallow, Heavy is due to be made available on streaming services in the United States on Feb. 9, according to Deadline. As for UK viewers, there's no word yet on whether Heavy will be available to stream on the likes of NOW TV or Amazon Prime. Bustle has reached out to the film's American distributor for more info on a UK release, and is awaiting a reply.

The directorial debut of Jouri Smit, Heavy takes place in the "high-end drug scene of New York City", where Seven 'Sev' Max (played by Daniel Zovatto) is enjoying success as one of the major dealers. Events take a turn when a childhood friend reemerges with a shady deal, and he risks everything – including his soulmate Maddie (Turner) – for the potential monetary gains involved. "It tests the boundaries of their relationship," Turner told France24 Encore. "The drug use is almost a metaphor for not really being able to see what's right in front of you [...] like being caught up in all these other things and not genuinely seeing what's right there."

When asked how much her Heavy character Maddie differs from that of Sansa in Game of Thrones, Turner said that she was more anxious about what her mum would think of this role than her GoT counterpart. "It was really strange doing [drugs] on screen, I felt like my mum was watching constantly," she said. "I think the thing that would make my mum most disappointed in me would be if she saw me doing drugs, so knowing my mum's going to see [the film at some point] is just a terrifying concept to me."