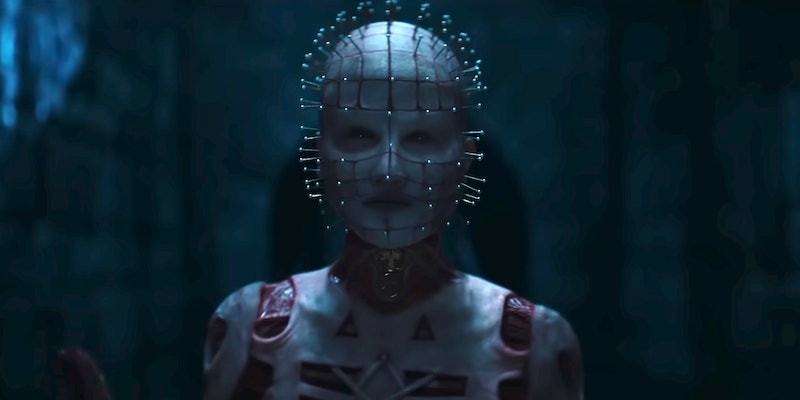 Happy (early) Halloween. Cult 1987 horror flick Hellraiser is lined up for a present-day reboot, with Sense8 and The L Word: Generation Q’s Jamie Clayton playing its iconic villain Pinhead. Originally written and directed by horror and fantasy author Clive Barker, the flick often tops lists of must-watch horror films. The plot centres around a mysterious puzzle box with a highly cursed aura — and the troubling ability to summon up a cult of sadomasochistic demons called the Cenobites.

When certain humans get a hold of the magic box, they expect to find a world of hedonism waiting on the other side, but unfortunately, the Cenobites have lost the ability to differentiate between pain and pleasure. In other words, their interpretation of S&M is less like Rihanna’s dancefloor banger of the same name, and more like getting tortured and experimented upon for all eternity.

An updated version of a classic, the David Bruckner-directed refresh centres around “a young woman struggling with addiction [who] comes into possession of an ancient puzzle box,” according to Hulu’s synopsis. Unfortunately, she’s “unaware that its purpose is to summon the Cenobites, a group of sadistic supernatural beings from another dimension.” Uh Oh!

At time of writing, there’s no UK release date for the horror reboot, which airs in the U.S. on Oct. 7 via Hulu. Though a UK network hasn’t been announced yet, Disney+ could well be a good shout, since The Walt Disney Company has majority ownership over the streaming platform and frequently gives a second home to Hulu shows.

More like this
The 'Love Actually' Reunion Is Missing A Major Player
By Bustle UK
How To Stream 'She Said' In The UK
By Maxine Harrison
'Bridgerton' & 'Succession' Casts Join Forces For A New Dickens Adaptation
By Darshita Goyal
Robert Downey Jr.’s New Film Is A Tender Story of Fatherhood & Forgiveness
By El Hunt
Get The Very Best Of Bustle/UK