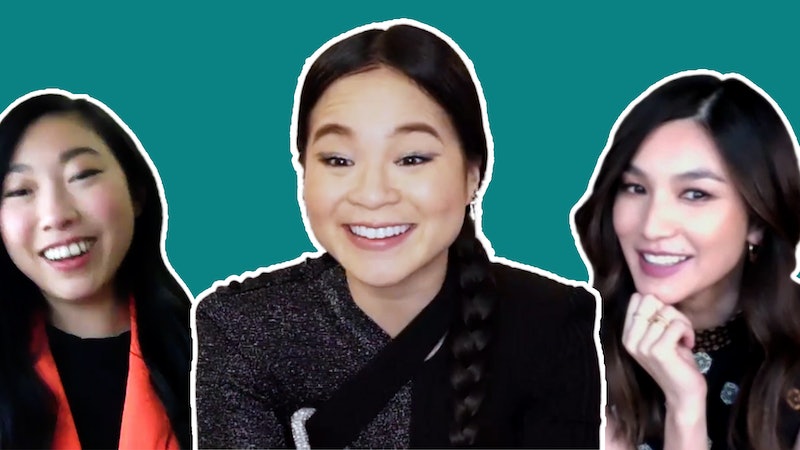 Just like you haven’t seen your co-workers in person for almost a year, Awkwafina, Kelly Marie Tran, and Gemma Chan never actually met during the recording process for Disney’s Raya and the Last Dragon. While Tran and Awkwafina spent a little time in the studio recording (separately) before recording at home, Chan recorded everything at home, and after the pandemic officially hit, they all made makeshift booths of blankets and salt lamps. (The warmth of the lamp is key, apparently.) One year in, we find it slightly comforting that even our favorite Hollywood stars spent 2020 working from home.

So we met them on the day they spent the most time together (on Zoom, of course) — press day! We asked them about their early acting days, their pre-acting days (two of them almost went to law school and the other was a journalism major!), and how their personalities were perfectly crafted for the characters they play and who was most likely to cry at the end of the movie. It was clear that while these three didn’t know a lot about each other at the beginning, they highly respected each other and knew just enough to consider moving in together. And if you're feeling like you could watch, say, 177 more minutes of this delightful trio, then check out Raya And The Last Dragon on Disney Plus.

More like this
Brendan Fraser's Emotional Critics Choice Awards Speech Is Total Tearjerker
By El Hunt
Owen Thiele Asked Sundance Attendees About Films That Don’t Exist
By Grace Wehniainen
Twitter Is Overjoyed By Angela Bassett’s Record-Making Oscar Nomination
By Maxine Harrison
The 'Scream 6' Trailer Shows Off Hayden Panettiere's Return & Ghostface In NYC
By Jack Irvin and Jake Viswanath
Get Even More From Bustle — Sign Up For The Newsletter
From hair trends to relationship advice, our daily newsletter has everything you need to sound like a person who’s on TikTok, even if you aren’t.