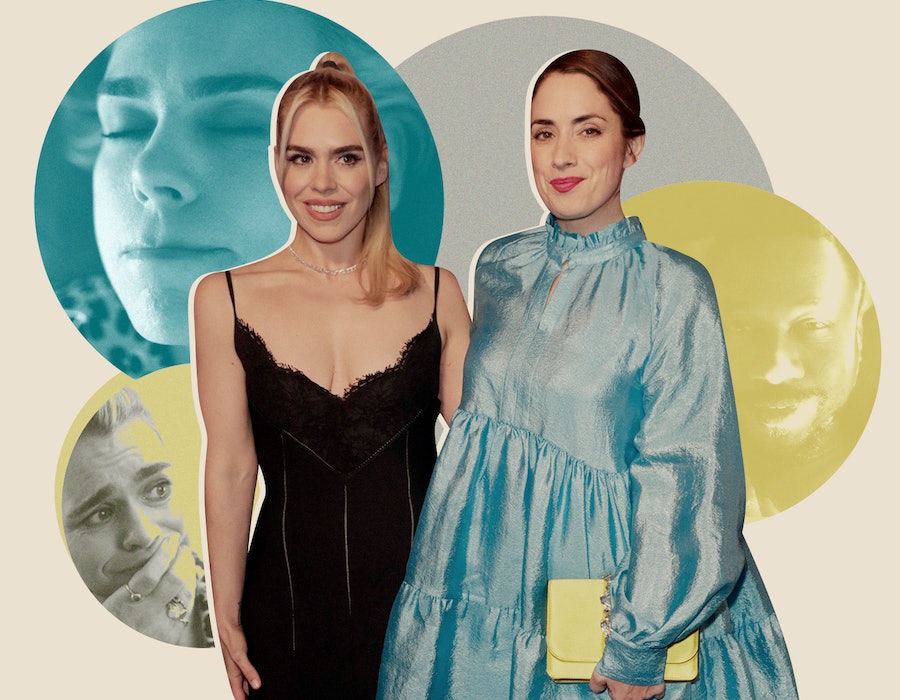 Nobody knows better than Suzie Pickles that sex can blow up your life. At the start of HBO Max's I Hate Suzie, the titular teen-pop-star-turned-B-list-actor finds herself in a tailspin after a hacker publishes explicit photos of her with a man who isn't her husband. What follows are eight witty, surreal, and devastating episodes structured around the stages of grief, each one zeroing in on a specific emotion as Suzie (played by co-creator Billie Piper) grapples with the leak's public and private fallout.

"It's very hard to tell story in sex," Prebble tells Bustle. "That's [what] we were trying to do with this episode, is go, 'Can you actually reveal and tell story and reach epiphany through sex or sexual thoughts?' Because normally sex scenes don't do that." At 35 minutes long, the resulting episode is compact yet stuffed with big ideas about fantasies and the often confusing nature of female desire. Below, Piper and Prebble talk about the male gaze, working with intimacy coordinators, and "being as loyal to a wank as possible."

When you normally write drama, it’s often external, it’s often conflict-based — it’s often like a protagonist has an obstacle and they have a want, and that is very clear. And I thought, I wonder if it’s possible to write something that’s more like how you browse the internet — less narrative, more following a thought process. And then you’re thinking, well, what’s the obstacle that helps [move the story forward]? And the obstacle in this case is Naomi, or her conscience, critiquing her wank.

Billie Piper: I guess the things we wanted to avoid was anything that felt untrue and hypersexual in a way that we’re sort of used to seeing sex be — sort of showy and performative, where everyone looks great and everyone’s really loving it. [We were] just trying to be as loyal to a wank as possible!

Piper: It’s very domestic, the wanking. It’s interrupted frequently by life, and that again feels very true. You have a limited amount of time to get things in, you know?

There are a lot of ideas in this episode about what someone's desire says about them. How did thinking about Suzie’s desires in bed help build out her character?

For example, when Naomi challenges her to think about something really different and she [imagines] a police station with some Scandinavian cops, like a noir drama, you can see from that that she’s drawing on other sources of what is sexy. Like, Oh, that sort of thing is sexy, you see that on the TV.

In a way, that feels universally female, trying to separate what you want from what the world wants of you. Was that something you were aiming to explore on a more macro level throughout the show?

Piper: Yeah, god, we thought about that a great deal. I was talking just last week about how when I ask my mom what she wants she can’t answer [me], and it really boils down to the fact that no one’s ever asked her. She sort of served everybody else her entire life and now she can’t answer a simple question.

Prebble: There is a porousness that I do think is quite female or is associated with women, where it can be quite confusing whether you want something or someone else wants something and you’ve taken it on. When women have children, that is a very necessary part of that — the sort of obliteration of a very clear self in favor of you giving birth to someone else whose desires and wants supersede yours for a period of time, if not forever.

In terms of sex, there is a confusion sometimes as to whether you’re aroused or you’re aroused by someone else’s arousal of you. When you’ve grown up seeing mostly straight male pornographic images of what is sexy, or even in advertising and in culture generally, that can be quite confusing to work out: Do I think it's hot as a straight woman when two women have sex, or is that something I’ve absorbed from the male gaze and isn’t mine? And that sorting out of what does and doesn’t belong to you is quite a long process.

The moment when Suzie finally reaches orgasm imagining her lover telling her she’s beautiful enough, clever enough, and happy enough feels like the thesis of the episode.

Prebble: That's one of my favorite lines in the show — when she’s having that interchange with Carter and she says, “Am I happy enough?” and he says, “You’re so happy.” It’s an epiphany and an orgasm, and the epiphany is she’s not happy the rest of the time. What’s dark and beautiful about that moment is it’s a very rare moment that she was happy, and that’s why she’s able to orgasm, because she’s remembering being that free and relaxed and happy. Also, she’s asking him if she’s happy and he’s telling her that she’s happy. And that’s when it’s real for her. That's really sad and beautiful and says a lot about love but also who she is, which is somebody who can’t tell if she’s happy or not unless someone tells her, particularly a man.

This episode delicately weaves together flashbacks and surreal fantasies. Logistically, what was the hardest part of making it?

Piper: I would say some of the problems came in the post-production, in the editing phases, where we’re just trying to make the narrative work.

Prebble: Yeah, for storytelling and editing it was by far the most difficult [episode], because it was doing something quite unusual [by] not following traditional narrative arcs [and] only moving within somebody’s mind. It was useful to have the Naomi storyline to cut to on the train, because originally in the script we had some fantasy elements to that as well, things that Naomi was imagining on the train, like how she was gonna confront this guy [who was masturbating next to her], and we ended up taking all of them out so that we had a pure, dull, naturalism to cut to. That made cutting back to Suzie’s fantasy that much clearer.

Usually when actors are involved I really want to be careful about how they feel about shooting sex scenes. Because it’s a show about a woman who is exposed in a way that she doesn’t want to be, I really didn’t want us to do anything similar to that with the actors involved.

Piper: We had an intimacy coordinator this time. I‘ve done a lot of sex scenes in my career, and that wasn’t a thing. And it meant that we had to talk about what we were about to do sort of in a step-by-step process. When you get over the sort of silly embarrassment of saying, "And now I’m going to go near your penis," or, "I’m going to reach for your breasts," it starts to feel more like a dance, like a piece of choreography, [and] there are merits in that.

It all felt very real and natural and it wasn’t about having my ass buffed for an hour before we got on set, do you know what I mean? It so often is.

I Hate Suzie is streaming in full on HBO Max.

More like this
Everything To Know About 'And Just Like That...' Season 2
By Jack Irvin and Grace Wehniainen
Here’s What Happens To Bill & Frank In 'The Last Of Us' Video Game
By Brad Witter
The 'Gossip Girl' Reboot Creator Is “Looking For A New Home” To Air A Potential Season 3
By Brad Witter
The 8 Best Aidan Shaw Moments On 'Sex And The City'
By Grace Wehniainen
Get Even More From Bustle — Sign Up For The Newsletter
From hair trends to relationship advice, our daily newsletter has everything you need to sound like a person who’s on TikTok, even if you aren’t.