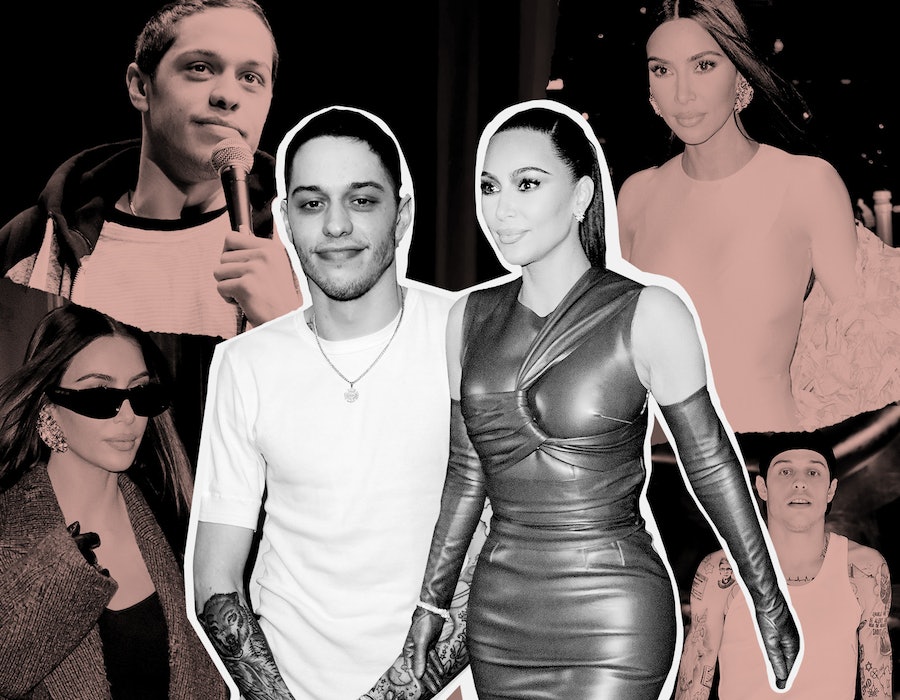 Unless you’ve been living under a rock, you’re probably aware that professional hot person-slash-newly minted shapewear mogul Kim Kardashian has been spotted canoodling with professional comedian-slash-famous person dater, Pete Davidson. To be fair, the canoodling has been minor — they were photographed holding hands on a roller coaster they were riding together (which does have plausible deniability. Who hasn’t grasped at a friend’s hand during a scary fall!?). But if recent news articles (and anonymous postings on the Instagram gossip blog Deux Moi) are to be believed, the two are, well, an item.

Ever since Pete Davidson’s whirlwind engagement to Ariana Grande, he’s been the Birkin Bag of young Hollywood — appearing on the arm of every “oh, yeah, I know her!” actor at one point or another. So far, his dating history has ranged from Kate Beckinsale (unexpected!) to Margaret Qualley (okay, sure) to Kaia Gerber (boring) to Phoebe Dynevor (a waifish brunette for spring? Groundbreaking). His who’s who approach to dating has become meme unto itself — Pete Davidson’s extremely public private life has been nothing if not excellent fodder for gossip, discussion and speculation — it was, after all, Pete who was the origin for the popularization of the term BDE.

So his fling with Kim Kardashian, whether it’s two souls finding each other or a cynical tabloid maneuver, should have been expected; he’s the person who became extremely famous for dating famous people, and she is, arguably, the most famous woman in the country. And yet, in the words of one of my friends upon hearing that the couple may have gotten a private dinner together on Staten Island: “Things feel out of control. Things feel absolutely out of control.”

A hot divorced lady met an incredibly charming, hot single guy at a work gig and they kept in touch.

That, my friend, is why I love this relationship, or fake relationship, or attention-grabbing flirtation. It eschews all of our closely held understandings about how celebrity relationships should work. It’s not just their 14-year age difference, although of course society is still primed to be shocked by an older woman dating a younger man. It’s that they seem to be from different realms of celebrity, and different planes of reality. Kim exists in the celluloid world of Los Angeles launch parties, of white Range Rovers, of hair extensions, and Kanye West beige jumpsuits and eerily empty homes as aesthetic. Pete Davidson, for all of his fame, still has the energy of a dude smoking weed with his friends in one of their parents’ basements. The intersection of their public personas is unnatural — a “glitch in the Matrix.” It’s chaos. Good.

Celebrity lives being overly curated to the point of predictability is boring, a side effect of the same social media trends that have sort of made all influencer faces look the same. A famous person doing something completely unexpected in the context of their fame (say, Kim and Pete flirting and maybe hooking up after she hosted SNL) actually seems pretty reasonable if you reframe it as if they were Normal non-famouses: a hot divorced lady met an incredibly charming, hot single guy at a work gig and they kept in touch.

Pete and Kim dating somehow makes me feel like they’re normal people in a way I find compelling for a way I’m not quite sure I can describe. What are they talking about?! What is their text thread like? I want to get the take of everyone I know on this.

To me, the point of celebrities — the type of celebrities who loom larger than what their actual job is, or whatever the impact of their art is — is to be collective conversation pieces. Let us forget our own, dull non-famous lives and judge these strangers for what they wear, what they say, who they date. We get the titillation of gossip without hurting people in our orbit and they receive, in exchange, some amount of money and social cache. A Pete/Kim hookup? Sure! Why not! They’re two of the most successful people in the world at getting people to care about their personal lives. If nothing else, they can talk about what it’s like to be almost-but-not-actually married to Grammy-winning musicians. Or, maybe they just talk about the weather.

More like this
Joey Essex Is Rumoured To Be Dating A 'Love Island' Favourite
By Sam Ramsden
Gemma Atkinson & Gorka Márquez Are Strictly The Sweetest Couple
By El Hunt
Darren Harriott Is Keeping His Love Life Away From The Spotlight
By Darshita Goyal
Who Is Pete Davidson Dating? He & Chase Sui Wonders Got Caught Kissing
By Jake Viswanath
Get Even More From Bustle — Sign Up For The Newsletter
From hair trends to relationship advice, our daily newsletter has everything you need to sound like a person who’s on TikTok, even if you aren’t.