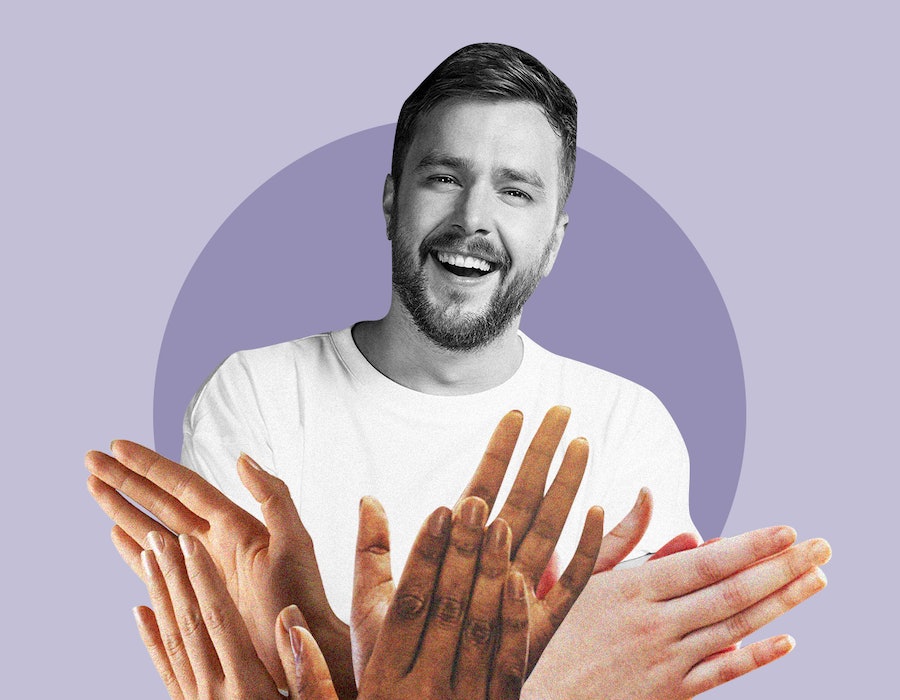 Welcome to Do It For The Applause, a series in which we ask performers, writers, business leaders, and public figures to think about the notion of applause and what it means to them. Today, we hear from comedian, Buffering star and the voice of Love Island, Iain Stirling.

When Iain Stirling and I sit down for our phone call, it’s a sunny morning in mid July and he’s just come in from a walk with his dog (the famous and ever so adorable Mick). Sadly, it wasn’t quite the relaxing excursion he had hoped for. “I don't know if this is oversharing,” he begins, “but he went to the toilet and, it went so badly, it ended up with him having a bath.” Somehow, though, the comedian can still see the upside.

“To be fair, he's been needing a bath for quite some time,” Stirling adds. “Maybe this doggy protest was the kick up the ass that we both needed – no pun intended.”

His attitude to this morning’s events – and just about everything else we discuss during our call – is exactly what you’d imagine from Love Island’s comedic frontman: easy going, endearing, and a bit silly.

But the Celebability star certainly has a more thoughtful side, too. It’s something that’s demonstrated his new sitcom Buffering, which begins airing on Thursday, August 5.

Buffering is a six-part ITV2 series that follows a kids’ TV show host (played by Stirling, who drew from real-life experience at CBBC) living with a group of friends in London. The show is packed full of funny moments (a particular highlight being the desperate lengths Iain’s character will go to to guest star on The Chase) but it doesn’t shy away from the more serious ones, either. In episode two, for example, we see Iain’s character (also named Iain) and his on-again-off-again girlfriend experience a miscarriage.

Explaining why he included both light and shade in the show, the comedian says he wanted Buffering to paint an honest picture of life for millennials existing in what he calls the “inbetweenie stage.” A stage when we’re ageing out of childhood but aren’t quite ready to be adults, either. A stage when we’re all feeling a little bit lost about love, careers, and family. Speaking specifically about the miscarriage storyline, Stirling says, “it’s something me and Steve [Bugeja, his writing partner] have experience in and we wanted to talk about from a male perspective.” In Buffering, Stirling purposefully created a central character with “an inability to deal with conflict head-on,” as he thought that would speak to a great number of viewers.

I also (of course) have a few questions about Love Island. (“It's not an interview with me if it's not mentioned,” Stirling laughs).

So, who’s he backing? (Bear in mind, reader, these answers were provided pre-Casa Amor). “We've got some really lovely couples in there. I'm really excited about Jake and Liberty,” he says. “I'm excited to see where they go.”

He’s also keeping a close eye on Faye. “Every series, we have a girl who goes on a real journey,” he says. “We had Camilla from series three and Jess from series one. And I think Faye has got that written all over her.”

He continues: “The thing I really like about Love Island – having just written the sitcom – is the character developments are really brilliant. Faye was talking about not wanting to open up to people, because she’s been hurt in the past, and then you see her banter-y persona around the boys, and you sort of get that little insight. And then she's talking to the girls [about] why she actually does that. It becomes really interesting. I feel we’ve not had both of those sides of her put together yet, and I think if she meets a boy she likes, we will.”

Next, I ask him a question that’s always interested me: do him and Laura Whitmore (his wife and host of Love Island) watch the show together? Or does it feel too much like work?

No, he says, they’re both huge fans of the show. Often he’ll be working in the voiceover studio during the day and will send Laura updates about what’s gone on, he says. Except, of course, on days when she’s implemented a strict no spoilers policy.

“And then, by the time I get home [from the studio], it’s about 9 p.m. Laura is already watching it on the telly,” he explains. “I won’t tend to sit and watch because, obviously, by that point, I’ve been looking at it for eight hours straight, but occasionally I’ll pop in.”

He adds, laughing “I’m not proud of this but, sometimes, I will make her pause the show and rewind it if I think I've said something funny. And she will humour me.”

Clearly Laura’s approval means a lot to him, which is something we discuss below – along with his feelings on standing ovations, backhanded compliments, and the strangely complex reason why we Brits can’t stand praise.

Probably my wife’s, I think. My family’s in general.

What form do you like your applause to come in? Double taps, five-star reviews, standing ovations, or texts from your nearest and dearest?

With the sitcom, I think for my mental well-being and for personal justification, a text from another comedian saying they enjoyed it would do me for a year. But then, there is literally nothing better than thinking of a joke in the afternoon, putting it on a stage that evening, and it getting a laugh, and hopefully maybe an applause. So I'd have to say standing ovation. Or standing ovation’s maybe a bit excessive. I'd take a sitting down applause in a live setting.

My favourite compliment is when someone genuinely likes something that I've done and they show knowledge of it and show they care about it.

Something I get loads because of doing kids’ TV and then Love Island is people coming up to me and saying, “I don't like it, but my wife does,” or, “my kid does.” So with kids’ TV, I'll get, “I don't know who you are, but my little sister likes you.” Or with Love Island, “I don't like it, but my boyfriend makes me watch it.” That sort of thing. That's my least favourite, when a person is saying, “Someone I know thinks you're quite good but I want to make it very clear to you that I don't think that.”

Not to get too deep, but I think it sort of comes from [Britain’s] imperial background, and then the fall out of World War II and the British catchphrase of “keep calm and carry on.” I think we're very much told, “You've got to hold it together. Carry on. Just do what you've got to do. Don't allow external factors to affect your productivity,” and all that. So I think you sort of go, “I'm just doing what I do and people liking it or not liking it shouldn't affect that. And if there's a bomb happening over my head, I've got to carry on working.” So, with our generation, we were completely infiltrated by the way our parents’ parents lived their lives. Get a house. Get married. Get a job. Pretend you're happy to everyone.

I'd have to say Steve Bugeja, the person I wrote my sitcom with. Because he's really hilariously funny, and a brilliant stand-up. Such a talent.

More like this
This Pre-'Love Island' Video Of Olivia & Zara Together Changes Everything
By Bustle UK
'Love Island’s Kai Fagan Is Very Clear About What He Doesn’t Like
By Sam Ramsden and Darshita Goyal
Laura Anderson Pulled The Ultimate Girl Power After Her Break-Up
By El Hunt and Megan C. Hills
ITV’s New Take On 'Love Island' Is Only For MILFs & DILFs
By Sam Ramsden
Get The Very Best Of Bustle/UK
Sign up for Bustle UK's twice-weekly newsletter, featuring the latest must-watch TV, moving personal stories, and expert advice on the hottest viral buys.