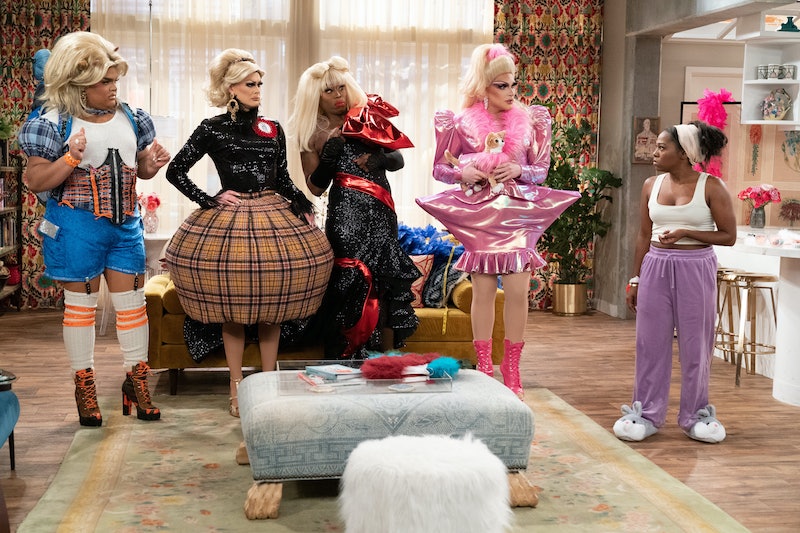 In a clip exclusive to Bustle (watch below), Carly’s best friend Harper (Laci Mosley) is enlisted to style four of Seattle’s most fabulous drag performers for a Hollywood Icons-themed drag night. Harper presents them with sketches of four drag looks based off iconic old Hollywood outfits: Audrey Hepburn in her Breakfast at Tiffany’s little black dress and pearls, The Bodyguard-era Whitney Houston, Marilyn Monroe’s white Seven Year Itch dress (complete with built-in fan), and the most modern look, Reese Witherspoon’s Legally Blonde character Elle Woods. There was one look all the queens wanted for themselves though: “Reese!”

“It’s so wild to have a role on an iconic show I watched 10 years ago” Rosé tells Bustle. “I never would have imagined back then that I’d be making an appearance, nonetheless in drag!”

This episode marks the first time that the worlds of iCarly and Drag Race have crossed over. iCarly has a storied legacy of impressive guest appearances from A-listers, politicians, viral sensations, and nostalgic Nickelodeon stars. The show’s original four-season run featured guests like First Lady Michelle Obama, One Direction (yes, all five members), Tina Fey, Jimmy Fallon, Miranda Cosgrove’s School of Rock co-star Jack Black, and Emma Stone, who made a cameo as a crazed iCarly fangirl, which was fitting since she called iCarly the “best show of all time” in 2012.

READ NEXT: 25 Best Snatch Game Performances On ‘Drag Race’ Ever

After bringing the series back in 2021, Paramount+ is adding to its legacy of guest stars with the Drag Race queens and even more nostalgic appearances. Most recently, Cosgrove reunited with her onscreen Drake & Josh brother Josh Peck, who played Carly’s former QVC producer and new manager on the reboot’s May 6 episode. Perhaps RuPaul is next in line to shake up Carly’s world.